Please ensure Javascript is enabled for purposes of website accessibility
Log In Help Join The Motley Fool
Free Article Join Over 1 Million Premium Members And Get More In-Depth Stock Guidance and Research
By Justin Cardwell - Nov 4, 2019 at 6:54AM

Headwinds from the Department of Transportation and increased competition are putting Hawaiian Airlines in the spotlight.

The pressure is heating up for Hawaiian Airlines (HA -1.38%) after Southwest Airlines (LUV 0.44%) started servicing inter-island routes in 2017 in addition to the newly added long-haul trips from the west coast to the Hawaii Islands in 2019. Servicing passengers throughout seven countries, Hawaiian Airlines relies upon Hawaii travelers to fill most of the capacity -- making the airline vulnerable as competing airlines fight for Hawaii travel capacity.

As most large U.S.-based airlines are now servicing Hawaii routes in one form or another, investors are left wondering if Hawaiian Airlines can stay competitive if this becomes a race to the bottom on fare prices and offerings, lowering Hawaiian Airlines' ability to attract customers -- potentially slowing revenue growth.

Hawaiian Airlines' antitrust immunity application was turned down by the Department of Transportation (DOT) in October. Teaming up in marketing programs with Japan Airlines would allow for competitive pricing and schedules against competitors. The agreement would allow Hawaiian to reach 34 locations throughout Japan in addition to 11 locations in Asia that are outside of Japan -- widening its reach. 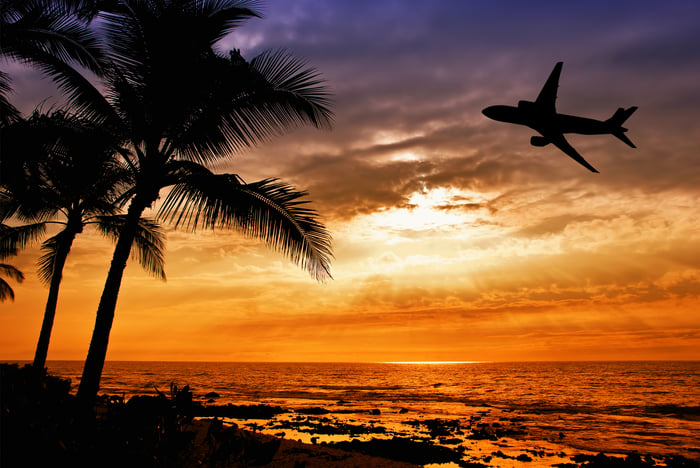 Without the antitrust immunity, Hawaiian Airlines and Japan Airlines cannot coordinate pricing and schedules and can only share in marketing and frequent-flyer programs. This blow from the DOT hinders expansion plans for both airlines, which is why Hawaiian Airlines applied for an extension to prove to the DOT that the immunity is necessary and fair -- which is due November 12.

Currently, Hawaiian is expanding into the Fukuoka, Japan to Honolulu route at the end of November, which will be a nonstop flight from the Hawaiian Islands. In addition, Hawaiian has been approved for Haneda, Japan, and is expected to begin in March of 2020. Hawaiian now operates 31 nonstop flights between Hawaii and Japan, which is set to expand further with an additional four flights between Fukuoka and Honolulu.

Is the Hawaii airspace overcrowded?

The overcapacity of flights from the west coast of the United States to Hawaii is a concern. Alaska Airlines (ALK -1.19%) proclaims itself as the carrier "offering more nonstop flights to and from Hawaii than any other airline." It announced in October that two routes will be canceled due to increased competition. Alaska Airlines will be cutting the alternating daily flights between San Francisco and Sacramento to Kona, and expanding routes from San Jose and San Diego to Kona in 2020.

Alaska Airlines is the second-most-popular airline for Hawaii routes but isn't the only competition in the Hawaii airspace. United Airlines ramped up Hawaii routes in 2017, as did Allegiant Airlines, Delta Airlines, and Southwest Airlines. Overall capacity has been increasing from 2011 at a total passenger count of 30.3 million passengers in an out of Hawaii, to 37.4 million in 2018, a 2.8% compound annual growth rate. 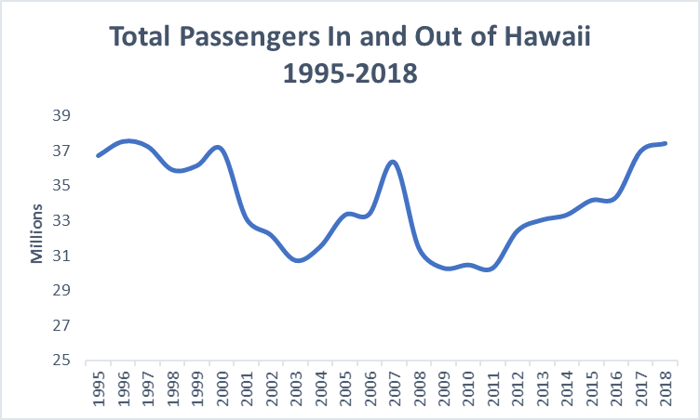 Budget seating has been a popular way for airlines to fill remaining capacity while adding restrictions on passengers, targeting the price-sensitive consumer. The new pricing option has been an effective strategy for almost every U.S. based airline, and Hawaiian Airlines has jumped on board, announcing a main cabin basic fare. This new fare doesn't allow passengers to choose seat locations, forces them to board the plane last with no flyer miles received, and doesn't allow flight-change requests.

The new fare option is expected to bring Hawaiian Airlines' additional annual revenue between $15 million and $25 million for Hawaiian routes -- currently being offered on non-stop routes to Hawaii with plans to expand the budget fare to other routes in the future.

The future of Hawaiian Airlines

Fourth-quarter capacity is expected to increase 3% to 4.5% year over year -- driven by the new route from Maui to Las Vegas, reintroducing the Fukuoka route, the addition of a second daily route from San Francisco to Honolulu, and the new service to Boston -- which started in April of 2019.

In the meantime, investors will need to sit and wait until a verdict is announced from the DOT. A current 6.09 forward price-to-earnings (P/E) ratio in comparison to Southwest's 12.87 P/E ratio leaves Hawaiian undervalued in comparison. However, Southwest operates approximately 4,000 flights daily during the peak season while Hawaiian operates 260 daily flights --- 6.5% of Southwest's overall capacity.

It will be difficult for Hawaiian Airlines to compete against heavy hitters such as Southwest and Alaska, which is why investors need to research alternative airlines until Hawaiian Airlines can prove to be a force on current routes while growing through heightened competition.