Please ensure Javascript is enabled for purposes of website accessibility
Free Article Join Over 1 Million Premium Members And Get More In-Depth Stock Guidance and Research
By Daniel Sparks - Nov 5, 2019 at 10:01AM

Even as revenue fell, shares soared.

On the surface, Apple's ( AAPL 2.50% ) fiscal 2019 results don't look like the type of numbers that would spark optimism from investors. Total revenue during the period, which ended on Sept. 28, was $260 billion, down from $266 billion in fiscal 2018. Furthermore, earnings per share of $11.89 were about flat compared to the prior year. The iPhone was to blame for this performance, as the important segment saw its revenue decline from $165 billion in fiscal 2018 to $142 billion in fiscal 2019.

Yet the tech giant's shares have surged 63% year to date and have recently been hitting new all-time highs.

With Apple's fiscal 2019 behind it, here are four ways the tech giant impressed investors during the year. 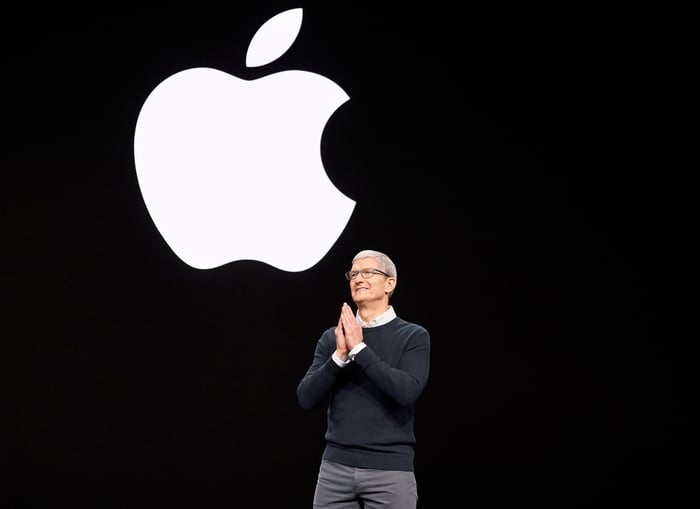 1. A return to growth during the second half of the year

Perhaps one of Apple's most notable recent accomplishments was returning to growth in the second half of fiscal 2019, even as iPhone revenue continued to fall by a double-digit percentage rate.

Apple's ability to grow its overall revenue and earnings per share even as its iPhone segment continues to face headwinds highlights how the tech company is becoming less dependent on the segment.

Apple's services revenue has consistently increased at double-digit year-over-year growth rates for years. But the important segment saw accelerated momentum in Apple's fourth quarter of fiscal 2019. Services revenue increased 18% year over year in fiscal Q4, up from 13% growth in the prior quarter.

With Apple's more consistent and predictable services business playing a bigger role in the company's operating results, the story for the stock is shifting. Apple is no longer viewed as a company almost entirely dependent on iPhone sales.

Apple's "wearables, home, and accessories" segment -- the segment that wearables falls under -- saw revenue rise 41% year over year in fiscal 2019.

Going into fiscal 2020, Apple appears to be on better footing than it was at the beginning of fiscal 2019. The midpoint of Apple's revenue guidance range for the first quarter of fiscal 2020 implies a 4% year-over-year increase, suggesting the tech giant's revenue growth rate will accelerate once again.