Please ensure Javascript is enabled for purposes of website accessibility
Log In Help Join The Motley Fool
Free Article Join Over 1 Million Premium Members And Get More In-Depth Stock Guidance and Research
By Royston Yang - Nov 5, 2019 at 7:00AM

Slowing iPhone sales led to earnings that declined slightly. However, here are three reasons why the company remains attractive.

Apple Inc (AAPL 2.32%) has just reported its full-year 2019 earnings, and at first glance, it appears all is not well. Apple's flagship product, the iPhone, saw sales decline by nearly 14% year-over-year. The iconic product now forms 54.7% of total revenue, down from 62.1% a year ago. While sales of Mac and iPads were up year-over-year, it was insufficient to match the fall in revenue for the iPhone.

However, there's a silver lining to this seemingly dismal set of earnings. Here are three reasons why this tech giant remains attractive. 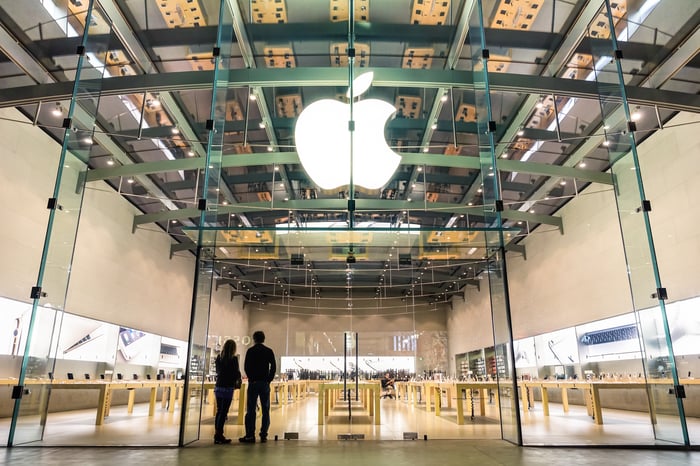 Apple reported a strong 41% year-over-year growth in wearables, home, and accessories. These include items such as the Apple Watch, Airpods and Beats products. This segment now makes up 9.4% of total revenue, up from just 6.5% a year ago. Interestingly, this segment's sales have now surpassed the sales for iPads and is inching very close to the Mac's revenue numbers.

The reason to get excited over wearables is that this segment represents the future of where tech products are headed -- easy-to-use, portable and convenient. IDC has forecast that the market for wearables is on track to hit 222.9 million units this year, and is set to grow by 7.9% annually to hit 302.3 million by 2023. Though Apple does not break down the number of units it sells for its wearables division, the forecast nevertheless bodes well for the division as it signals steady growth in the years ahead.

The Apple Watch is one of Apple's key wearable products, and Tim Cook has reiterated Apple's commitment to focusing on users' fitness and health. WatchOS6 contains new features such as Cycle Tracking and Activity Trends that help users to better track and monitor their fitness levels.

Remember the ECG feature that Apple introduced in Series 4? This feature is now available in 32 markets, including India, and allows users to check and measure their heart rate. This FDA-approved feature is one of the many initiatives Apple is undertaking to monitor its customers' health statistics. If the ECG picks up any abnormalities, users should then consult a doctor for further tests and treatment options.

Apple shows huge potential with its health-focused Apple Watch as the world is waking up to the importance of healthier living. The tech giant's collaborations with leading health institutions as well as a new Research app paired with medical studies into Hearing, Heart and Women's Health paves the way for potential medical discoveries and breakthroughs, further cementing Apple's place in the healthcare industry.

Apple's Services division grew 16.5% year-over-year and now makes up 17.8% of Apple's revenue for FY 2019. According to Tim Cook, CEO of Apple, App Store, Music and Cloud Services hit new all-time records, and the company is well on its way to doubling FY 2016's services revenue by 2020.

For Apple Pay, revenue and transactions more than doubled to over 3 billion transactions in Q4 2019, not only exceeding Paypal Holdings' (PYPL 0.37%) number of transactions but also displaying four times faster growth. Apple Arcade was launched in September, giving subscribers unlimited access to a personalized selection of games from developers around the world. As services revenue tends to be recurring in nature, Apple's plans to grow this division by building an ecosystem of loyal users is a great way to stabilize revenue and earnings and make them less volatile.

The future remains exciting for Apple

Apple is continuously rolling out new services in order to boost its Services revenue, and Apple TV+ is set to be launched in over 100 countries and regions. It is Apple's first all-original video subscription service and will compete against Netflix's original offerings and Amazon Prime Video by Amazon.com.

Though there may be speed bumps along the way for the company, Apple's future remains exciting and I can't wait to see what else this tech giant has to offer.