The data center market has been in a slump this year. That has put pressure on NVIDIA's (NASDAQ:NVDA) revenue, as the data center segment makes up 27% of the chipmaker's business. NVIDIA's total revenue fell 17% year over year last quarter, with data center revenue down 14%.

If Intel's (NASDAQ:INTC) latest quarterly results are any indication, NVIDIA could be ready to turn the corner. Last week, Intel reported its best quarter in history, supported by strong demand in its data-centric group, which includes revenue from server chips. One analyst released a bullish note on NVIDIA stock following Intel's third-quarter earnings, citing an improving environment for data center spending.

Let's review what Intel reported and how that might indicate a turnaround for NVIDIA. 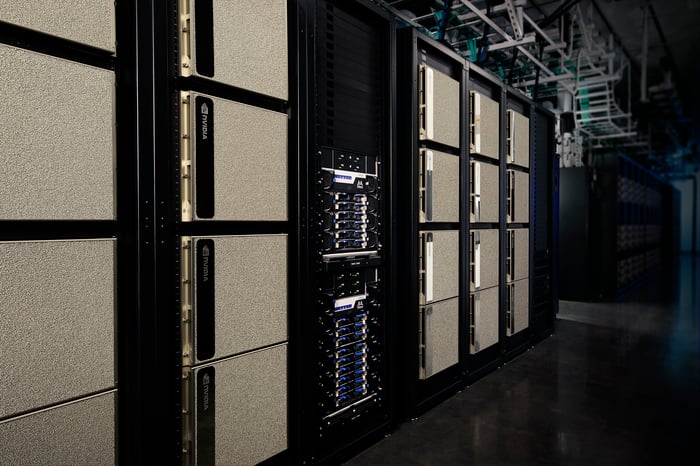 The NVIDIA DGX SuperPOD is one of the fastest computers in the world. Image source: NVIDIA.

A data center recovery is on the horizon

Intel's revenue from its data center group increased by 4% year over year last quarter, which contributed to a record quarter across the chip giant's business. Even more revealing was that data center revenue increased by 28% sequentially over the second quarter, which shows a dramatically improved spending environment from earlier in the year.

What's more, Intel cited a 9% increase in average selling prices, driven by strong adoption of high-performance second-generation Xeon chips. Cloud and communications make up two-thirds of Intel's data center group. Revenue from the cloud increased by 3% year over year. The increase in cloud revenue marked a return to growth after what CEO Bob Swan called a "historic 2018," in which cloud service providers had to hold back on spending to absorb excess capacity.

The evidence from Intel's most recent quarter and NVIDIA's second-quarter report a few months ago suggests the data center market is starting to heat up again, which could bode well for NVIDIA's revenue growth heading into 2020. Through 2018, NVIDIA saw explosive growth in its data center business, which contributed to the stock's dramatic rise over the past five years. The slump this year should prove to be a temporary slowdown in a long-term secular growth market.

What to expect in the next earnings report

Research firm Gartner expects worldwide IT spending in data center systems will be down 3.5% across the industry in 2019. That's down from the robust 15.7% growth in spending in 2018. But next year, the firm forecasts a return to growth in the data center market, although slight, of 2.8% year over year.

If data center spending does improve in the short term, NVIDIA will be ready. It scooped up Mellanox (NASDAQ:MLNX), a leader in interconnect technology for data centers, earlier this year for $6.9 billion. That deal is expected to close by the end of the year. Plus, NVIDIA has continued to roll out new products to serve the growing interest in language learning models, such as the DGX SuperPOD AI supercomputer, which it launched in June at the Annual International Supercomputing Conference as one of the world's fastest supercomputers.

NVIDIA doesn't provide guidance for individual business segments, but its guidance for total revenue hints at improving market conditions in the gaming and data center segments. For the fiscal third quarter, the company expects total revenue to be approximately $2.9 billion. That represents a year-over-year decline of about 9%, but it also shows an improving trend after the 17% decline in revenue in the fiscal second quarter.

More noteworthy is that management is calling for a 160 basis point gross margin improvement year over year to 62%. That would suggest a higher sales mix of high-performance chips, which could reflect higher sales of gaming and data center products.

We'll know more in a few weeks, when NVIDIA reports earnings on Nov. 14.