Sales of gaming and data-center chips have been slow lately, but there are plenty of reasons to like this tech stock for the long haul.

Over the last decade, mobile devices have dramatically changed the way people shop and communicate, but the next 10 years could see even more radical change thanks to advancements in artificial intelligence (AI).

By 2030, the robotaxi market could be worth more than $2 trillion, according to UBS. Also, 70% of white-collar workers will interact with chatbots by 2022, according to Gartner. The technology that robotaxis and chatbots have in common is AI.

NVIDIA (NVDA -2.51%) is fueling the AI revolution. The stock has delivered life-changing returns for investors over the last 20 years, and here are 11 reasons you should consider tucking some shares away in your nest egg. 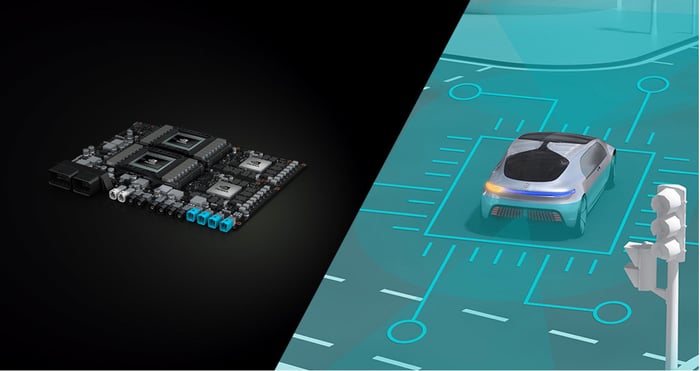 1. A history of outperformance

It's not always a good idea to buy a stock simply because it has done well in the past. But NVIDIA's stock performance over the past few decades tells us it is doing something right.

Since the IPO in 1999, the stock is up nearly 12,000%, with much of the benefit of those compounding gains coming in the last decade. Over the last five years, the stock soared 990%. Investors who put their money in stocks with a long record of outperformance will generally do better than by investing in stocks that have struggled to beat the market.

Those gains ultimately stem from the company's dominance in the market for graphics processors. NVIDIA and its rival Advanced Micro Devices (AMD -3.28%) have been knocking heads for a long time, but NVIDIA has garnered most of the market for graphics cards since 2005. Its gaming segment is its largest, making up 50% of total revenue.

In the last five years, NVIDIA has taken its core competency of developing graphics cards for PC gamers and applied that technology for other uses, such as high-performance computing, AI, and robotics. The results: Revenue has more than doubled, and earnings have more than tripled. 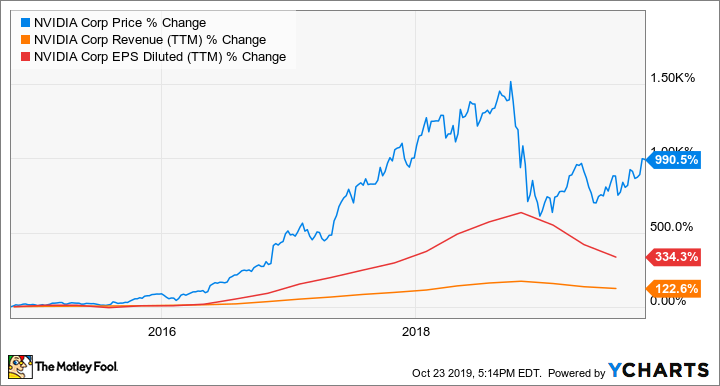 Earnings have grown faster than the top line, because high-end processors generate high margins. The shift of more sales coming from high-value products, especially in the data center segment (27% of revenue), has pushed gross margin up from 48% to 61% over the last eight years.

Those wider margins have the company drowning in cash. Even with the decline in revenue this year due to a slowdown in the gaming and data center markets, it generated $2.4 billion in free cash flow.

Furthermore, the company has a healthy balance sheet, with $6.5 billion of net cash. This gives it a significant financial advantage over AMD, which has a higher ratio of debt to cash.

Consistent profitability means investors get a little something in return. The company paid its first dividend in 2012 at an annual rate of $0.30 per share. Thanks to the growth the company has experienced, the dividend has more than doubled to $0.64 per share.

7. A founder CEO with skin in the game

Founder and CEO Jensen Huang has a deep passion for graphics, which explains the success of the company since its founding in 1993. Most importantly, Huang owns 3.87% of the total shares outstanding, a stake currently worth $4.6 billion. He certainly has his interests aligned with those of long-term investors.

NVIDIA has recently experienced a slowdown in the data center segment, its second largest revenue source. Revenue peaked in the fiscal third quarter of 2019 at $792 million and has fallen to $655 million as of the most recent quarter. The dip was mainly caused by the decrease in spending of a few large customers, but the future looks bright.

Huang continues to see strong underlying demand taking shape. During the fiscal second-quarter conference call, he said, "The broad-based trend of our data center business is upwards, to the right, and it's growing very nicely."

Indeed, market estimates continue to point to rising demand for data centers. The data center market is expected to grow at 17% annually through 2023, according to researcher Technavio. NVIDIA's data center segment may already be starting to turn up again, as the $655 million in revenue last quarter represented the first sequential improvement in three quarters.

NVIDIA took advantage of the slowdown in the data center market to acquire Mellanox (MLNX) in a deal expected to close by the end of 2019. The $6.9 billion acquisition of the Israel-based maker of interconnect technology puts NVIDIA in a great position to capitalize when data center spending picks up again.

Mellanox saw revenue increase 26% in 2018 to reach $1.09 billion. The company turned in a healthy profit of $267 million, which was more than double the year before.

A few years ago, when self-driving cars dominated headlines, NVIDIA was perceived as a leader in the space, one reason investors were so bullish on the stock. But the growth story in its automotive segment has since taken a backseat to the performance of the gaming and data center segments, not to mention it's a very crowded space with juggernauts like Intel's Mobileye and Alphabet's Waymo project vying for position.

NVIDIA's automotive segment generated $710 million in revenue over the last year, representing an increase of 22%.

Chip stocks are notoriously volatile. This is a natural result of the underlying cyclicality of the semiconductor industry. But as NVIDIA's past performance demonstrates, the graphics maker has a lot to offer investors looking to spice up their returns.

A good indicator that you have found a long-term winner is when a company seems to have an expanding set of growth opportunities. NVIDIA started out as a graphics specialist for PC gamers. But as the engineers pushed the envelope of rendering computer-simulated worlds, the company found other applications in AI and robotics that could benefit from the advanced power of a graphics processing unit (GPU).

What's happening with NVIDIA right now is like the explosive demand Intel experienced in the 1990s during the adoption of the PC. The power of the GPU is literally changing the world, putting NVIDIA in a perfect position to continue delivering attractive returns for investors.