The chipmaker's automotive business has taken off remarkably after a change of strategy.

NVIDIA (NVDA -6.95%) stock regained its mojo after the company's second-quarter earnings report wowed Wall Street on Aug. 15. The graphics specialist made all the right noises with respect to its gaming business, which remains its primary source of revenue.

But the biggest surprise came from the company's automotive business, which was one of the few bright spots in a quarter when overall revenue and earnings plunged. NVIDIA's automotive revenue shot up 30% year over year to $209 million, accounting for just over 8% of the company's nearly $2.6 billion total.

Now, that might not be a huge percentage, but investors shouldn't discount the potential of the company's automotive business, because NVIDIA has found a formula to succeed in this fast-growing niche. 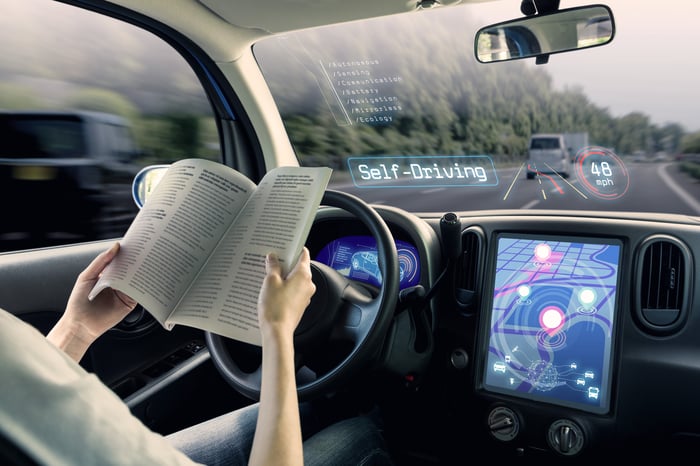 A strategic shift in autonomous vehicle tech is paying off

NVIDIA's automotive business seemed to be losing traction last year. Despite the initial hype over its numerous autonomous vehicle partnerships, those deals had failed to translate into revenue. In response, the company rethought its strategy, shifting from the commoditized business of supplying the chips for self-driving systems to designing and selling end-to-end systems that integrate both hardware and software.

As a part of this strategy, NVIDIA unveiled the DRIVE AutoPilot platform in January, calling it the world's first commercially available Level 2+ autonomous driving platform. Management claimed at the time that it would enable automakers and component suppliers to build Level 2+ autonomous vehicles, and deploy them in real-world conditions as early as 2020.

Automotive component suppliers Continental and ZF wasted no time in tapping this platform to build autonomous driving solutions, and the list of partners has been growing ever since.

In the second quarter, Volvo selected the DRIVE platform to "train networks in the data center, test them in simulation, and deploy them in self-driving vehicles." The Swedish automaker plans to use autonomous driving technology across a wide range of applications including public transport, mining, construction, and freight transport.

Rising demand for NVIDIA's artificial-intelligence-enabled cockpit solutions was another catalyst for automotive revenue growth last quarter. Shareholders will appreciate the forecast from TechNavio  that the digital cockpit market will clock an annual growth rate of 24% through 2022. Meanwhile, the deployment of artificial intelligence (AI) solutions in the automotive space is expected to grow at 45% a year through 2025, according to third-party research.

NVIDIA has figured out the right strings to pull to tap into the massive opportunity in the autonomous vehicle market and its partnerships are now delivering actual revenue growth.

Automotive might not be a really big business for the chipmaker yet, but NVIDIA believes that it can pull in huge revenue from this segment in the future, as there could be a $30 billion addressable market opportunity in automotive by 2025.

The company continues to strike partnerships left, right, and center, ensuring that a large number of companies will develop autonomous solutions using the DRIVE platform. NVIDIA says more than 370 companies are using its autonomous vehicle platform, including some big names such as Toyota and Mercedes-Benz.

So don't be surprised to see NVIDIA's automotive business accelerate, driving stronger top-line growth and ensuring that it remains one of the top tech stocks.