After a rough year, the once high-flying maker of graphics cards gave investors reasons for optimism.

It's been a tough year for NVIDIA (NVDA 3.89%). Shares are down 44% since October, and adjusted earnings slid 36% year-over-year in the second quarter, which beat Wall Street expectations.

Despite those dismal numbers, there are signs the maker of graphics processing units (GPUs) may be turning around. The one-time Wall Street highflier, whose stock surged more than 900% from the beginning of 2016 to October 2018, is putting the disastrous effects of the cryptocurrency crash behind it. 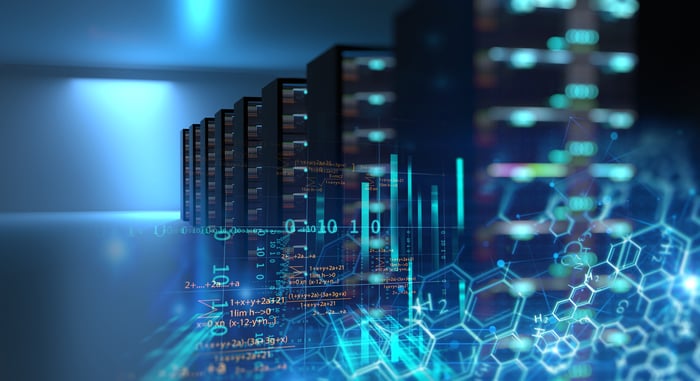 In its most recent earnings, NVIDIA showed sequential growth in all five revenue segments; strength in gaming was fueled by ray tracing technology and notebook sales; and data centers returned to sequential growth for the first time in nine months. Let's take a closer look.

When the cryptocurrency market was booming, so was NVIDIA's growth. As crypto prices soared, and interest in crypto mining grew, demand surged as do-it-yourself miners rushed out to buy GPUs, including NVIDIA's, to build their own mining rigs, but when crypto values collapsed, so did demand for graphics cards.

Misjudging the market, management had produced GPUs to meet demand that had vanished. As inventory swelled in sales channels, NVIDIA slashed prices and delayed shipments. Revenues and profits plummeted, but management tried to reassure investors it was only a short-term problem. Was it?

Fast forward nine months to Aug. 15, when NVIDIA released second-quarter earnings. Although the numbers were expectedly bad on a year-over-year basis -- revenue down 17% and adjusted earnings down 36% -- they were better than analysts forecasts. Adjusted EPS was $1.24, which was $0.10 above Wall Street expectations. Total revenue was $2.6 billion, a 16% improvement over the previous quarter's $2.2 billion.

The company showed sequential growth in all five of its revenue segments, reassuring investors that the crypto issues were subsiding. Its stock rose 7% the next day on the news.

Last year, NVIDIA announced its RTX series of graphics cards. The GPUs use a technology known as ray tracing, which enhances a gamer's experience by making images more vibrant through enhanced rendering of shadows, lighting and reflections. But there was an issue: Not many video games utilized the technology. That's beginning to change.

In the August conference call, Chief Financial Officer Colette Kress said high-profile games, including Call of Duty: Modern Warfare, Cyberpunk 2077, Watch Dogs: Legion, and Wolfenstein: Youngblood, would be ray tracing enabled. Less than a week later, Microsoft and NVIDIA jointly announced that Minecraft -- one of the most popular games of all time -- would soon support ray tracing.

This July, NVIDIA launched its latest ray-tracing product line, the GeForce RTX Super. With the increased number of ray tracing enabled games coming onto the market, NVIDIA could have an advantage over competitors, which don't currently offer ray tracing chips.

"NVIDIA GeForce RTX are the only graphics cards in the market with hardware support for ray tracing," Kress said. "They deliver a two-times to three-times performance speed up over GPUs without a dedicated ray tracing core." 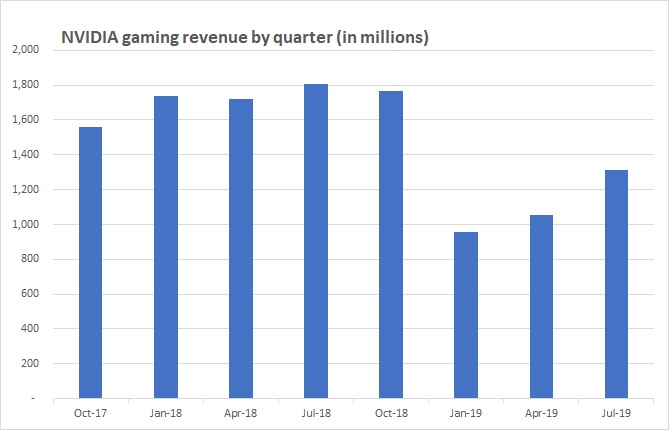 That's the kind of difference-making performance that attracts gamers, which in turn, encourages desktop and laptop manufacturers to use NVIDIA's cards. In a recent CNET ranking of 2019's top gaming laptops, machines with NVIDIA's RTX graphics cards dominated the top of the list.

"Notebook gaming is one of the fastest-growing segments of the gaming platform world," Chief Executive Officer Jensen Huang said, suggesting that there's growth potential because the "number of notebooks that are able to game is only a few percent" right now.

Huang said notebook sales "have grown significantly" year-over-year, and he expected that growth to continue into next year.

With gaming typically producing more than half of NVIDIA's revenue, the improved second-quarter numbers were an encouraging sign for shareholders.

Data centers account for about 25% of NVIDIA's total revenue, but signs last year of slowing growth were a concern even before the cryptocurrency bust.

Although the most recent quarter's data center revenue ($655 million) was down 14% year-over-year, there was a positive. It increased sequentially, albeit a tepid 3.3%. 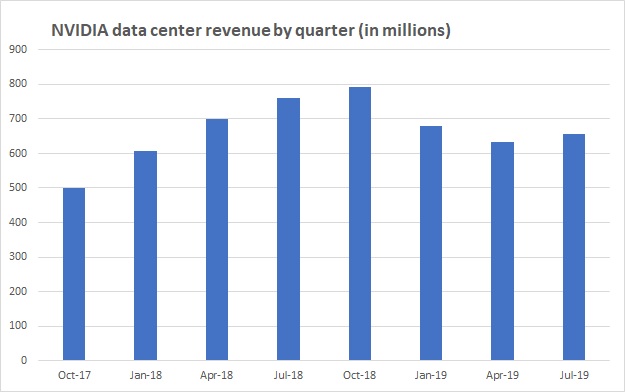 NVIDIA's goal is to tap into the enormous emerging markets of artificial intelligence. Data centers are connected computer servers, and those servers can number in the thousands for some companies, storing and processing massive amounts of information. NVIDIA's GPUs provide servers the power needed to speed up those processes, including artificial intelligence.

Huang said the company is well positioned in what is likely the most important application -- conversational AI, the use of messaging apps, chatbots, or voice assistants to simulate real conversations. (In a 2018 report, Juniper Research estimated that 8 billion digital voice assistants would be in use by 2023, more than tripling the number estimated by the digital technology consultant for the end of 2018.)

Huang said the company was seeing growth among industries adopting AI to improve efficiency, "whether it's a delivery robot or some kind of a chatbot or the ability to detect fraud in financial services."

Investors are banking on NVIDIA's data center growth, and the second quarter provides at least cautious optimism that may be happening.

NVIDIA's growth opportunities are undeniable, even in light of possible short-term headwinds. A trade war with China, where NVIDIA does business, has stoked fears of a recession. That's important to consider, but it's also important to remember those are short-term concerns.

Longer term, there will be growing demand to power computing for artificial intelligence, self-driving vehicles and analysis of big data. NVIDIA can capitalize on that. After a quarter that showed signs of returning growth, it could be time for long-term investors to take a closer look.