Please ensure Javascript is enabled for purposes of website accessibility
Free Article Join Over 1 Million Premium Members And Get More In-Depth Stock Guidance and Research
By Billy Duberstein - Nov 5, 2019 at 7:19AM

The data storage giant plunged 17% after reporting earnings. Is the selloff an opportunity, or a danger sign?

Even among risk-taking technology investors, memory and storage stocks aren't for the faint of heart. Memory and storage producers are "price-takers," meaning that they don't have control over the price at which they sell their products, which is determined by supply and demand. Suppliers must also produce output in a relative "straight line" in tune with what they believe to be long-term demand. Yet as we saw last year, demand can fluctuate wildly in the near-term, especially with the onset of the U.S.-China trade war.

Western Digital ( WDC -1.21% ), which makes both hard disk drives and NAND flash storage chips, has felt these effects in a big way, with big-time declines in its NAND flash segment over the past year. NAND prices are down roughly 80% over the past two years, which led to significant declines in Western Digital's revenue, causing adjusted (non-GAAP) profits to plummet to near-breakeven levels.

However, the storage industry is currently thought to be past the bottom of the cycle, and expectations were high for Western Digital's forward guidance to show a recovery when it released its earnings report on Oct. 30. Yet management only guided for adjusted earnings of $0.45 to $0.65 in the coming quarter, versus analyst expectations of $0.75. 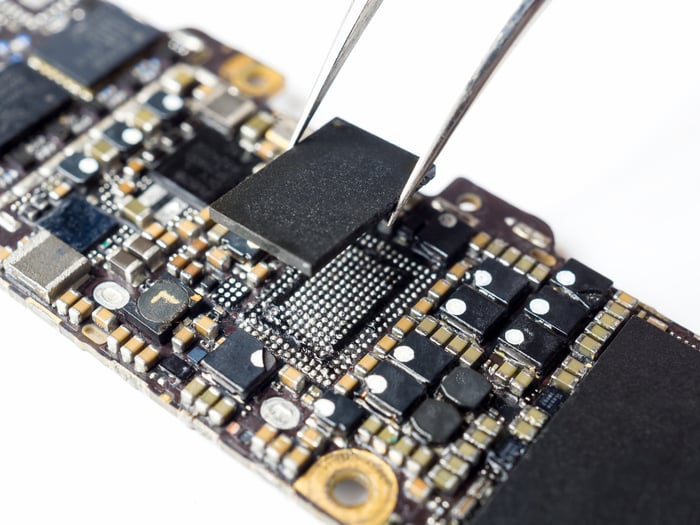 At first glance, that could mean that the recovery isn't as robust as many thought. Given that Western Digital's stock had already surged over 70% since the start of the year on hopes of a recovery, the stock sold off hard after the release. CEO Steve Milligan also announced his upcoming retirement, which added to the uncertainty.

Western Digital did paint a more optimistic picture of the current quarter in terms of revenue, projecting $4.1 billion to $4.3 billion in sales, up from $4.0 billion last quarter. Milligan also reiterated his statement from last quarter that flash has passed its cyclical trough. In addition, he added:

... in general, our bit consumption demand has been at or well above what we thought. ... By the end of the year the industry inventories would be substantially improved and we stand by that. ... I think we've seen generally speaking, a little bit better mix in terms of capacity per unit. And I think some of the end markets are a little more robust than maybe we originally expected, including mobile.

So if demand is snapping back from the early year swoon, why aren't Western Digital's earnings and margins snapping back? There appear to be two company-specific reasons for that.

First, Western Digital noted that mobile NAND carries lower margins than other NAND segments such as high capacity enterprise, to the point where Western Digital actually stopped shipping flash chips to the mobile market last quarter. However, the December quarter is a big mobile quarter, which will lead to more revenue, but lower margins.

Secondly, Western Digital is in the process of ramping its new K1 fab, which is part of its joint venture with Toshiba Memory Corp. The new facility will produce the companies' latest-generation 96-layer NAND chips, but will incur some higher start-up costs until production fully ramps up and utilization grows toward 100%. That won't occur until 2020, however, so the ramp-up of the new facility will bring added costs next quarter.

Milligan also said that investors may not realize the full benefit of the up-cycle until the back half of 2020. These one-time factors will cloud the fourth quarter, and the seasonally weaker first quarter could mean muted EPS for Western Digital through the first half of next year. It therefore isn't a surprise that impatient investors chose to sell now, since the recovery in Western Digital's earnings may be delayed for longer than anticipated.

However, for patient investors that believe in the long-term memory recovery, last week's sell-off could spell an opportunity. In its fiscal 2018, at the height of the up-cycle, Western Digital earned non-GAAP earnings per share of $14.73. Even in fiscal 2019 (which ended in June), as prices for hard disks and NAND flash plunged, the company made non-GAAP EPS of $4.84. That compares with a stock price of around $54 as of Monday morning.

Do you feel lucky?

To reiterate, Western Digital's stock is definitely not for the faint of heart and is highly sensitive to the macroeconomic picture, which is cloudy right now. However, since data-hungry artificial intelligence applications are in their early innings of implementation, storage is sure to remain in demand over the long-term. For those willing to endure some bumps along the way, the current pullback could wind up being a good entry point for long-term investors, if they are looking forward a few years -- not a few quarters.