Please ensure Javascript is enabled for purposes of website accessibility
Free Article Join Over 1 Million Premium Members And Get More In-Depth Stock Guidance and Research
By Ian Agar - Nov 6, 2019 at 11:07AM

This company went public in 2018 and has a comfortable cash stash.

If you've ever used Tinder, Wikipedia, or a number of other popular platforms to search for something, then you've also used software developed by a little-known company called Elastic ( ESTC -1.88% ).

Founded in 2012 in Amsterdam, the company's chief product is the ELK Stack, a suite of enterprise software products designed to search through data and return meaningful results (such as your next Tinder prospect). Other Elastic products, such as its security analytics offerings, are used by the U.S. Navy and the U.S. Department of Homeland Security, among other clients. Pretty impressive, right?

Yet, despite a roster of big-name clients, the company's widespread adoption hasn't translated into profits for 7-year-old Elastic. So what will be the golden ticket to finally printing black ink? The answer could be revealing itself as it builds the foundation for its long-term strategy.

In the quarter that ended in July (the first quarter of its 2020 fiscal year), Elastic recorded $89.7 million in revenue, representing a 58% year-over-year boost when factoring in foreign currency fluctuations. Its GAAP net loss was $0.56 per share, with an operating loss of $42.3 million. 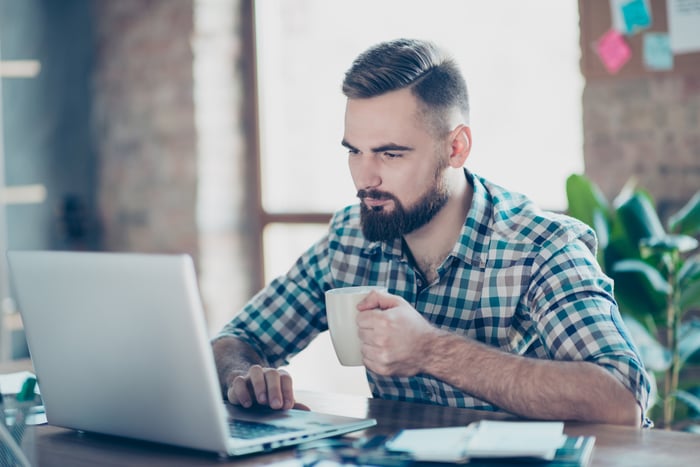 This loss is pretty normal for a company of its size and type. During the first quarter, $52 million, or almost half the company's operating expenses, was spent on sales and marketing. This large proportion is common with rapidly growing companies offering software in a subscription format, known as software-as-a-service, or SaaS. For comparison, in its most recent respective earnings reports, Adobe's sales and marketing expenses accounted for almost 52% of its total operating expenses, while Zoom Video Communications dedicated 69%.

Elastic's marketing efforts seem to be paying off as the company enjoyed a nearly 62% boost in paying subscribers to over 8,800 as of July 31, up from over 5,500 a year prior.

Further, after raising $252 million in its 2018 initial public offering (IPO), the company has been able to keep almost all of that, leading to a $315.2 million mountain of cash and cash equivalents as of July 31. This is a perfect stash to have as Elastic is eager to take advantage of potentially expensive growth opportunities that might not show returns for a while, such as its continued streak of buyouts.

In June, the Dutch company scored an agreement to acquire endpoint security company Endgame for $234 million in primarily stock and outstanding equity awards. This is the latest addition to the numerous other companies Elastic has gobbled up since 2015, namely analytics and search companies Lambda Lab Corp., Swiftype, Opbeat, Prelert, and Found.

Elastic's Endgame purchase helps hedge against a key vulnerability: its dependence on its free, open-source search engine software known as Elasticsearch. This is the software that largely powers Tinder searches, for example.

Since the project is open-source, Amazon, has created its own competing premium products. Although Elastic founder and CEO Shay Banon denied any material impact from Amazon during a June earnings conference call, it's still possible for competitors to easily create identical products using the same foundational software. Endgame stands to provide a proprietary value-add to help hedge against this possibility.

Given the company's track record of acquisitions, having a large cash balance on hand ensures it can keep wheeling and dealing as buyout opportunities arise.

The potential for more

Banon has left the door open to continuing that acquisition streak. "When it comes to our potential acquisitions, we're very excited about going after the endpoint market..." he said in an August conference call with anlaysts.

But the company isn't necessarily looking for immediate returns. For example, Endgame only produced $20 million in revenue from client subscriptions in the year leading up to its acquisition. Not a whole lot, but Elastic has deeper, longer-term plans for Endgame. "Our primary investment thesis is to integrate their product into the Elastic stack and apply our go-to-market model to it," CFO Janesh Moorjani said in June. "Therefore, the revenue opportunity for us is longer term in nature."

If Elastic is to fully see the fruits of its labor, having enough cash to keep chugging along without issuing new stock is essential. Having maintained over $300 million in cash while growing rapidly is a testament to the company's abilities to fully realize the growth initiatives it's pursuing without going broke.

Why Elastic Shares Gained 16% in October

Why Shares of Elastic Were Up 10.7% This Week