In mid-October, President Donald Trump announced what he called a "very substantial phase one deal" in a possible U.S.-China trade accord that saw the continued delay of a proposed hike in U.S. tariffs.

The final details are still being worked out, but this initial agreement, which covers areas including intellectual property protections, financial services, foreign exchange markets, and agriculture, led to hope that the long-simmering trade war might soon be eventually resolved.

If a more comprehensive trade agreement is reached, certain sectors could see a big boost.

Trade tensions with China have simmered for decades. In 1980, China was granted provisional Most Favored Nation (MFS) status by the United States, which gave it access to U.S. markets with low tariffs. However, this status triggered congressional opposition due to evidence of China's intellectual property theft, human rights abuses, and currency manipulations. 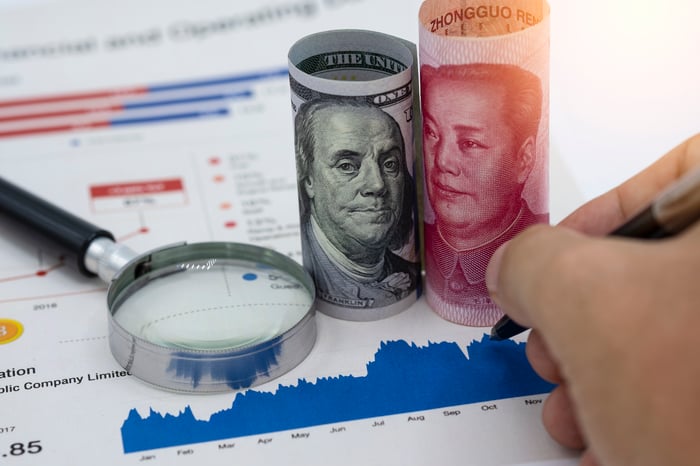 However, in 2000, Congress made China's trading status permanent, paving the way for the Communist nation to join the World Trade Organization (WTO). The granting of permanent trading relations with China contributed to the capitalist boom in China that has continued to this day. Foreign investment poured in. Yet throughout the 2000s, both the European Union and the United States accused China of unfair business practices even as foreign companies flocked there to take advantage of China's low labor costs.

The U.S.-China trade deficit on goods soared from just $10.4 billion in 1990 to $419 billion by 2018. (With services, the U.S. actually actually posts a trade surplus, meaning the U.S. sells more services to China than the other way around.)

But with the election of the protectionist Donald Trump in 2016, the U.S. adopted a more aggressive stance toward trade with China, eventually igniting a trade war that has seen tariffs rise substantially on both sides.

Sectors that will benefit from a resolution

In the wake of the recent news, market watchers have pointed to a number of sectors that could benefit greatly from the easing of tensions between the U.S. and one of its largest trading partners.

Germany's Center for Automotive Research (CAR) estimates the tariff war and other matters will cost the global car industry an estimated $770 billion over the next five years in lost sales.

The organization says many of the losses will be borne by China's automobile industry as some estimated light-vehicle sales in China could fall by up to 9% this year. In August, Ford announced its decision not to sell a Chinese-made car in the U.S. as a result of the tariffs.

The car companies that stand to gain the most from a reduction in tariffs are Germany's BMW, which exported 65,000 cars from the U.S. to China in 2018; Daimler AG, which exported 57,000; and Tesla, which last year announced its desire to build 500,000 vehicles in China.

U.S. tech companies desperately want access to China's burgeoning markets, and a trade deal that protects U.S. intellectual property while also smoothing access to China's markets would be an enormous boost to some firms, but we won't know until everything is settled what a deal includes.

According to an analysis by Goldman Sachs that CNBC printed last December, data from 2017 showed that the tech companies with the largest percentage of their overall revenue coming from sales to China were Skyworks Solutions at 85%, Qorvo at 75%, Qualcomm at 69%, Nvidia at 56%, and Micron Technology at 55% .

U.S. farmers exported $9.3 billion worth of agricultural products to China in 2018, making China the fourth-largest customer for U.S. farmers (behind Canada, Mexico and Japan). Yet China's retaliatory tariffs on U.S. agriculture products have helped lead to imports dropping by an estimated 50% in 2018, according to John Newton, chief economist at the American Farm Bureau Federation. For some products, such as soybeans, the drop has been closer to 80%.

A new U.S.-China trade deal that did away with or even reduced Chinese tariffs could buoy some U.S. agriculture companies. For example, Tyson Foods could benefit from China's enormous appetite for pork products in the wake of a recent swine flu epidemic; and equipment manufacturer Caterpillar would likely see increased exports. After the U.S. and Canada, China is Caterpillar's third biggest customer, accounting for 5.1% of its overall revenue.