The Trade Desk (NASDAQ:TTD) has been one of the standout growth stories of 2019, up more than 72% so far this year. What makes that even more impressive is that it's on top of more than 150% growth last year. The digital advertising provider uses sophisticated algorithms to automate the ad buying process in real time and ensuring the ads get in front of consumers most likely to benefit from them.

The company's platform has been so successful, it's been stealing market share from its larger rivals, helping fuel its own rapid growth.

The Trade Desk is scheduled to report the financial results for its third quarter after the market closes on Thursday, Nov. 7. Let's look at three areas investors will be watching closely when the company reports earnings. 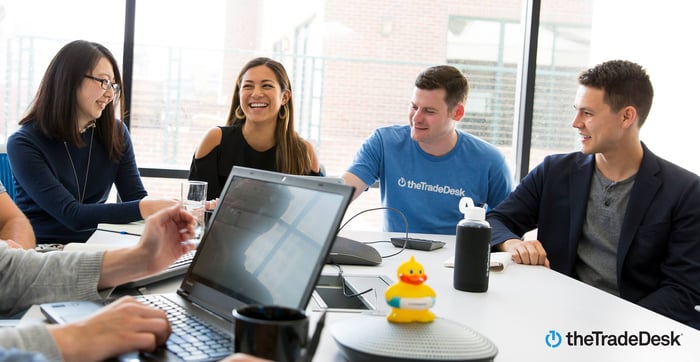 One of the keys to The Trade Desk's spectacular stock performance is the company's significant revenue gains. In the second quarter, The Trade Desk reported revenue of $160 million, up 42% year over year, accelerating from 41% growth in the first quarter. Several of the underlying drivers were even more impressive. Revenue from connected TV advertising increased 250% year over year, while audio ads ramped up 270%.

The Trade Desk raised its guidance and is now expecting revenue of $163 million for the fourth quarter, which would represent a 37% increase over the prior-year quarter. It would also result in 37% year-over-year revenue growth for the full year. Analysts are sold on management's forecast, with consensus estimates calling for revenue of $163.85 million.

The Trade Desk is one of a rare breed of high-growth stocks where the company is actually profitable. In the second quarter, The Trade Desk delivered adjusted EBITDA of $58 million, up 57% year over year, resulting in adjusted earnings per share (EPS) of $0.95, up 58%. The company's margin is expanding as well, with adjusted EBITDA margin reaching 36% in the second quarter, up from 33% in the year-ago period.

Management is expecting its profit to continue. The Trade Desk is forecasting adjusted EBITDA of $45 million, a 23% year-over-year increase. Analysts' consensus forecasts are calling for adjusted EPS of $0.67, edging 3% higher from the $0.65 in produced in the year-ago quarter.

One of the hallmarks of The Trade Desk's success is that the company hasn't had to choose between growth and profit. The Trade Desk has been investing heavily in its future growth, which is likely to continue. Investors need look no further than the company's spending to understand its priorities. Spending on sales and marketing grew 50% year over year, while technology and development expenses grew 51%. Both outstripped revenue growth, which illustrates that the company is investing now to ensure its revenue growth continues well into the future.

Another area of investment is the company's ad platform, as spending increased 33% year over year. On the Q2 conference call, CFO Paul Ross said, "We continued to invest aggressively in areas critical to our future growth."

Investors will be watching closely to ensure that The Trade Desk continues to straddle the line between growth and profits, while not letting expenses grow too quickly.