Choice Hotels International (NYSE:CHH) managed to improve its top line in the third quarter despite revenue per room that fell short of management's guidance. The consumer discretionary hospitality enterprise also reported credible progress in the property refresh of its largest brand, Comfort, and sweetened its 2019 forecast alongside earnings. Below, let's unwrap results from the third-quarter report that was released on Tuesday, keeping in mind that all comparative numbers refer to those of the prior-year quarter. 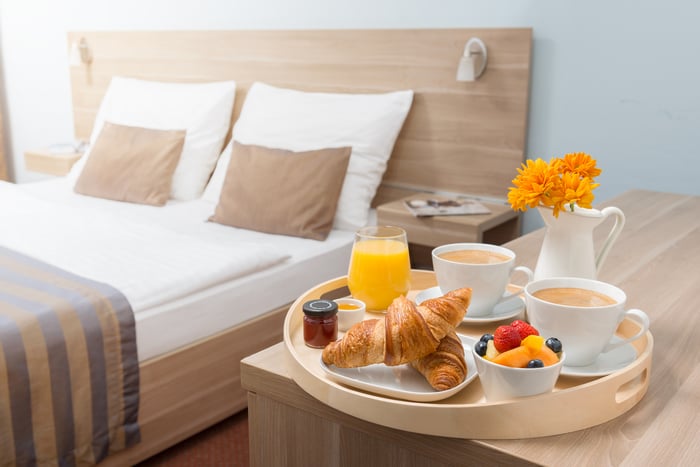 In the third quarter, we drove a 20% year-over-year increase in Cambria's room count by expanding the brand in major business hubs nationwide. [For] the full year 2019, the brand is expected to break its record with the opening of a dozen Cambria hotels, which together represent nearly 1,900 upscale rooms. Through today, nine of these hotels have already opened in high-value markets such as Boston, Houston, Dallas, and Milwaukee. I'm also pleased to share that we expect Cambria will welcome the 50th hotel to its system just before Thanksgiving...

Year-to-date we have opened nearly 60 Ascend hotels and surpassed 300 hotels in the brand's global system. This means Ascend remains the industry's largest soft brand [i.e. an affiliate brand of a major hospitality chain that keeps its own unique identity]. Ascend's global development pipeline is now over 100 hotels strong, which means we can expect it to fuel our upscale rooms growth well into the future.

A tweak to the full-year outlook

Despite flattish RevPAR growth, Choice Hotels increased 2019 earnings guidance with one quarter remaining in the year, due to its expected pace of room openings and new revenue from the four Cambria properties acquired in the third quarter.

The company now expects the year's top line to land between $209 million and $213 million, against last quarter's forecast of $200 million to $206 million.