Shares of NuVasive (NUVA -2.54%) added 11.3% in October, according to data provided by S&P Global Market Intelligence, after the spine technology company reported strong third-quarter results and increased its 2019 guidance.

Revenue increased 7.2% year over year, led by a 9.5% jump in sales of spinal hardware in the U.S. And that's factoring in a currency headwind. On a constant-currency basis, revenue would have been up 7.5%.

Sales of the XLIF and ALA hardware were boosted by Nuvasive's X360 lateral single-position procedure. The company noted that it had trained 20% more surgeons to do the procedure so far this year than it did in 2018.

Biologics revenue decreased 1% year over year, but management thinks the product group will return to growth in the fourth quarter. On the bottom line, adjusted earnings per share at the healthcare company came in at $0.59, up from $0.56 in the year-ago quarter. 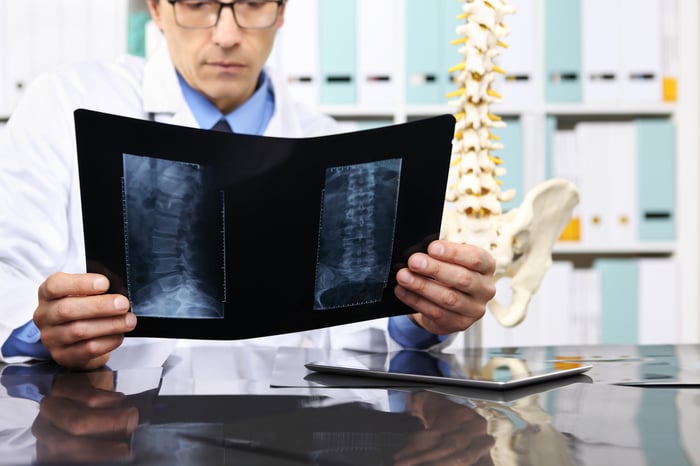 Previous guidance had revenue falling in the range of $1.14 billion to $1.16 billion, but with three quarters in the books, management is confident that revenue will be around the upper end of the range, including a currency headwind of $6 million. On an adjusted basis, management is looking for earnings per share in the range of $2.35 to $2.40, up from prior guidance of $2.25 to $2.35 and solidly ahead of the $2.23 per share NuVasive earned on an adjusted basis in 2018.

Looking a little further down the line, management said it's had interest from surgeons in the company's new Pulse expandable platform on which doctors can use multiple spine surgery technologies. While NuVasive has already taken orders for Pulse, it's still in beta testing, so the company isn't going to ship and install the machines until next year.

Those Pulse platforms should increase capital equipment sales next year, but more importantly, they should drive procedure growth using NuVasive's hardware for years to come.