Investors like Vertex Pharmaceuticals (NASDAQ:VRTX) for its cystic fibrosis products and hefty pipeline. The company has four products on the market for the disease and three additional treatments in Phase II. The strength of its products has translated into earnings, with positive surprises over at least the past four quarters and product revenue of $950 million in the third quarter. That's a 21% increase over the same period a year ago.

But there's another reason to like this Boston-based biotech stock. Vertex is developing non-opioid painkillers, and considering the current opioid crisis, the move into the pain management market is likely to be huge.

Cost of the opioid crisis

In 2017, more than 47,000 Americans died after an opioid overdose, and currently, about 130 people a day die in the U.S. from opioid overdose, according to the National Institute on Drug Abuse. The figure includes prescription medications as well as illicit drugs like heroin. And 80% of heroin users initially misused prescription opioids, the institute reported.

The crisis took root in the 1990s when doctors increased opioid prescriptions with the belief that they wouldn't lead to addiction. That belief was based on the drug companies marketing the drugs as non-addictive. These days, makers of opioids have found themselves facing massive lawsuits, and an expert told CBS that a global settlement over the crisis could cost drugmakers as much as $150 billion. Another estimate pegs the amount closer to $50 billion, based on a recent settlement in Ohio. 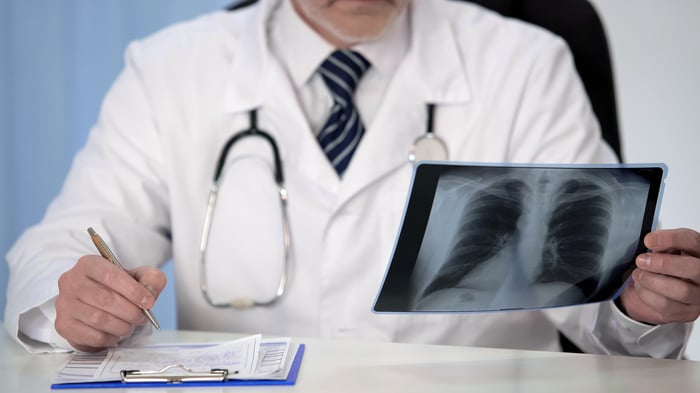 Now that the addictive nature of opioids has become common knowledge, doctors and patients alike are eager to find alternatives for pain management. At the moment, choices are limited to the dangerous opioids or the everyday pain relievers like aspirin or ibuprofen that aren't strong enough to handle severe pain.

Enter Vertex, with molecules that suppress pain by inhibiting a sodium ion channel -- so no need for opioids. Opioids work by binding to receptors in the brain and elsewhere in the body, then blocking pain messages, and therefore, reducing pain. Vertex's work focuses on targeting a gene linked to pain perception and blocking that function. According to an article in The Scientist, the sodium ion channel's presence in peripheral neurons means drugs targeting it stay away from the central nervous system. And as a result, addiction risk is avoided.

The Boston Globe said Vertex sees pain management as a multibillion-dollar opportunity and expects its most promising pain candidates to enter late-stage clinical trials in 2021. It typically takes a company about five years to bring a drug from the beginning of Phase III trials to drug approval.

Vertex has reported positive Phase II results for its most advanced pain molecule, VX-150  in neuropathic pain, osteoarthritis, and acute pain. The company advanced a second similar molecule, VX-961, into Phase I trials, and once it establishes which molecule is the strongest, it will take that one into late-stage development. Vertex last month said last month that the U.S. Food and Drug Administration granted the Fast Track Designation to VX-961, a status that could speed up its time to market.

"We think having a molecule, like 150 or 961, that would have opioid-like efficacy without any of the indicative potential or side effects would be a very powerful transformative advance in the treatment of acute pain," said Chief Executive Officer Jeffrey Leiden in August on the company's second-quarter earnings call.

Of course, Vertex isn't the only company developing non-opioid pain medicines. Eli Lilly (NYSE:LLY) and Pfizer's (NYSE:PFE) tanezumab, in Phase III trials, is closer to market, though clinical trial results were mixed in a report earlier this year. Even as competition races to the pain finish line and some may make it there before Vertex, the market's size and the current lack of non-addictive options mean it still represents an important opportunity. There is room for more than one winner. Analysts predict the global pain management market, which includes devices as well as medicines, will reach $52 billion by 2022, up from $36.1 billion in 2017, according to a BCC Research report.

Now is the time for investors to buy Vertex shares because they can bet on the company's future in the pain management market, while benefiting from the current cystic fibrosis revenue stream. Vertex expects full-year 2019 product revenue of $3.70 billion to $3.75 billion, and analysts surveyed by Yahoo Finance predict full-year earnings per share of $4.77, up 17% from the previous year. For shares trading at 24 times earnings, it's not a bad deal.