A little more than two years ago, Delta Air Lines (NYSE:DAL) broke ground on a new $4 billion, 37-gate terminal at New York's LaGuardia Airport. Typically, airport construction projects are paid for by local airport authorities, with the costs eventually passed on to airlines and their customers in the form of higher landing fees, rental fees, and other charges. However, in this case, Delta agreed to shoulder most of the burden, putting $3.4 billion toward its new LaGuardia terminal.

Last week, Delta Air Lines celebrated the opening of the first of four concourses that will be built as part of this project. As the rest of the project comes on line over the next several years, Delta will be able to provide a better customer experience at LaGuardia while improving operational flexibility. But will the end result justify the high price tag?

Why Delta is investing heavily in New York

In recent years, Delta Air Lines has been the largest airline at LaGuardia Airport, with more than 275 peak-day departures. Its operations have been spread across two terminals: Terminal C and Terminal D. It has occupied the latter for decades, while it expanded into the former following a 2012 slot swap that enabled it to pick up more than 100 additional LaGuardia slot pairs from US Airways.

The new terminal it is building at LaGuardia Airport will replace both Terminal C and Terminal D, creating a more unified airport experience for customers. It will also feature more concessions space -- including upgraded dining options -- an expanded Delta Sky Club lounge with an outdoor deck, and larger gate areas with more seating. 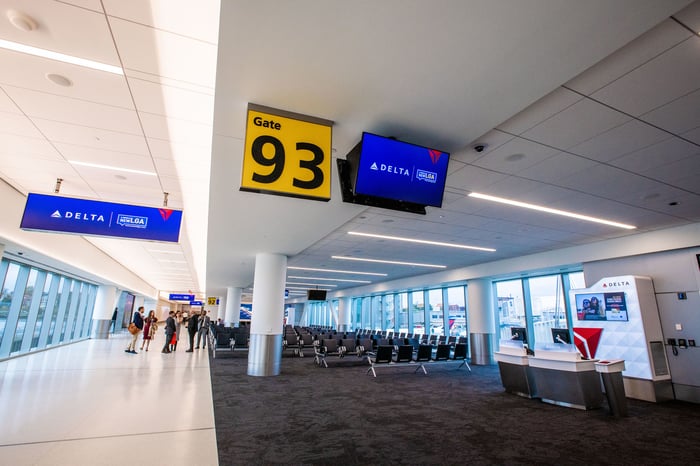 The upgrade will also drive significant operational benefits for Delta. The new terminal will feature dual taxiways that will reduce delays by minimizing taxi times. Additionally, the new gates will be able to accommodate a wider range of aircraft sizes, enabling Delta to use more mainline jets at LaGuardia.

While these benefits are substantial, $3.4 billion is a lot of money to shell out on a single airport project. That's particularly true in this case, because slot constraints and perimeter restrictions mean that flights to and from LaGuardia Airport account for roughly 4% of Delta's capacity as measured by available seat miles (ASMs). In fact, last year, Delta offered more than three times as many ASMs in Atlanta -- its largest hub -- than all airlines combined offered at LaGuardia.

When measured by the number of passengers carried, LaGuardia Airport looks slightly more important, but it still pales in comparison to Delta's larger hubs. Any way you slice it, LaGuardia represents a small piece of Delta's business.

Furthermore, Delta's LaGuardia Airport terminal investments won't generate as much bang for the buck as the parallel project that is building a new Terminal B for most of the other airlines that serve LaGuardia. That's simply because Delta's facilities were never that bad. Terminal C and Terminal D are the airport's two newest terminals, having opened in 1992 and 1983, respectively. They aren't state of the art, but they aren't especially outdated, either. By contrast, the old Terminal B that is being replaced opened way back in 1964 and was built in the era before security checkpoints, meaning that most of the dining, retail, and other facilities were located outside of security.

The halo effect may be the difference-maker

There are certainly direct financial advantages for Delta related to this terminal project. Since the airline will own the terminal and is just leasing the ground it is built upon, it won't have to pay exorbitant rent on its new terminal. The improved taxiways will help reduce delays and potentially enable increased aircraft utilization, although inadequate runway capacity is (and will remain) the primary cause of delays at LaGuardia Airport. Finally, the ability to utilize more mainline jets at LaGuardia will also be good for unit costs.

However, even considering all of these benefits, it would be hard to justify investing $3.4 billion in an airport that represents such a small proportion of Delta's business -- except for one key point.

New York City is the most important aviation market in the U.S. New York-based travelers generate a ton of revenue for Delta. Much of that revenue comes from transcontinental and long-haul international flights out of John F. Kennedy Airport, but those same customers also fly out of LaGuardia Airport for shorter-haul flights. Delta can't risk losing all of the business it gets from those customers by falling behind in terms of facilities at LaGuardia. Similarly, many of its customers from other cities fly to New York frequently, so providing a top-notch experience at LaGuardia will help Delta ensure the long-term loyalty of those customers.

In other words, LaGuardia is far more important to Delta Air Lines than the direct revenue contribution it gets from flights there. That's a big reason why the airline is investing such a massive sum in one of its smaller hub airports.