Please ensure Javascript is enabled for purposes of website accessibility
Free Article Join Over 1 Million Premium Members And Get More In-Depth Stock Guidance and Research
By Prosper Junior Bakiny - Nov 7, 2019 at 7:24AM

A decline in this key metric spells trouble for the e-commerce giant.

eBay ( EBAY -1.46% ) failed to impress investors with its latest earnings report, which the company released on Oct. 24. Though management's moves to spur growth previously generated optimism among investors and powered its strong stock performance year to date (prior to this most recent report) -- eBay's third-quarter results were at best average.

Revenue of $2.65 billion was in line with guidance but remained flat year over year. eBay's GAAP diluted earnings per share (EPS), which came in at $0.37, weren't particularly impressive, either, as they represented a 50% year-over-year decline (to be fair, eBay's adjusted EPS increased by close to 20%). But perhaps the scariest trend in eBay's report was a decline in its gross merchandise volume (GMV), which is the total value of sales facilitated through the company's platform. 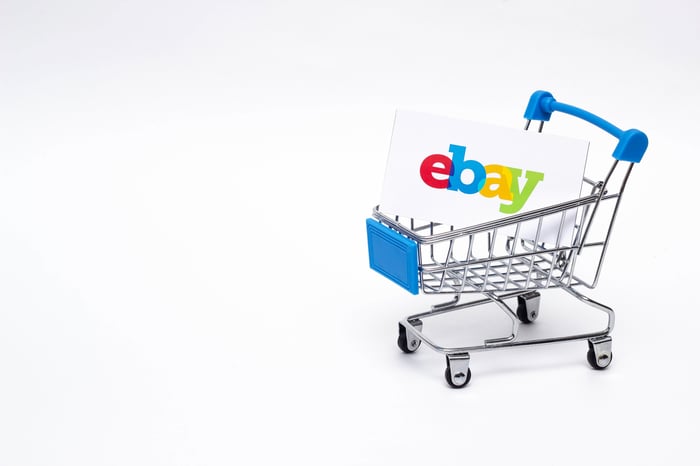 The importance of gross merchandise volume

eBay has historically generated the bulk of its revenue by charging fees to sellers on its platform. With this in mind, certain metrics underpin the company's business model, and GMV is one of them. eBay has referred to GMV as a "significant factor" that "affects its net transaction revenues."

Naturally, both the company and its shareholders (and potential investors) would like to see GMV continuously rise, but during the third quarter, the metric decreased 4% year over year. And this isn't an isolated incident: The company's GMV has been crawling -- at best -- over the past few quarters. If this were 10 years ago, perhaps eBay's alarming GMV trend wouldn't matter as much, as there weren't as many prominent companies competing in the e-commerce space at the time.

However, times have changed. Competing e-commerce platforms have risen tremendously over the past few years -- these include MercadoLibre, Etsy, and of course, Shopify. For context, in its third-quarter earnings report, Shopify reported 48% year-over-year growth for GMV. That's to say nothing of one of the undisputed king of e-commerce, Amazon, which managed to grow its product sales by 18% during the third quarter. Of course, e-commerce overall is on a dazzling upward trajectory, and there's enough room for many companies to claim a piece of the pie. But with such a competitive landscape, eBay might have an increasingly harder time generating growing revenue and earnings.

On the positive side, eBay grew the number of total active buyers on its platform 4% and now boasts 183 million active buyers worldwide. The company's take rate -- the percentage of sales eBay charges its sellers -- jumped to 8.93% from 8.39% in the year-ago period. eBay is also investing in several initiatives to attract more sellers and improve engagement on its platform, including a new delivery fulfillment system in the U.S. Such efforts could help the company grow its GMV in the future.

However, the company's near-term outlook didn't inspire confidence. The midpoint of management's revenue guidance for the fourth quarter and full year would have its top line remain flat, and the same is roughly true for the company's earnings guidance. eBay's efforts could bear fruit somewhere down the line, but with other interesting investment options in the tech sector, it might be time to look elsewhere.