It may be adding subscribers to its microblogging platform, but the additions are not translating into additional revenue from advertisers.

Add a planned move to no longer accept political ads and it's no wonder investors are nervous. The stock is down more than 25% since announcing third-quarter earnings on Oct. 23. Let's take a closer look at what is adding to investors' worries. 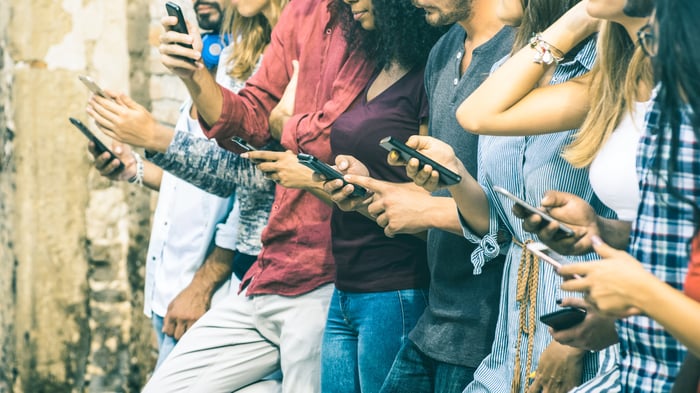 Advertising woes now and in the fourth quarter

For the quarter ending Sept. 30, Twitter reported advertising revenue of $702 million, marking an 8% year-over-year increase, but it was lower than the $756 million analysts expected. Twitter blamed problems with its Mobile Application Promotion product that hurt its ability to target ads and share data with ad partners. It also said it experienced "greater-than-expected seasonality" in its advertising business from July and into August. It did say year-over-year ad revenue growth is on the mend, doubling globally in September.

Looking ahead to its fourth quarter, the social media platform operator that's a favorite of President Trump projected revenue of between $940 million and $1.01 billion, which is short of the $1.06 billion Wall Street analysts are projecting. Twitter said the guidance reflects its current visibility, including "lingering headwinds" in advertising that it expects to weigh on the overall ad performance in the near term.

That was enough to send the tech stock plummeting. The decline was made even worse a few days later when Twitter announced it would no longer accept political ads on its platform. Its new policy kicks in on Nov. 22.

In a series of tweets, CEO Jack Dorsey said the reach of political messages should be earned and not come from buying an ad on the platform. He argued that a user's decision to follow or retweet a politician "should not be compromised by money." The statement was considered to be a jab at Facebook (NASDAQ:FB) CEO Mark Zuckerberg, who had recently made public statements that his social media website would run political ads even if it had misinformation in it.

"This isn't about free expression. This is about paying for reach. And paying to increase the reach of political speech has significant ramifications that today's democratic infrastructure may not be prepared to handle. It's worth stepping back in order to address," Dorsey wrote in his tweets on the topic.

The move to end political ads drew a line in the sand for Twitter. With a national debate raging about the role that companies like Twitter and Facebook will play in the upcoming 2020 presidential election, the two companies appear to be taking sides.

Twitter has less to lose than Facebook since revenue from political ads on its platform is minuscule in comparison. But it's also a missed opportunity to boost ad sales in the lead up to the 2020 election. According to GroupM (the ad-buying unit of WPP), political ad spending is projected to hit $9.9 billion in 2020 in the U.S. alone. During the 2018 midterm elections, $8.7 billion was spent on political ads and $6.3 billion in the 2016 election. Much of the advertising dollars spent on social media, in general, goes to Alphabet's Google and Facebook, which control a combined 56.8% of the market.

Investors are not happy about the ad ban

While Twitter's move is being well received by society and regulators who are increasingly critical of the social media platforms' influence on the 2020 elections, investors weren't happy about the news. It doesn't help that Wall Street had recently turned negative on Twitter's prospects for generating ad sales. Following on the heels of earnings, Goldman Sachs analysts lowered earnings estimates on Twitter from now through 2021 and lowered their stock rating to "neutral." The investment bank cited a lack of visibility into Twitter's ability to fix its ad platform problems and drive advertiser demand in the future.

Twitter took steps to quell concerns about its political ad ban as CFO Ned Segal tweeted that the move would not impact fourth-quarter guidance. He pointed out that Twitter earned only $3 million in political ad sales during the midterm elections of 2018. "This decision was based on principle, not money," tweeted Segal.

Whether the CFO's proclamations will be enough to assure investors is yet to be seen. It's also unclear if more users will sign on to Twitter as a result of the stand it's taking. But it's looking like Twitter's move to ban political ads and go against Facebook is backfiring from an investment perspective. Facebook's stock is up 2.3% since Twitter reported earnings and took its stand on political ads.