A proposed merger between The Stars Group and Flutter Entertainment could create a new powerhouse in online betting.

Shares of The Stars Group (TSG) gained 44.5% in October, according to data from S&P Global Market Intelligence.

The stock jumped early in the month after it was announced that Flutter Entertainment (OTC: PDYPF) would be acquiring the Canada-based betting company in a $6 billion all-stock deal: 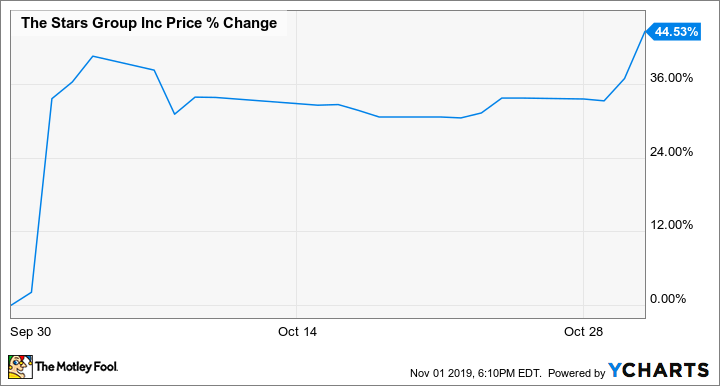 The press release detailing the proposed merger said Stars stockholders would receive 0.2253 new Flutter shares in exchange for each share they currently own. The Dublin, Ireland-based Flutter owns fantasy sports platform FanDuel and gambling sites including Paddy Power and Betfair, while The Stars Group (TSG) is most known for its PokerStars and Full Tilt platforms. The merger of the two companies would create a new powerhouse in the online-betting world. 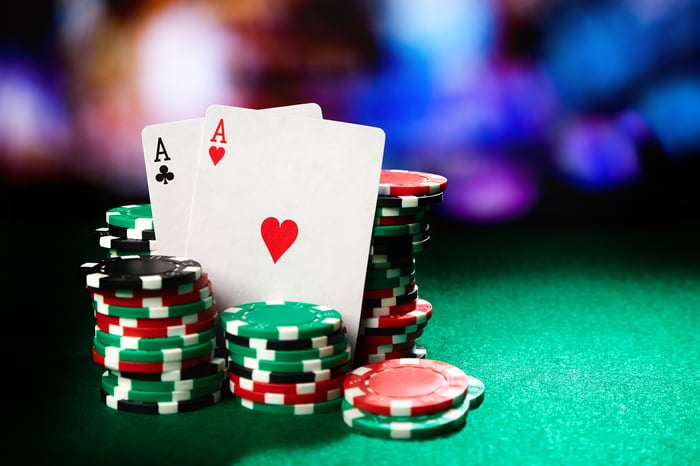 The Oct. 2 press release outlines the potential benefits of the merger as seen by both companies:

The combination will bring together two complementary businesses (the "combined group") to create a global leader in sports betting and gaming. The combined group will have a diverse portfolio of leading brands and complementary best-in-class products with a broad geographic reach. Flutter and TSG would each bring to the combined group a proven track record in using product and brand leadership to create low-cost customer acquisition channels, while optimizing value through product cross-sell. It will benefit from an enhanced global platform and improved local market reach.

The combined company would be headquartered in Dublin, have its primary stock listed on the London Stock Exchange, and report financial data in British pounds. The companies' management teams expect that the merger will result in cost-saving synergies of 140 million British pounds per year (or roughly $181 million based on current exchange rates) and help facilitate growth in the U.S. market. However, some analysts believe that Flutter will have to sell Paddy Power or other brands if the merger is to get approval from regulators. As noted by Casino.org, analysts at Morgan Stanley estimate that the company's combined revenue would be 50% higher than Bet365 -- its next biggest rival.

The Stars Group is set to publish its third-quarter earnings results before the market opens on Nov. 7. The company hasn't provided guidance for the period, but it has issued full-year targets. For the current fiscal year, the company expects to record non-GAAP (adjusted) earnings per share between $1.68 and $1.83 on revenue between $2.5 billion and $2.575 billion.

Stars and Flutter plan to have shareholders vote on the merger in the second quarter of 2020. Provided the deal gets approval from shareholders and passes regulatory muster, it's expected that the merger will then close in the third quarter of next year.

With the pending merger on the horizon, it's unlikely that the upcoming earnings release will have a big impact on The Stars Group's near-term stock performance. However, the company may choose to share some additional information about the combination with Flutter during its conference call.