In the worst day of its long life on the stock market, Expedia Group traded down by double-digit percentages Thursday.

Thursday was a terrible day to be a shareholder in Expedia Group (EXPE -0.47%). The company suffered a nearly 30% evisceration of its stock price, essentially due in large part to what Expedia says are developments basically outside of its control.

Prior to today, the company had packs of bulls supporting its share price, which had generally risen over its relatively long history. Does the apparently sudden departure of these optimistic animals mean that Expedia is no longer worthy of consideration for investors? Let's try to answer that question. 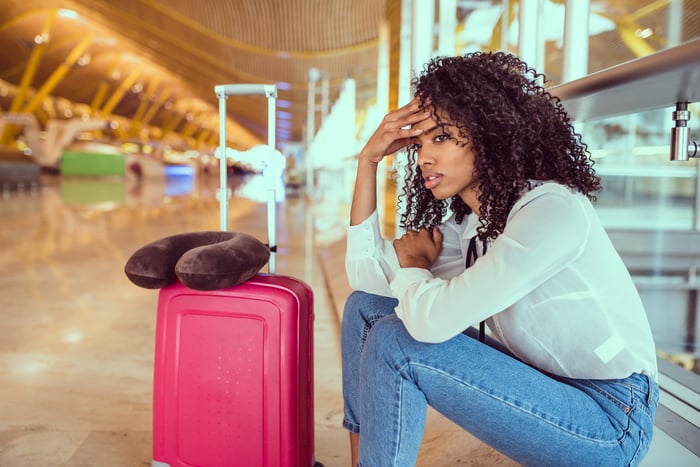 Good luck to any company going against the 300-pound gorilla that is Alphabet (GOOG 1.56%) (GOOGL 1.90%). Trying to game Alphabet in the online travel space is taking a heavy toll on Expedia, a top stock in the big online travel sector.

Alphabet's Google, of course, has stepped up its efforts in travel over the past few years. It has garnered particularly favorable notices for the prices it's able to source and the ease of use of its Google Flights site.

Expedia, in releasing its Q3 of fiscal 2019 results after market close on Wednesday, traded down a queasy 27% on Thursday, the biggest one-day slide in the stock's history.

Alphabet's search giant is a key reason why. In Expedia's conference call revealing  weaker-than-expected quarterly performance for the quarter, management said that the constant tinkering from Google was effectively making it hard for Expedia's sites to list high on the screen in travel searches.

This has jacked up expenses. In the company's words, it has led to "a related shift to high-cost marketing channels."

For the quarter, Expedia booked $3.56 billion in revenue, a 9% improvement from the same quarter last year, on bookings that also grew by 9%. Non-GAAP (adjusted) net income, however, fell by 8% to $520 million ($3.38 per share) "thanks" in no small part to those expenses.

On average, analysts were modeling a top-line result of $3.58 billion and a per-share adjusted net profit of $3.80.

Compounding that big bottom-line whiff, Expedia substantially cut its EBITDA growth guidance for the full fiscal year. It now believes this line item will rise 5% to 8%, quite some distance down from the previous estimate of 12% to 15%.

I have been a bull on the Big Travel sector for some time now, and even with these unhappy developments I still like Expedia. Granted, the Alphabet problem is a big and challenging one, and no investor wants to hear about sharp rises in marketing costs -- not to mention what these are doing, and will do, to profitability.

Yet it's helpful to remember that Expedia is still growing, no mean feat in a business where customer loyalty is near zero. (Travelers tend to grab the best deals, with little regard for what company is providing them.) The company is operating in a generally growing world economy full of people hungry for travel.

So analysts are still projecting some growth going forward, and meanwhile, this severe stock price chop makes Expedia shares far more attractive on the valuations. I would certainly consider grabbing some stock at this new discount.

Why Expedia Stock Fell 18% in December

Travel Is Back, but This Stock Still Has a Bumpy Road Ahead
405%