Zoetis Animal Health (NYSE:ZTS) appears to be on track for its best year ever. Its shares are already up more than 40% so far in 2019.

The company announced its third-quarter results before the market opened on Thursday. And the picture continues to look quite positive. Here are the highlights from Zoetis' Q3 update. 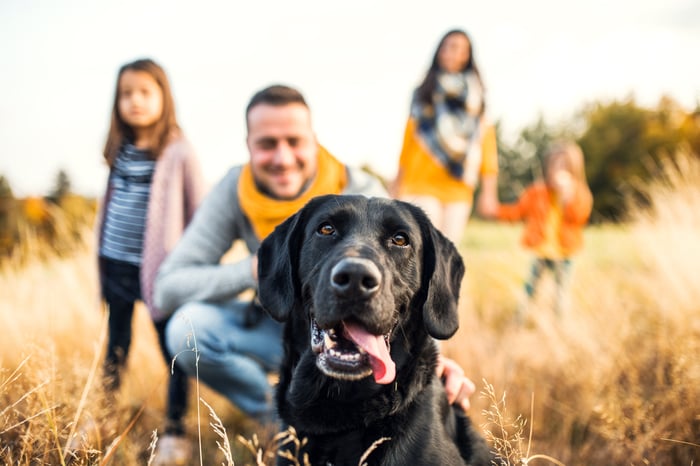 Zoetis announced Q3 revenue of $1.6 billion, a 7% increase from the $1.48 billion reported in the same quarter of the previous year. Its reported revenue topped the average analysts' revenue estimate of $1.58 billion.

The company reported third-quarter net income of $433 million, or $0.90 per share, based on generally accepted accounting principles (GAAP). This represented an impressive jump from earnings of $347 million, or $0.71 per share, reported in the same quarter of 2018.

Zoetis posted net income in the third quarter of $455 million, or $0.94 per share, on a non-GAAP basis. This reflected a 13% year-over-year increase. It also handily beat the consensus Wall Street Q3 earnings estimate of $0.88 per share.

The company's revenue growth would have looked a little better were it not for currency fluctuations. Zoetis stated that on a constant currency basis, total revenue increased by 9% year over year.

Zoetis' weak spot in the third quarter was its livestock business, with sales falling 6% from the prior-year period to $731 million. The only silver lining with livestock sales came from poultry, where revenue increased 4% year over year.

However, Zoetis fired on all cylinders in other areas. Its companion animal revenue jumped 21% year over year to $834 million. This growth was driven in large part by higher sales for parasiticide and dermatology products in addition to the acquisition of Abaxis. The company also made $19 million in the third quarter from its contract manufacturing and human health businesses, up 36% from the prior-year period.

The bottom-line improvement stemmed partially from solid revenue growth. Zoetis also benefited from a big reduction in restructuring charges and acquisition-related costs in the third quarter of 2019 compared to the prior-year period.

The company should benefit from several growth drivers going forward. It plans to launch its Simparica Trio parasiticide tablets for dogs in Europe and Canada in the first quarter of 2020 and awaits regulatory approvals for the product in the U.S. and other countries. Zoetis recently won U.S. approval for its Poulvac Procerta HVT-ND vector vaccine for protecting poultry from Marek's disease and Newcastle disease. It also completed its acquisition of Phoenix Lab, a move that will bolster Zoetis' presence in the veterinary reference lab market.

CEO Juan Ramon Alaix is retiring at the end of 2019 and will be replaced by Kristin Peck. Peck takes over a solid and growing business with great long-term growth prospects. And while many healthcare stocks could experience considerable volatility with U.S. elections in 2020 raising the possibility of sweeping healthcare reform, animal health won't be impacted by the political uncertainty. Zoetis should be able to carry its current momentum into the new year.