Please ensure Javascript is enabled for purposes of website accessibility
Log In Help Join The Motley Fool
Free Article Join Over 1 Million Premium Members And Get More In-Depth Stock Guidance and Research
By Vandita Jadeja - Nov 8, 2019 at 6:50AM

Everyone knows about Facebook. Here are some other hot social media stocks to consider for your portfolio.

It has become impossible to imagine life without social media. The ever-increasing number of messaging and photo-sharing platforms around the world highlights our increasing adoption and acceptance of this trend.

Here are three top social media stocks (besides Facebook) that should merit serious consideration if you're interested in this growing industry. 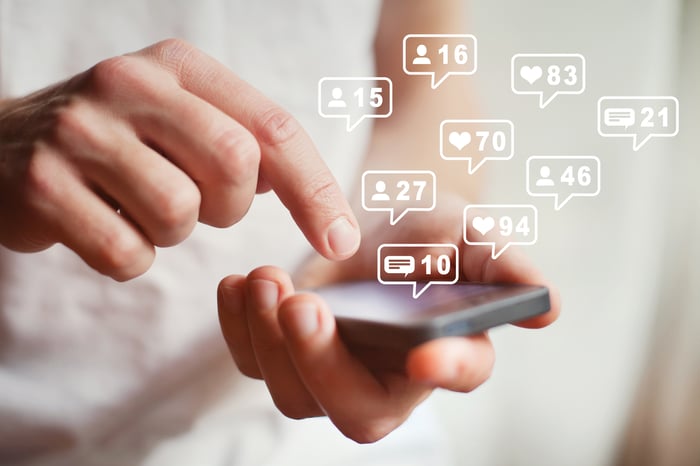 Twitter (TWTR 1.19%) is a microblogging platform that allows users to interact by posting messages within a 280-character limit. From breaking news to sports and entertainment, it seems like everything people are talking about is being talked about on Twitter.

Twitter missed analysts' earnings estimates in the third quarter, citing advertising woes and platform bugs, but we saw a lot to like, too. The site grew daily active users to 145 million, an improvement of 6 million from the second quarter and 21 million compared to the third quarter of 2018. And the company recently announced it was cleaning up its user base and focusing on businesses that lead to high ad demand. This should not only help improve the user experience, but also make the platform more attractive to advertisers. Analysts are expecting an 18% improvement in sales in 2020.

Shares are currently about 30% off their yearly high, but the strong outlook and steadily growing user base are reasons for optimism.

Snap (SNAP 2.07%) allows users to shares images, videos, and texts for a limited period of time. It has 210 million daily active users. And its stock has soared from the start of the year as the company has taken steps to increase ad revenue and enhance its user base.

For one thing, Snap's redesigned Android app is expected to be a long-term driver of growth. But the company also partnered with Amazon to build its visual search feature, which allows users to scan and search for products on the shopping portal. Further, it partnered with Adidas and Dick's Sporting Goods to launch a video game.

Encouragingly, the company's financials are getting better, and the introduction of advertising increased its revenue. Snap reported sales of $446 million in the third quarter, a 50% increase from the same period the year before. Operating losses have declined, as well.

Microblogging site Weibo (WB -0.19%) is the largest social media platform in China, with more than 486 million monthly active users. It allows users to share and receive information and upload pictures and videos. Weibo's stock has been as high as $74 and as low as $35 this year; however, it's down a bit right now from where it began in January.

As a social media leader in China, Weibo has has captured a high market share in advertising; marketing and advertising revenue reached $370.7 million in the second quarter, while overall revenue hit $431.8, both slightly ahead of the totals in the same period a year ago.

While total costs rose 2% in the quarter, CFO Fei Cao pointed to a 24% drop in sales and marketing expenses "resulting from a more disciplined channel investment strategy and better execution of marketing content." It's paying off in a growing user base -- 13% more monthly active users and 11% more daily active users. We'll learn more when the company reports third-quarter earnings in the coming days.