Please ensure Javascript is enabled for purposes of website accessibility
Free Article Join Over 1 Million Premium Members And Get More In-Depth Stock Guidance and Research
By Matthew DiLallo - Nov 8, 2019 at 9:07AM

EOG Resources ( EOG 1.84% ) has uncovered an extensive supply of low-cost oil in recent years, which is giving it the fuel to grow production and cash flow at lower crude prices. That was evident once again during the third quarter as the energy company produced more oil than expected while also generating more free cash. Meanwhile, it added even more fuel to its growth tank by discovering additional sources of low-cost oil. Consequently, the company appears well positioned to keep prospering even if oil and gas prices remain weak.

EOG's oil production came in above the top end of its guidance range, soaring 12% year over year. Fueling its high-end result was excellent well performance across its portfolio. One driver of that outperformance is that the company's wells are becoming increasingly more productive, with those completed this year producing 15% more oil over their first 90 days compared to those it finished last year. That's the result of its relentless efforts to improve.

The company also did an excellent job of continuing to drive down costs. EOG noted that its per-unit transportation costs had fallen 9% over the past year while lease and well expenses are down 3% versus the year-ago period. That enabled the company to generate $2 billion in cash flow during the quarter even though oil and gas prices remain weak. That was more than enough money to fund its capital expenses ($1.5 billion) and dividend ($166 million), enabling it to generate $337 million in free cash flow during the quarter. That boosted its cash position to $1.6 billion against $5.2 billion in debt. The company currently plans to use some of that cash to repay the $1 billion of debt that's scheduled to mature next year.

EOG also made more progress on the exploration front by expanding its premium drilling inventory through the addition of two new plays in the Delaware Basin. The Wolfcamp M formation holds an estimated 1 billion barrels of oil equivalent resources that the company believes it can tap via 855 high-return drilling locations. In the meantime, the Third Bone Spring formation holds an estimated 585 million barrels of oil equivalent that it can unlock by drilling 615 high-returning wells. These new additions have more than replaced the 640 wells the company drilled this year. As a result, it now has 10,500 total remaining locations, which is enough to last it the next 14 years at its current pace. 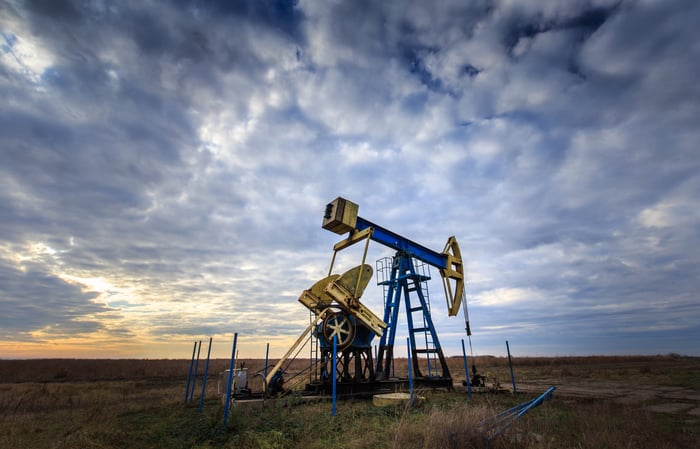 A look at what's ahead for EOG Resources

CEO Bill Thomas commented on his company's progress by saying:

EOG's operating performance has never been better. The company generated outstanding financial results in the third quarter driven by improvements in every area. We reduced operating expenses, grew volumes at double‐digit rates while lowering well costs, and generated substantial free cash flow. EOG has never been in a better position to sustain this success long into the future.

That's evident in its outlook. EOG's strong showing during the third quarter enabled it to increase its full-year oil growth target from 14% to 15% above 2018's level. Equally impressive, the company expects to deliver that faster growth rate even though it now anticipates that capital spending will be near the low end of its $6.1 billion-$6.5 billion range.

The company also provided a brief glimpse at 2020, noting that it expects to deliver similar production growth, assuming oil remains in the mid-$50s. That would also enable it to continue to generate lots of free cash, which it still intends to use to repay debt and increase its dividend.

EOG Resources is one of the best oil drillers in the U.S., which was evident by its success during the third quarter. With a vast inventory of high-return drilling locations remaining, a top-tier balance sheet, and a business that's gushing cash, EOG has the potential to generate high-octane returns for investors even if oil prices keep bouncing around. That ability to thrive no matter the market conditions makes it an ideal oil stock to consider holding for the long term.