Earnings releases tell only part of the story. Here are two things you should know from Innovative Industrial Properties' earnings call. 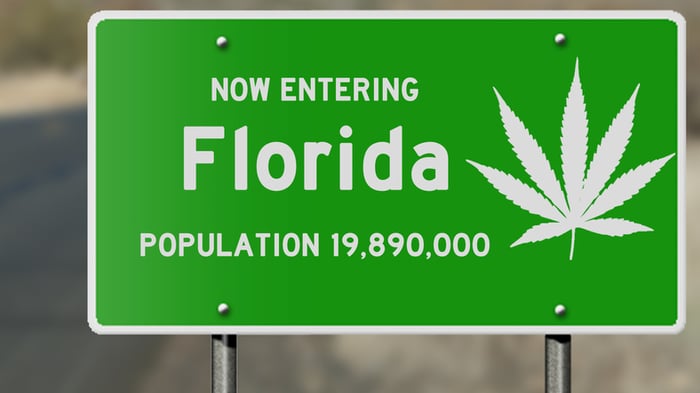 IIP bought its first property in the Sunshine State in October. (Florida's population was about 21.3 million in 2018.) Image source: Getty Images.

Properties and investments by state

Innovative Industrial Properties (IIP) acquired 10 properties during the third quarter and an additional 10 after the quarter ended through the date of the earnings release, Nov. 6. As of this date, it owned 41 properties located in 13 states, totaling about 2.8 million rentable square feet, which were fully leased with a weighted-average remaining lease term of about 15.5 years. Florida and Nevada are new states since the end of Q2.

It's not surprising that IIP is heavily focused on California, Illinois, and Michigan, as these are among the most populous states in the country where medical marijuana is legal. Another reason for the push into these states is that they're all states in which recreational-use cannabis is also already legal (California) or soon will be so. Dispensaries in Illinois and Michigan are expected to begin selling marijuana for recreational use in early 2020.

Investors can nearly bank on the company pursuing more opportunities in Florida, which is the second most populous state in the nation in which medical-use cannabis is legal.

[W]e've always indicated that we would look at a portfolio of retail-type assets with a strong grower. ... We think supporting Green Peak and their ability to generate tremendous [...] revenues from a very exciting Michigan market was appropriate. Keeping in mind that we aren't interested in one-off type transactions on retail dispensaries, just given the size and the complexity of underwriting any transaction, let alone a small retail [one].

Since the end of the second quarter, IIP has acquired five dispensaries -- four in Michigan and one in Arizona. Gold's quote is referring to the four-property transaction in Michigan. As is typical, this was a sale-leaseback transaction. Both the Michigan and Arizona transactions were with marijuana growers in which the company had an existing relationship.

As Gold said in last quarter's earnings call, retail facilities "have different yields typically and different lease terms" relative to industrial facilities that are used to grow and process cannabis. This foray into somewhat lower-yielding retail properties shouldn't concern investors, as the company only plans to purchase retailing facilities "when appropriate," Gold said. We can probably take this to mean that IIP isn't willing to go too low on yields and will only do a retail deal if it makes sense relative to the long-term relationship with a grower.