Wherever there are innovations in computing power, one will often find NVIDIA (NASDAQ:NVDA) there too. The graphics processing unit (GPU) and chip designer has been pushing the boundaries of its video game-rooted technology for years. Now, a new push is underway involving edge computing, artificial intelligence, and 5G mobile networks.

Following its trip in late October to Mobile World Congress Los Angeles -- where it announced new capabilities and end-customer partners for its edge computing lineup -- NVIDIA announced a new partnership with the U.S. Postal Service to help speed up package processing and to make delivery more accurate. Once implemented, maybe NVIDIA will even help the USPS find the $50 Starbucks gift card my mother-in-law mailed my wife and me. 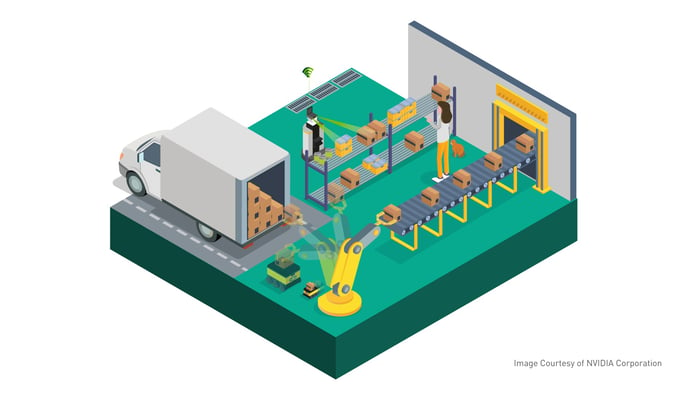 The USPS, AI, and you

Joking aside (well, sort of -- I would like that gift card), this could be a pretty big deal for the USPS. The world's largest postal service processes and delivers 485 million packages every day. That volume has swelled in recent years as e-commerce has gone mainstream, and with digital retail still growing by double digits (spending is up 12.4% this year through September, according to the U.S. Census Bureau), the number of parcels in transit looks like it will only keep rising for the indefinite future.

Despite the growing importance of mail services, the USPS has come under fire in recent years. There was pressure from the White House and a Treasury Department task force purporting that the federal mail system doesn't charge enough. Plus, with hundreds of millions of packages getting delivered every day, there's ample potential for error.

That's where NVIDIA comes in. Via Hewlett Packard Enterprise (NYSE:HPE), the USPS is purchasing NVIDIA data center GPUs to power new servers and using the new computing horsepower to train AI algorithms. The AI programs will then be deployed via NVIDIA's edge networking system to nearly 200 USPS facilities. The result, according to NVIDIA's press release, will be package processing that's 10 times faster, as well as more accurate. Testing is already underway, and full deployment is expected to be finished by the spring of 2020. Faster and more accurate mail delivery is just around the corner.

The emerging edge computing movement is old and new at the same time. It's really an extension of the cloud revolution that has boomed over the last decade. But cloud computing isn't best-suited to handle all digital operations tasks. AI tends to be a real-time need, so uploading data to a remote data center and waiting for a result doesn't work. The edge -- including NVIDIA's EGX Edge Supercomputing Platform -- solves the problem by bringing the compute power close to the source. The application is already being put to use at factories, in telecom operations, at retail stores, and now at mail processing facilities.

NVIDIA's EGX platform was only announced in early 2019, but a steady stream of news has been coming out that big organizations are putting it to use -- like Procter & Gamble, BMW, Samsung, and Walmart, to name just a few. EGX results are likely to get bundled into NVIDIA's data center reporting segment, which after huge growth through the 2019 fiscal year has taken a step back of late.

The data center segment makes up a little over a quarter of NVIDIA's total revenue, but it's a huge operation. The USPS deal by itself probably isn't going to show up in the numbers in any obvious way where we can say, "See that huge increase? That's the mail service upgrade." But it should benefit Postal Service users with better mail delivery, perhaps even increasing the chance that gift cards arrive in mailboxes safely.

As for NVIDIA's new lineup of solutions, EGX hasn't prevented the data center results from sliding this year. However, the edge is the next big thing in the development of the cloud, and it's only just getting started as organizations start to figure out how to put AI to good use. NVIDIA's data center and related products are likely to be a huge driver of results in the decade ahead.