While fans and investors alike eagerly await the debut of Disney's (NYSE:DIS) flagship streaming service -- Disney+ -- you might be surprised to know that the company actually launched a beta test for the service in the Netherlands back in September.

The soft launch debuted to the Dutch audience on Sep. 12 without the benefit of advertising or the usual Disney fanfare to promote the unveiling. The results of this early release of Disney+ may provide investors with insight on what to expect when the streaming platform debuts to U.S. and Canadian audiences on Nov. 12, and the implications are extraordinary. 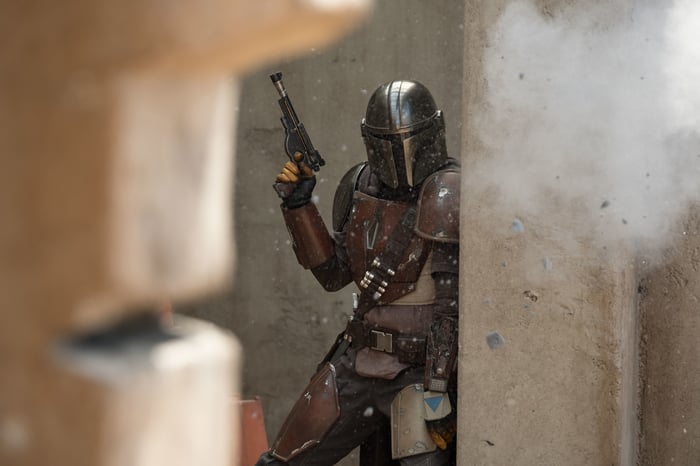 The Mandalorian will be a headliner on Disney+ when it debuts next week. Image source: Disney.

In less than a month after launch, 8% of Dutch homes had signed up for a Disney+ account, according to independent research company Telecompaper. In a country of 7.9 million households, that equates to about 632,000 subscriptions. The survey found that the Disney+ was initially drawing a younger crowd, with 15% of people in their 20s subscribing compared to just 3% of those between the ages of 50 and 66.

The survey also found that more highly educated consumers (9%) were more likely to sign up for Disney+ during the trial, compared to those with less education (4%).

In a period of about three weeks, and with only the aid of a few social media posts, Disney was able to command a significant piece of the market, with Telecompaper concluding that Disney+ "seems to be assured of the No. 2 position in the Dutch OTT [over-the-top] market."

The test confirmed the results of an earlier survey that found that 10% of Dutch consumers were ready to subscribe to Disney+. It's worth noting that an additional 29% said they were interested.

Disney+ was free to those who signed up during the test period, though they were required to provide a payment option and would be charged beginning with the official launch on Nov. 12. The study also noted that Dutch consumers took their "role as testers very seriously," flooding social media with suggestions for improving both the interface and the user experience.

To put that into perspective, streaming incumbent Netflix (NASDAQ:NFLX) reportedly had 3.17 million customers, or about 40% of the Dutch population, by the end of the third quarter. The tech giant launched in the country in September 2013, giving it a six-year head start.

The study also revealed that a full 81% of the Disney+ test subscribers also had a subscription to Netflix. Looked at another way, 15% of Netflix subscribers were testing Disney+ during the trial run. This shows that streaming isn't a zero-sum game.

We can use the results of the test to extrapolate what could happen when Disney+ launches next week, though there are no guarantees.

With 127.59 million households in the U.S., if 8% were to subscribe to Disney+ in the first few weeks, that would amount to more than 10 million customers. With more than 12 million households in Canada, that would add another 1 million viewers. Disney said it plans to have between 60 million and 90 million subscribers worldwide by the end of fiscal 2024; this would give the company a good head start on its goal.

While this is nothing more than fun with numbers, it illustrates the power of the Disney brand. If the company can attract 8% of the population of the Netherlands to Disney+ with just a few social media posts, imagine what it can do when the Disney marketing machine kicks into high gear.