The company formerly known for its pink moustache is welcoming "Movember" with a smile.

Last week, ride-hailing company Lyft (NASDAQ:LYFT) issued an upbeat third-quarter earnings report that beat expectations on two key metrics. The San Francisco-based company saw revenue jump 63% year over year to roughly $956 million, beating the $915 million expected by analysts, while reporting a loss of $1.57 per share, compared to the anticipated loss of $1.66 per share. People must have been celebrating with pink confetti thrown out the windows of a Lyft car, right?

Well, not quite. The company's stock remains around $43, nearly unchanged from where it traded hands before the report. While many aspects of the company's earnings were optimistic, long-term concerns still remain.

Here are some of the issues that continue to weigh on the company.

Lyft's a one-trick pony, but it seems to be pretty darn good at what it does. Unlike bigger brother Uber (NYSE: UBER), Lyft doesn't bother with food delivery, freight delivery, or international expansion. Instead, the ride-hailing service is growing in part by providing value-adds to its core ridesharing offering, such as its rollout of the Lyft Pink membership program, which offers a 15% fare discount and other money-saving perks for a flat monthly price.

This departs from the company's previous habit of handing out discounts like they were going out of style, with some discounts as high as 50% off every ride for some users during certain times. As a result of this shift, Lyft's Q3 earnings saw sales and marketing expenses, including coupon costs, drop to roughly $164 million from over $241 million a year ago. This cost category now consumes only 17% of Lyft's total revenue, down from 41% in the year-ago quarter. 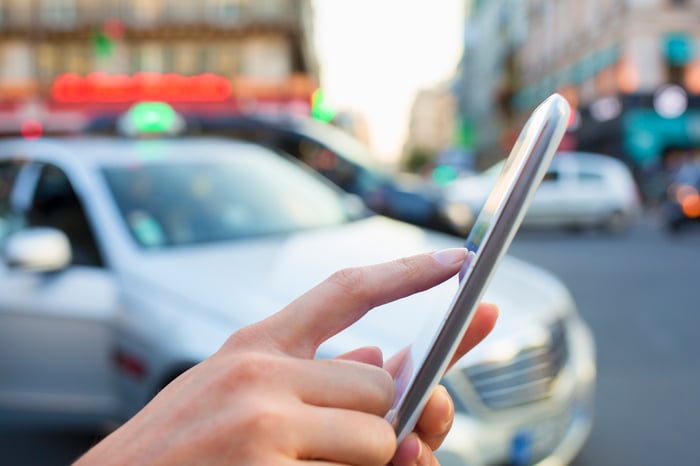 Further efforts to reduce coupon-dependence involve scoring valuable contracts to provide rides for businesses and their customers and employees. For example, many medical clinics pay for Lyft to transport patients to appointments.

Cost isn't the only factor driving use of ridesharing services. A 2017 report from consulting and research firm McKinsey and Company found that although pricing was a significant factor in ridesharing's growth, experience-based factors, such as convenience and an opportunity to socialize, were also significant reasons people flocked to ridesharing services over taxis.

By scaling back couponing, Lyft seems to be betting on McKinsey's findings. As the company's upbeat Q3 earnings suggest, it appears to be working, but investors should keep an eye on Lyft's long-term ability to maintain this approach.

The burden of driver compensation

Driver pay continues to eat a significant chunk of revenue. Lyft doesn't explicitly reveal how much it dishes out to drivers, but this amount most likely falls under "cost of revenue" for accounting purposes. This expense category totaled nearly $581 million in Q3, eating up almost 61% of the company's approximate $956 million in quarterly revenue.

Lyft and other app-based service providers are also backing a new ballot initiative for 2020 that would explicitly keep drivers as independent contractors. The initiative would also promise to pay drivers at least 120% of the minimum wage, in addition to limited subsidies for vehicle expenses and insurance benefits. At the $15 per hour minimum wage that California will require by 2022, this would be at least $18 per hour. That roughly matches a 2017 survey of drivers that reported making around $17.50 per hour on average, albeit before expenses.

And although AB5 is specific to California, it is a significant step against Lyft's status quo, and it's possible other states might take note. This all suggests that the company may still be paying out a similar, if not higher, portion of its revenue to drivers for years to come.

Ultimately, ridesharing's promised land is a fully autonomous vehicle fleet that can rake in fares without having to pay a driver. To achieve this dream, Lyft spent around $288 million on research and development (including autonomous vehicle research) during Q3, almost quadruple the approximately $77 million spent a year prior. Some of this cash goes toward the company's self-driving-vehicle pilot programs in Las Vegas and, more recently, Phoenix, through a partnership with Waymo, a subsidiary of Alphabet.

Nothing good comes easy, however, and the expected time frame for reaching full autonomy varies dramatically. Some people, like Elon Musk, believe completely human-driver-free cars, known as a "level 5" degree of autonomy, are a year away. Others, such as Waymo CEO John Krafcik, believe autonomous vehicles will never be able to entirely replace human drivers in all circumstances.

Lyft itself has set a lengthy time frame for its own implementation of a substantial level 5 fleet.

"Within 10 years, our goal is to have deployed a low-cost, scaled autonomous vehicle network that is capable of delivering a majority of the rides," Lyft said in its March 2019 IPO paperwork. "And within 15 years, we aim to deploy autonomous vehicles that are purpose-built for a broad range of ridesharing and transportation scenarios."

That's not a particularly fast time frame, and until then, the company will continue having to wrestle with driver pay problems and finding the sweet spot in how much customers are willing to shell out for a ride.