It wasn't too long ago that the stock market was enamored by companies losing vast sums of money in the pursuit of growth. Profits didn't matter. Having a realistic path to eventually turning a profit didn't matter, either.

That era appears to be over, at least for now. Shares of many money-losing growth stocks have been hammered over the past few months, and recent tech IPOs have generally not fared well. The last nail in the coffin was the failed IPO of WeWork parent The We Company. Once valued at $47 billion, We is now worth a fraction of that and could very well be worth nothing. Growth-at-all-costs is facing a reckoning.

Some money-losing companies will eventually reach the promised land of profitability, but not all of them. Here are two money-burning stocks that investors should avoid. 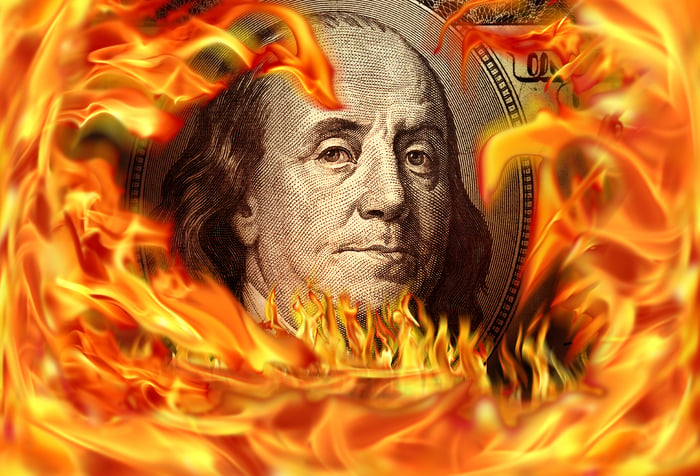 Ride-sharing pioneer Uber (NYSE:UBER) recently reported its third-quarter results, and the market wasn't happy. While total revenue was up 30% year over year, the company continued to hemorrhage cash. Uber posted a net loss of $1.16 billion and an adjusted earnings before interest, taxes, depreciation, and amortization (EBITDA) loss of $585 million in the third quarter. Through the first nine months of 2019, Uber's free cash flow was negative $2.9 billion.

The entire long-term investment thesis for Uber is that self-driving cars will eventually free the company from the need to pay drivers. If you believe that vision will be realized any time soon, I've got some swampland in Florida to sell you.

Fully self-driving cars may still be decades away, if they ever arrive, and Uber's own efforts would be a joke if they weren't so tragic. The "self-driving" Uber SUV that killed a pedestrian in Arizona last year was incapable of recognizing a jaywalker as a pedestrian, according to findings from the National Transportation Safety Board.

Uber expects to be profitable on an adjusted EBITDA basis by 2021. But adjusted EBITDA is the refuge of bad companies trying to pull a fast one on investors. "[S]o when people start talking about that sort of thing [EBITDA], either they're trying to con you in some way, or they've conned themselves, to a great degree," said Warren Buffet back in 2002.

Uber stock is now down more than 40% from its all-time high. Those losses may be just the beginning as the company continues to light money on fire in the pursuit of growth.

You'd think a company selling $2,250 exercise bikes and $39 monthly subscriptions for those bikes would be profitable... but not in this case. Peloton (NASDAQ:PTON) is spending so much on sales and marketing to hawk its expensive exercise equipment that any profit on that equipment is being nearly wiped out. The company spent around 34% of its revenue on sales and marketing in its most recent quarter, leading to a $50 million net loss.

Peloton could perhaps be profitable if it stuck to the high-end of the market. But the company somehow sees its total addressable market as 67 million households. "We think that opportunity globally is so big that we think we are right on the right balance of investing for future growth," said CEO John Foley during the first-quarter earnings call.

The plan is to ramp-up sales and marketing spending even more as the company expands to international markets and introduces new products. Peloton is trying to grow its installed base as quickly as possible so that it can sell subscriptions, no matter the cost.

But Peloton's products are not mass market and never will be as long as its prices are measured in the thousands of dollars. Peloton is going to run out of potential customers at some point, likely much sooner than the company expects.

When the reckoning comes for Peloton -- when growth sputters despite lavish spending on marketing -- it won't be pretty for the stock.