Please ensure Javascript is enabled for purposes of website accessibility
Free Article Join Over 1 Million Premium Members And Get More In-Depth Stock Guidance and Research
By David Haen - Nov 10, 2019 at 8:00AM

Both companies aim to grab a piece of the multi-billion dollar market for treating patients with the liver disease NASH. So, which one should you buy?

It's rare to find diseases with large patient populations and no approved drugs. Non-alcoholic steatohepatitis (NASH) fits the bill and emerged as one of the hottest areas in pharmaceutical research in recent years. NASH, caused by ballooning obesity rates and type 2 diabetes, leads to cirrhosis and liver cancer.

Now the scary part. According to the National Institutes for Health, 10 million to 30 million people in the U.S. have NASH, and even more people have its precursor called non-alcoholic fatty liver disease. Market research firm GlobalData predicts the NASH market will exceed $18 billion by 2026. 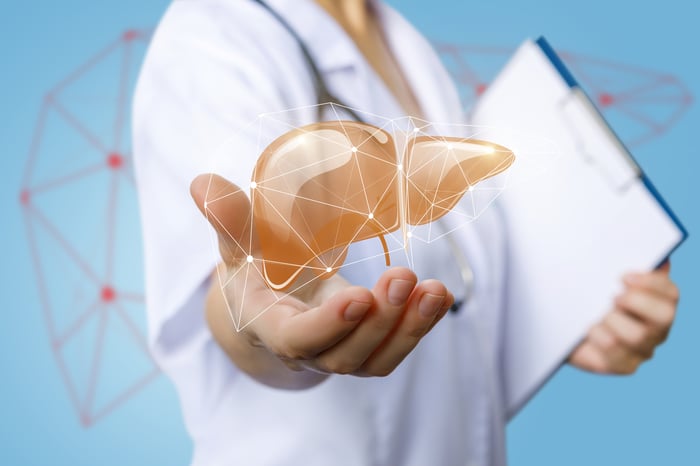 It's no wonder companies of all sizes have embarked on the development of drugs attacking the disease from all angles. Will a winner emerge from the hundreds of millions of research dollars being spent in this area? Two of the most advanced biotech companies that investors should know are Intercept Pharmaceuticals ( ICPT 1.10% ) and Genfit ( GNFT 3.12% ).

Intercept takes the lead in NASH

On Sept. 27, Intercept filed with the U.S. Food and Drug Administration (FDA) for the accelerated approval of Ocaliva for treating fibrosis associated with NASH. This means the FDA should decide before the end of the second quarter next year. Also, Intercept expects to file for approval in Europe during the fourth quarter.

If approved, Ocaliva should benefit from being the first drug on the market. However, Ocaliva focuses on treating NASH patients with fibrosis, a serious consequence of the disease. Fibrosis occurs in roughly 20% of patients with advanced stage NASH.

Notably, Intercept already sells Ocaliva. Approved in both the U.S. and Europe in 2016 as a treatment for a rare liver disease called primary biliary cholangitis, Ocaliva generated third-quarter revenues of $61.5 million. Intercept guided in its most recent earnings release for full-year sales to range from $245 million to $250 million.

Ocaliva's existing approval and revenue stream mitigates some of the risk for investors. However, the FDA's approval decision remains in the crosshairs of investors' focus. If approved, Intercept's valuation should catapult much higher than its current $2.5 billion.

French drugmaker Genfit plans to release interim phase 3 trial results with its NASH drug elafibranor in the first quarter of 2020. Genfit claims elafibranor improves both the underlying cause of NASH as well as symptoms like fibrosis. The phase 3 data in roughly 1,000 patients will show the effects after 72 weeks of treatment with either elafibranor or placebo. This would be the basis for seeking approval to market the drug.

In addition, Genfit seeks to get approval in 2020 for a new diagnostic test that simplifies the detection of "at-risk NASH" that requires drug intervention. In partnership with Covance, the drug development arm of LabCorp ( LH 1.46% ), Genfit developed the test to drive the identification and diagnosis of patients that could then benefit from drug treatment, like elafibranor.

While Genfit retains the U.S. and European rights to elafibranor, its recent investor presentation notes that the company is open to partnerships to commercialize. Further, Genfit holds a flexible view on this issue stating global, regional, or M&A transactions are all on the table.

Genfit's $550 million market cap makes up only one-fifth of Intercept's. Therein lies the beauty for risk-tolerant investors. Positive data could propel the stock. Ed Arce, an analyst at H.C. Wainwright, believes that trial will be a winner. His price target is $72, a five-fold increase from where Genfit currently trades. Another analyst, Mayank Mamtani from B. Riley/FBR, recently lowered the price target to $43. That is still three times the current price. 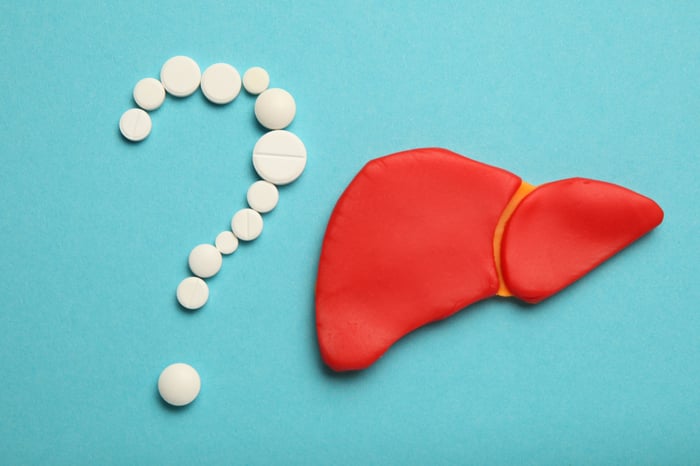 The NASH market will need several drugs for specific kinds of patients. Most of the drugs in development, like Ocaliva and elafibranor, are oral tablets. One can envision a future where combination therapies will be used. Thus, it is not a winner-take-all situation.

The size of the market makes this attractive for large pharmaceutical companies. It is quite possible, even likely, that either company could be bought, providing a windfall to investors.

Biotech companies like Intercept and Genfit force investors to get comfortable with risk. Either Genfit's trial results in the first quarter or the FDA's approval decision for Ocaliva in the second quarter will cause dramatic movements in each company's stock price.

Genfit will likely generate a bigger return if its phase 3 results read out positively. However, the less risky approach is to invest in Intercept with the lead NASH drug in development and its existing $250 million in expected revenues this year. The right choice for you depends on your risk tolerance.