It's almost showtime for Disney (NYSE:DIS). The highly anticipated debut of Disney+ is Tuesday, and a lot is riding on the success of the media giant's premium video-streaming service. With Apple (NASDAQ:AAPL) having launched its own video platform earlier this month, this is a booming niche that's making waves in November.

There's excitement in the air, and even Netflix (NASDAQ:NFLX) -- which initially took big hits after the Disney+ and Apple TV+ press events earlier this year -- is trading higher for all of 2019. This is a rapidly expanding market, and there will be plenty of winners as consumers migrate online from traditional linear television viewership. But Disney+ will still be something special. Let's spell out the two biggest reasons the House of Mouse is going to make a difference. 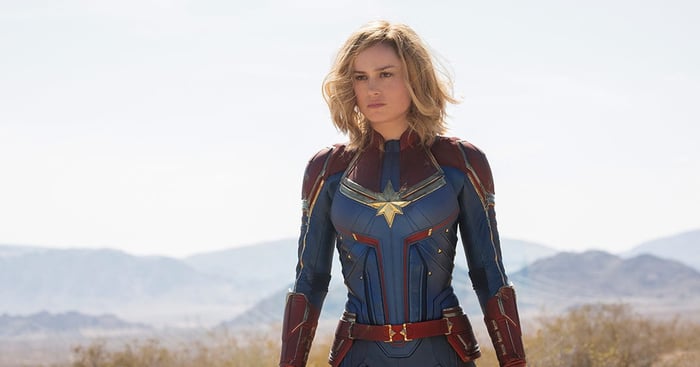 Captain Marvel will be one of the many streaming movies available on Disney+ at launch. Image source: Disney's Marvel.

Apple TV+ launched earlier this month, offering anyone who has bought a new Apple device a free one-year trial, making it highly unlikely that it has much of a paying audience out of the gate. Amazon's (NASDAQ:AMZN) Prime Video has always been available at no additional cost to anyone already paying the online retailer for Prime membership, and this accounts for the lion's share of its audience.

Disney did strike a deal to hook up select Verizon (NYSE:VZ) wireless customers with a free year of access, but it did something even smarter to grab many of its biggest fans weeks and in some cases months ahead of Tuesday's launch. Disney+ is already aggressively priced at $6.99 a month, a little more than half the cost of Netflix's most popular subscription plan. However, since this past summer, Disney has offered members of its D23 fan club, theme park pass holders, and holders of its Disney credit cards the ability to prepay for two or three years at a steep discount.

Apple TV+ likely debuted to a large audience of iOS device fans taking advantage of one-year freebies. Amazon's audience for its long-running Prime Video platform is mostly folks paying $119 a year -- or less -- for Amazon Prime instead of paying $8.99 a month for Prime Video on its own. Disney+, on the other hand, rolls out on Tuesday with hundreds of thousands if not millions of paying customers who have been locked up for a couple of years.

One of the biggest concerns for Disney shareholders as it makes this big digital push is what it's leaving on the table. The launch of Disney+ will expedite a lot of the cord-cutting that has been weighing on the cable and satellite television industry, a market where Disney is the largest recipient of carriage fees for ABC, Disney Channel, ESPN and beyond. It collects a lot more than $6.99 a month for its pole position among network providers to cable companies, but that's the wrong thing to focus on during this seismic shift in the family entertainment behemoth's strategy.

Pay TV as we know it is dying, and Disney's share price has been held back in recent years as a result of declining ESPN and Disney Channel subscribers. Disney is doing the right thing here, disrupting itself before anyone else beats it to the punch. Disney+ at $6.99 a month is a great deal, but it's not the ceiling. Disney is offering a bundle that matches Netflix at $12.99 a month, and it bundles Disney+ with ESPN+ and the ad-supported Hulu service. In short, Disney is going from being at the mercy of cable and satellite television providers that are slowly bleeding out to taking the wheel. It's cutting out the middleman to deal directly with viewers, and it's just a matter of time before the bundle of Disney+, ESPN+, and Hulu is the new package of choice for video buffs.

Disney's role as a leading blue chip stock has never been questioned. The launch of Disney+ will change everything for Disney -- transforming it from a leader in a laggard industry into a major player out of the gate for an expanding industry -- and that will only make it more of a blue chip in the process.