Gilead Sciences (NASDAQ:GILD) failed to impress investors with its latest earnings report released on Oct. 24. Not only did the company's revenues remain pretty much flat compared to the year-ago period, but the pharma giant's GAAP net income of more than $2 billion in Q3 2018 turned into a net loss this time around. This is nothing new for Gilead: The company has been struggling mightily over the past few years as its hepatitis C business is not performing nearly as well as it used to. Gilead's shares have been on a downward spiral since mid-2015. Perhaps the sole bright spot of the company's business, though, is its HIV lineup.

Passing of the torch

During the third quarter, sales of Gilead's Hepatitis C Virus (HCV) were $674 million, compared to $902 million in the third quarter of 2018, which amounts to a decline of about 26% year over year. The company blamed "competitive dynamics" for the decline in its HCV sales.

By contrast, revenues from its HIV products went in the opposite direction, up 13% year over year. It is important to note that sales of its HIV products, the main one being Biktarvy, now account for the majority of Gilead's revenues. During the third quarter, they made up around 76% of the company's total product sales. Perhaps Gilead's growing HIV sales will carry the torch from here on out and prevent the company from posting perpetually poor revenue figures. 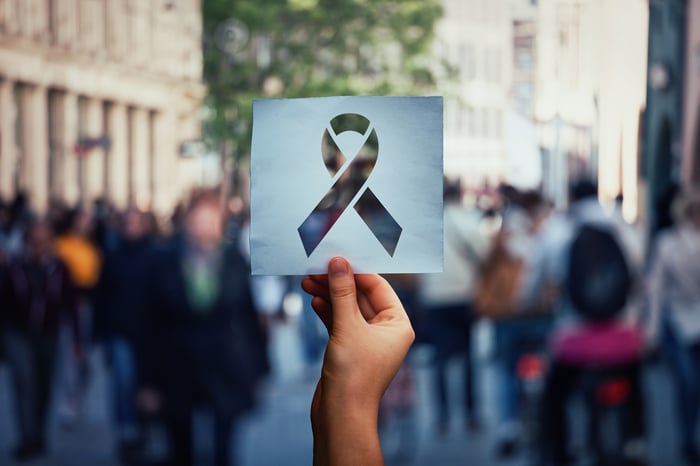 There are other modest signs that things are looking up for Gilead. First, the company's drug Descovy -- which was already approved to treat certain types of HIV -- received another approval from the U.S. Food and Drug Administration (FDA), this time for the prevention of HIV among adults and adolescents who may be exposed to it. Descovy is only the second HIV prevention medicine to be approved by the FDA (the first one was Truvada, which is also part of Gilead's lineup).

However, a major caveat is in order. The U.S. government recently filed a lawsuit against Gilead on the grounds that the company's HIV prevention drugs, Truvada and Descovy, infringe on patents held by the Department of Health and Human Services (HHS). According to the HHS, Gilead benefited from the groundbreaking work done by the Center for Disease Control and Prevention (CDC) -- which pioneered research on HIV prevention -- but has repeatedly refused to reach a licensing agreement, despite "multiple attempts" at doing so.

For its part, Gilead insists that the patents held by the HHS are not valid, but depending on the outcome of the lawsuit, the company may be ordered to pay financial compensation (perhaps in the form of royalties) to the HHS. It is, at this point, difficult to assess what impact this will have on the company's earnings, and investors should pay close attention to this story as it develops.

Second, the company's pipeline includes other HIV-focused medicines, although most of them are still in the early testing phase. Investors can also rejoice at the fact that Gilead slightly modified its guidance for the full year. The company had originally announced its total sales would fall between $21.6 billion and $22.1 billion, but Gilead now expects its product sales to be between $21.8 billion and $22.1 billion.

Gilead's GAAP net loss was probably due to its substantial research and development spending which, for the third quarter, increased by more than 400% year over year. Where is all this money going? The main culprit is likely Gilead's collaboration with Galapagos. Gilead recently made a $5.1 billion investment in the Belgian pharma company, and per the agreement (which is for 10 years), Gilead will gain access to Galapagos' portfolio of compounds.

This wasn't the first time these two companies partnered up: In late 2015, they entered into a partnership to develop medicine for the treatment of arthritis and other inflammatory diseases.

Galapagos' lineup of compounds could help Gilead find more products with which to generate revenues, thereby decreasing its top line exposure to its HIV lineup. The company's R&D expenses also went into the development of its oncology program. With all these opportunities, Gilead seems enthusiastic about its future.

I'm increasingly optimistic about the future and believe we are well positioned as we enter the last part of the year and look ahead to 2020 and beyond. We will continue to build on our success as we replenish the pipeline and bring the next wave of transformational advances to patients.

Gilead may be down, but it isn't out yet. While the future of the company is still a bit murky and uncertain, those looking to invest in pharma stocks would do well to keep an eye on this one.