You can divide 2019 into two distinct parts for Akebia Therapeutics (NASDAQ:AKBA): the good, and the bad. The biotech was on a roll earlier this year after announcing positive results from two late-stage clinical studies. But then everything fell apart, with Akebia stock sinking over the last six months.

Akebia announced its third-quarter results before the market opened on Tuesday. But don't expect those results to help turn things around for the biotech. Here are the highlights from Akebia's Q3 update, including a new deal that overshadowed its financial results. 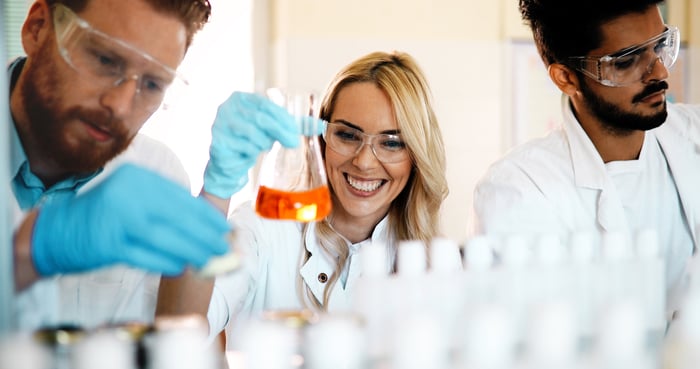 Akebia reported revenue in the third quarter of $92 million, up 73% year over year. However, this was below the average analysts' Q3 revenue estimate of $99.4 million.

The company announced a net loss in the third quarter of $54.6 million, or $0.46 per share, based on generally accepted accounting principles (GAAP). This reflected significant deterioration from Akebia's net loss of $26 million, or $0.46 per share, in the prior-year period. The consensus Wall Street estimate was for a net loss of $0.43 per share in the third quarter.

Akebia's cash, cash equivalents, and short-term investments totaled $145.6 million at the end of the third quarter. This reflected a decrease from the $321.6 million on hand as of Dec. 31, 2018.

The main story in Akebia's Q3 results centered on Auryxia. Sales for the iron-deficiency anemia drug jumped 13% year over year to $30 million. But all of this revenue was new for Akebia. The company picked up Auryxia with its acquisition of Keryx Biopharmaceuticals in late 2018.

The rest of Akebia's revenue came from its collaboration and license deals. Revenue from collaborations increased by $6.8 million from the prior-year period thanks mainly to Akebia's collaboration with Otsuka Pharmaceutical on the development of experimental anemia drug vadadustat.

Akebia's worsening bottom line resulted in part from the negative impact of non-cash charges totaling $27.1 million related to the company's merger with Keryx. However, Akebia's increased spending was also a factor. The biotech's selling, general, and administrative expenses more than tripled year over year to $34.2 million primarily due to commercialization efforts for Auryxia.

The biggest news for Akebia, though, was the company's announcement that it has entered into a loan agreement with Pharmakon Advisors to borrow $100 million. The company plans to draw $80 million of this loan later in November, with the remaining $20 million available until Dec. 31, 2020. This agreement will boost Akebia's cash position in a non-dilutive way.

The most important thing affecting the future fortunes of small biotech stocks is their pipelines. Akebia could soon have some critical pipeline news. CEO John Butler said the company believes it is "now within two quarters of our first readout of our global Phase 3 studies of vadadustat." If those results are positive, Akebia should be a huge winner next year.

Another key issue for small biotech stocks, though, is having enough cash to fund development. Akebia's loan agreement should put the company in a good position on that front. Butler said the two loan tranches, in combination with its other cash resources, should fund operations into 2021. That gets Akebia past its announcements of the late-stage results for vadadustat.