Please ensure Javascript is enabled for purposes of website accessibility
Free Article Join Over 1 Million Premium Members And Get More In-Depth Stock Guidance and Research
By Royston Yang - Nov 12, 2019 at 7:05AM

The social media giant reported strong revenue and profit growth numbers during the last quarter. Here are three reasons why those rates are sustainable.

Facebook Inc ( FB 1.55% ) just reported its Q3 2019 earnings and its earnings were, once again, stunning. Investors were blown away by a 28% year-over-year rise in revenue and a 19% year-on-year increase in net income. The social media behemoth has managed to continue growing, driving its market capitalization up fivefold since its IPO in May 2012.

Being the dominant social media network on the planet, investors may wonder if Facebook can continue to its incredible growth. After all, there is concern that growth may start to slow once the number of users on the platform hits a saturation point. Plus, there are only so many hours a day you can spend on social media before your social and working life takes a negative hit.

Although these concerns are legitimate, here are three reasons why Facebook should be able to maintain its stunning growth rates. 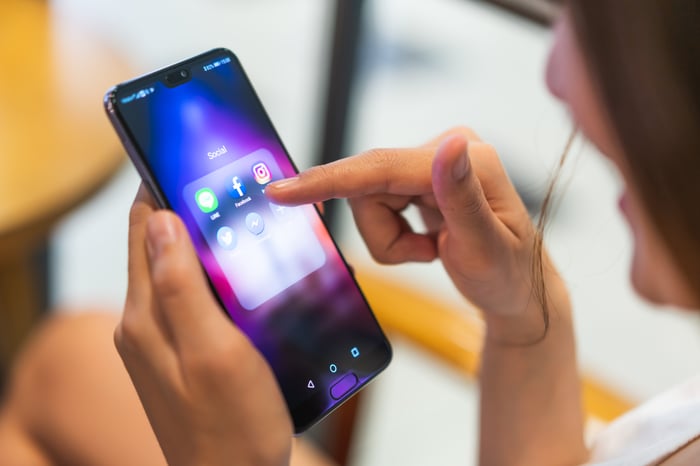 Daily Average Users (DAU) and Monthly Average Users (MAU) are important metrics that Facebook uses to measure the size of its global user community, as well as the community's engagement with Facebook's platform. They are defined as registered Facebook users who logged in and visited Facebook through its website or a mobile device within the last 30 days. DAU and MAU have continued climbing steadily for twelve consecutive quarters to hit a high of 1.6 billion and 2.45 billion respectively.

Also, back in January 2019, there were already close to 3.5 billion active social media users. Fast forward to November, this number may have gone up even more by now. As Facebook has just 2.4 billion MAU or about 69% of the total, this represents a more than one billion users worth of untapped opportunity for Facebook to capture onto its platform.

Referring again to the Digital 2019 report above, internet and social media penetration rates in many parts of the world remain low. For internet penetration rate, central and southern Asia has a rate of 50% and 42%, respectively. This ratio measures the number of internet users as a proportion of the total population and shows that the majority of each region is still not logged into the internet. For regions such as Middle and Eastern Africa, the rates are even lower at 12% and 32%, respectively. As these regions modernize and infrastructure is built to support networks, more and more people will be able to connect to the internet.

Social media penetration rates (based on MAU of the most active platforms in each country versus the total population) are low in both Eastern and Middle Africa (<10%) as well as in Central Asia (16%) and Southern Asia (24%).

These two statistics alone show that Facebook has a long runway for growth as there are still regions on this planet that are not connected to the internet or which have not embraced social media.

Facebook itself is not standing still but is continually launching new services for its users. A recent example is Facebook Dating. This was launched recently in September only in the USA and allows users to integrate their Instagram posts directly into their Facebook dating profile. The global online dating services market was valued at $6.4 billion in 2017, and this is projected to reach $9.2 billion by 2025, according to estimates from Allied Market Research.

Threads from Instagram is another new service launched just last month. This is a new camera-first messaging app that helps users stay connected to their close friends. Also, in October, Facebook News, a dedicated place for news on Facebook, was tested on a small subset of people in the USA. Though a Digital News Report survey found that only 17% of people in the USA paid for any kind of online news, Facebook may, in future, bundle this together with other chargeable services.

Facebook's growth prospects remain strong. The company is experimenting with new products and services to provide users with a more immersive and engaging experience. Over time, this can only bode well for the future of the business.