Screens, displays, and monitors are becoming an ever-increasing presence in pockets, homes, and businesses. Since Universal Display (NASDAQ:OLED), which is based in New Jersey and has a market cap of $9.4 billion, profits from the sale of materials needed in the process of making OLED screens and owns numerous patents on the process, it benefits from the increased production of displays using the technology.

OLED (Organic Light Emitting Diodes) is a flat light emitting technology, made by placing a series of organic thin films between two conductors. When electrical current is applied, a bright light is emitted. OLEDs are emissive displays that do not require a backlight and so are thinner and more efficient than LCD displays (which do require a white backlight). This tech stock is one with impressive growth that investors should be tuned into.

What have the growth numbers been thus far?

Universal Display posted quarterly revenue of $97.5 million, a 25.7% increase year over year. It raised its revenue outlook for the current fiscal year to a midpoint of $405 million, which if achieved, would mean a 62% increase from the previous fiscal year. The breakneck pace of growth has held the attention of the market throughout the year. The stock price catapulted from $91 at the beginning of the year to $204 today. 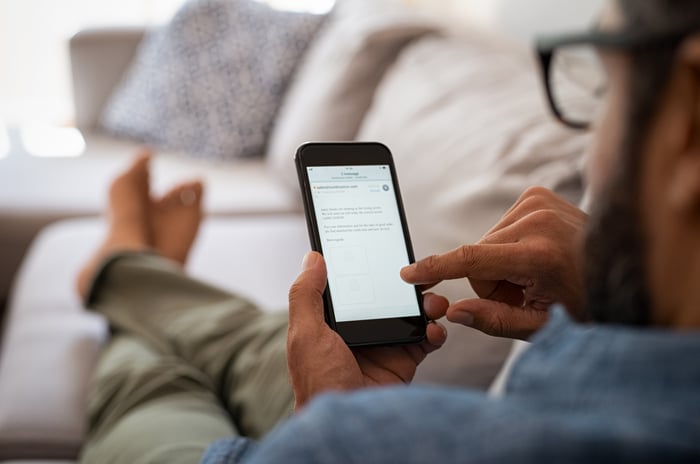 What will fuel future growth?

Universal Display has a firm hold on the OLED display market, and management painted a rosy picture of its future. Manufacturing capacity using OLED technology will be up almost 50% by year-end 2019 from 2017, and the company expects another 50% capacity growth by year-end 2021.

The manufacturing of OLED screens is in its early years. As production capacity scales up, costs will be driven down, allowing devices using the technology to reach a broader market. Lower costs of production using OLED technology will lead to innovations in smartphones, tablets, and TVs.

What are the risks to growth?

There are three prominent risks to the Universal Display growth thesis: the concentration of its sales among its top three clients, the increase of trade restrictions worldwide, and the ability to maintain its patents on OLED technologies globally.

A high concentration of sales among few clients is concerning to the long-term investor. Universal Display makes 77% of sales to its top two clients, and 89% to its top three clients. Disruptions in operations, for any reason, in either of the top two customers, will cause a tumble in revenues for Universal Display.

Although recent announcements suggest trade tensions between U.S and China are cooling, the temperature can change at a moment's notice. The added costs of tariffs to manufacturers and consumers will blunt demand. Additionally, the uncertainty created by shifting trade policy makes it difficult for manufacturers to develop long-term capex plans. If worldwide trade becomes more restrictive, manufacturers will slow down or eliminate investments in production using OLED technology.

While Universal Display holds many patents protecting its market position, these patents are not in perpetuity, and there is no guarantee that they will be able to defend or extend them. If it cannot maintain intellectual property protection for OLED technologies, its business will suffer.

To buy Universal Display is to believe in the long-term viability of its patents and the future of the OLED market. According to MarketWatch, the OLED market is forecast to grow at a CAGR of 14.27% from 2018 to 2025. The future for OLED screens includes rollable and foldable displays, such as Samsung's foldable phone and LG's rollable OLED TV.

At a P/E ratio of 72.17 and a PEG ratio of 3.11 Universal Display stock is not cheap. At those P/E and PEG ratios, the stock price reflects the growth potential of Universal Display. To participate in this pure-play opportunity, wait for a pullback on the price to start accumulating shares.