Monster Beverage ( MNST -3.25% ) and Coca-Cola ( KO -0.29% ) have a complicated relationship. Coca-Cola acquired a 17% stake in Monster in 2015, and that stake has constantly stoked rumors of a full takeover of the energy drink maker.

Monster claimed that Coca-Cola violated their deal, and entered arbitration with the company last October, but the American Arbitration Association ruled that Coca-Cola hadn't breached its contract -- the drink was technically an extension of the Coca-Cola brand instead of a new energy drink.

That ruling raised serious concerns about Monster's future, but the company dismissed those threats in its latest conference call. Let's see why Monster isn't losing much sleep over Coca-Cola Energy.

What Monster thinks about Coca-Cola Energy

During the call, Monster CEO Rodney Sacks stated that Coca-Cola was "not trying to cannibalize our existing products and take pricing from us" with Coca-Cola Energy and that each company staying in its own lane "worked reasonably well."

Sacks noted that the company faced "some challenges" in "a few countries," but that those issues have mostly been addressed. Sacks also claimed that Coca-Cola Energy's rollout was "not keeping pace with initial sales, the percentage market share has been small, and hasn't really had an impact on us." Sacks pointed out that Monster's sales in Europe remained "on track" even as Coca-Cola aggressively rolled out its energy drink.

Sacks admitted that Monster still "can't tell what Coca-Cola Energy will be in the United States" (in terms of formula, sizes, and marketing) when it launches next year, but that it will remain focused on avoiding conflicts and cannibalization.

But is Monster just puffing out its chest?

Monster's confidence in its brand is reassuring for investors, but Sacks glosses over a few nagging issues.

First, Coca-Cola's latest conference call suggests that the company's formula for Coca-Cola Energy will change in the near future. CEO James Quincey stated that the company was developing a "2.0" version for the U.S. that tastes more similar to Coca-Cola Classic, and that it might modify the drink to suit consumer tastes in its initial launch markets -- which could pull consumers from Monster. 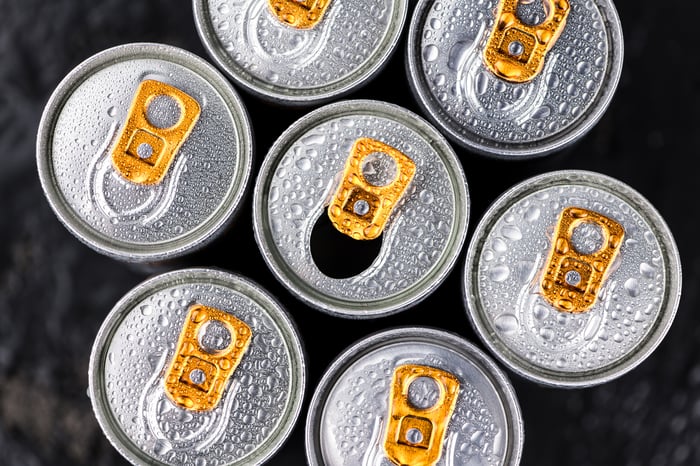 Monster and Coca-Cola also share common distributors, so keeping its energy drinks separate from Coca-Cola Energy will become increasingly difficult as Coca-Cola scales up the brand. Coca-Cola Energy also costs less than Monster, so it could be considered a cheaper alternative for a quick pick-me-up.

However, Coca-Cola also insisted that it wasn't interested in competing against Monster -- at least in the U.S. Quincey noted that the U.S. energy drink market was "much more developed than many of the other markets," so it was "trying to bring new consumers into the category rather than competing for the current ones."

What does this mean for Monster's investors?

Monster's revenue growth has remained robust over the past year, even after Coca-Cola launched its energy drink in over two dozen international markets.

During the third quarter, its core energy drinks revenue -- which accounted for 94% of its sales -- rose nearly 14% on its robust growth in overseas markets.

Monster's revenue grew less than 3% annually in the U.S. but surged 34% in the EMEA (Europe, Middle East, and Africa), 44% in Asia, and 42% in Latin America and the Caribbean. All that growth offset its 13% drop in the Oceania region. Analysts expect Monster's growth to continue with 9% sales growth and 11% earnings growth next year.

The energy drink market could still grow at a compound annual growth rate of 7.1% between 2019 and 2024 to become an $83.4 billion market, according to Mordor Intelligence, so it could still have plenty of room to grow as the sugary soda market fizzles out.

Monster has weathered tough competition from rivals like Red Bull and Rockstar in the past, so it probably isn't losing much sleep over Coca-Cola Energy. In short, Monster's investors should be mindful of Coca-Cola's moves into the energy drink market -- but they shouldn't overreact and consider it a game-changing threat.