If we look strictly at the various stock market indexes, this week so far hasn't been very exciting. No major indicator has budged much, and there haven't been any big macroeconomic or political developments moving the markets either up or down.

Yet on a company level, a clutch of top stocks delivered positive, share-price-shifting items of news. Here's the skinny on one that pleased investors Tuesday, likely on the back of developments in a hot segment of its market. 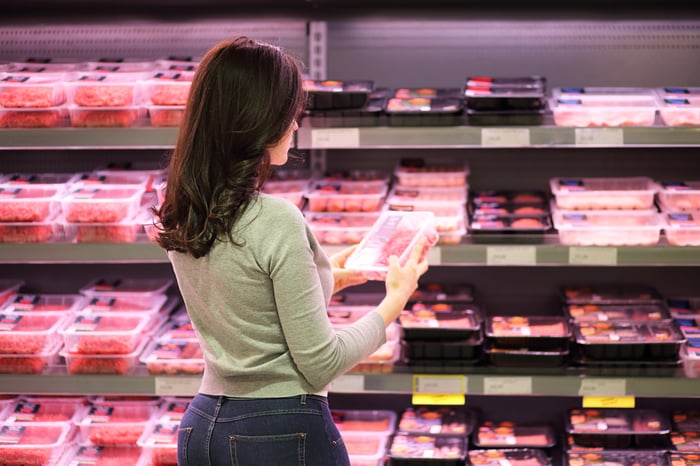 On the surface of it, Tyson Foods (NYSE:TSN) didn't have a memorable Q4 of fiscal 2019. After all, the headline numbers for that quarter, released Tuesday morning, failed to meet expectations.

Q4 saw the comestibles purveyor lift its sales by 9% on a year-over-year basis to $10.9 billion. That didn't quite reach the $11.0 billion collective estimate projected by analysts who track the stock.

So it's a bit counterintuitive that Tyson stock closed Tuesday more than 7% higher. It seems to me a key reason for this might be Raised & Rooted, the company's nearly new plant-based alternative foods line.

In a conference call discussing its Q4 performance, the company said Raised & Rooted fake-chicken nuggets are now available in around 7,000 stores. That represents a significantly higher figure than the roughly 4,000 it had previously estimated.

It also portends success for other Raised & Rooted products; the chicken nuggets were essentially a pilot offering. The next one that'll hit store shelves is a blended hamburger that's a combination of Angus beef and plant protein.

The alt-meat trend (I wouldn't call it a "craze," as some do) looks like it'll stick, at least to some degree. I can't imagine millions of carnivores suddenly switching to plant-based imitations, though, so I have my doubts as to how far it can ultimately go.

Tyson stockholders should certainly be cheered by the company's early success in the segment. However, performance in a still-limited corner of the market shouldn't exclusively influence anyone's investment decisions with this stock.

If we look at the products that still form the core of Tyson's business -- chicken, pork, beef, and prepared foods -- only chicken saw a notable (13%) year-over-year rise in sales volume. And only beef recorded an improvement in operating income.

Supplies of these traditional animal protein products are projected by the company to rise only at modest single-digit percentage rates in 2020 compared to 2019, limiting sales growth potential.

Beating Beyond Meat (and similar, relatively smaller alt-food producers like Impossible Foods) at its own game is certainly an achievement for Tyson. Is it enough to make the company's shares attractive, though? In my view, it isn't. That, combined with the limited growth potential of its core segments, makes Tyson stock a pass for me.