Please ensure Javascript is enabled for purposes of website accessibility
Free Article Join Over 1 Million Premium Members And Get More In-Depth Stock Guidance and Research
By John Seetoo - Nov 13, 2019 at 7:05AM

Losses and scandals have dragged shares of this former icon of EU financial power down into single digits. Are you tempted to buy for the bounce back?

When it comes to finding places to cut costs at cash-hemorrhaging Deutsche Bank ( DB 3.04% ), CEO Christian Sewing has been looking at bills large and small: He recently announced that the German bank -- once well-known for its lavish holiday parties -- was even cutting out its traditional daytime coffee-and-cake Christmas reception for retired employees. The news was not received well by pensioners, nor by trade unions. But Sewing, who has been trying to steer the Teutonic ship back on course, has had to take on the role of austerity "bad cop."

However, Deutsche Bank's problems are not on the micro level but the macro, and recent reports indicate that the course change Sewing is attempting on that front is proving much more difficult. 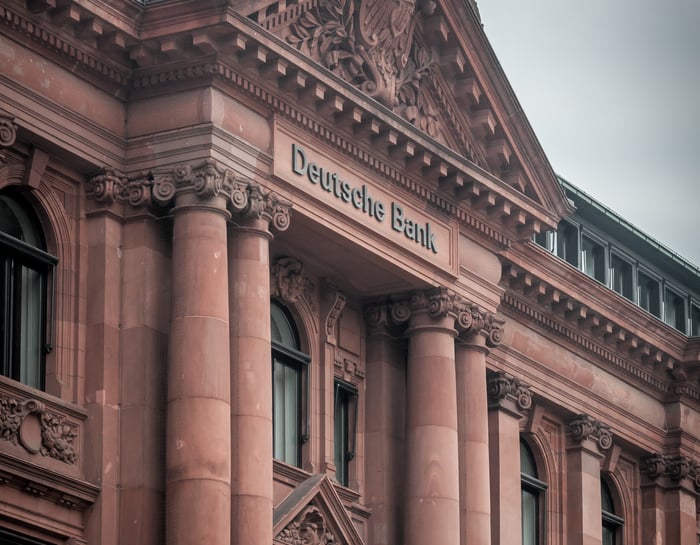 One scandal after another

Despite the German reputation for efficiency, frugality, and exactitude, the financial institution repeatedly flouted banking laws in the U.S. and in the EU with impunity. However, in 2015, the wind changed. Since then, it has been repeatedly caught with its hand in the proverbial cookie jar in a series of well-publicized scandals, and been punished accordingly:

While the fines have certainly been staggering body blows to the company's bottom line, trading losses have contributed their fair share of pain as well. On Oct. 31, Sewing had to face angry shareholders after the bank announced a $932 million third-quarter loss, which it attributed it to a 1 billion euro pre-tax loss from its Capital Release Unit -- essentially its junk portfolio of bad businesses and trading positions that have been earmarked for liquidation. Other losses reportedly stemmed from fixed-income trading in emerging market debt.

However, Deutsche Bank reported earlier this year that it took a $1.6 billion loss in a single quarter from municipal bond trades gone south. (Hang on a second -- $1.6 billion in losses in municipal bond trades?! In a single quarter?) Add on the other assorted fines, an estimated 18,000 layoffs, and a recent announcement about the sale of its hedge-fund-client-based prime brokerage unit to BNP Paribas, and there is definitely a sense that there's more bad news to follow. The depths and breadth of those potential issues are still unknown, but they could conceivably lead to repercussions that will be felt in the U.S. as well as across Europe.

The improprieties keep piling up

Sewing thus far has given investors and analysts lip service and public-relations spin as regards his plans to lift the bank back into the black. Executives are all publicly adamant that it will return to profitability in 2020. But it looks like management has yet to change its ways, and is still seeking short cuts.

The European Central Bank (ECB) requires banks under its purview to apply for approval if they wish to use their capital to purchase risky or illiquid securities. Although Deutsche Bank applied in 2014, the ECB turned it down. It ignored that decision and bought them anyway, before being granted approval in 2017.

In September, the ECB was reportedly looking to investigate junk bond trading improprieties at Deutsche Bank, which is accused of  propping up the values of its own illiquid AT1 and AT2 securities, and buying them without official clearance.

Additionally, in 2018, at a time when the DOJ was investigating the bank's possible involvement with money laundering, Deutsche approved the sale of a $72 million Silicon Valley property to a Russian oligarch. Despite the obvious reputational and regulatory risks, the global executive committee apparently overruled the bank's internal U.S. AML compliance officer to allow the sale. A Justice Department investigation into the transaction is currently under way.

How much of the pain is priced in?

Early in 2015, shares of Deutsche Bank, the 15th-largest bank in the world by total assets, according to FXSSI, hit a high for that year of around $35. But by the end of 2015, matters had deteriorated substantially, and it shifted from a profit to a per-share annual loss of $4.52. Shares have only slid further in the years since, and recently, they've been trading in the vicinity of $7.

Today, the bank has a trailing 12-month loss of $1.12 per share. Continued IT problems with payment processing that are delaying the transactions of tens of thousands of customers in the UK, four consecutive quarters of earnings misses (in the latest quarter, it undershot estimates by $0.29 per share), and strengthening calls for debt-ridden Italy to abandon the euro contribute to gloom around Deutsche Bank. Negative sentiment predominates even though the bloodletting has apparently ended for now. Should any of the outstanding legal, criminal and financial issues prove to be worse than what has already been factored into the current share price, the potential repercussions could be huge. This "sword of Damocles" scenario is exacerbated by the fact that no one can predict how long any of these individual situations will take to resolve.

If no further fines are assessed on the bank based on the ongoing investigations, the stock price could rise back into double digits purely from investor relief. That would take some of the pressure off Sewing as he continues to cut costs and liquidate nonperforming assets. However, any one of the legal cases has the potential to get Deutsche Bank suspended or even banned from doing at least some aspects of business in the U.S. or UK, especially if they expose explicit criminality, such as money-laundering, fraud, or other high-level violations. Under such a worst-case scenario, Deutsche Bank's share price could plumb new depths.

While some investors may think that all this makes now a good time to bottom-fish, perhaps it might be more prudent to wait and see if yet another shoe drops.

Why Shares of Deutsche Bank Are Trading Higher Today