Tesla (NASDAQ:TSLA) bears have reason to worry: The green-car maker was able to post a surprise profit during its just-reported third quarter. It's also showing interest in diversifying its business in a more focused way.

Late last month, Tesla rolled out the third version of its solar roof tiles , a result of its $2.6 billion acquisition of SolarCity in 2016 . Meanwhile, on its third-quarter earnings conference call, Tesla CEO Elon Musk said the company's energy business will eventually be as big as or bigger than its electric-vehicle operations. Musk said the energy business was put on the back burner for the past two years as Tesla worked out problems with the Model 3. With those in the rearview mirror, the executive said Tesla can now focus on its energy business.

Tesla's been there before with little success with solar roof tiles

The new solar roof tile is a big test for Tesla in the residential solar energy market. It has long tried to justify the acquisition of SolarCity and is hanging its hat partly on solar roof tiles to meet that end. The older versions failed to take off, but Tesla is using fewer parts and different materials this time around. 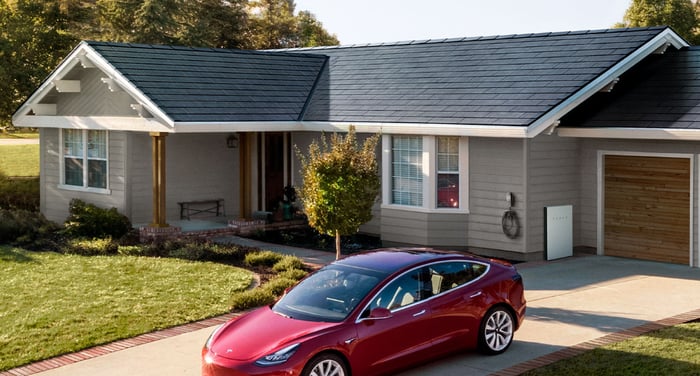 Tesla's goal is to eventually install these titles on 1,000 roofs each week. That won't happen in the beginning because specially trained installers will be required, but in the future, any contractor will be able to place them on rooftops.  It's not the first time Musk has set that goal. In a tweet this summer, he laid out that same time table.

Tesla has been trying to perfect these solar roof tiles for about three years, with the first two versions failing to take off. "Version 1 and 2 [is] where we're still sort of figuring things out. Version 3, I think, is finally ready for the big time," said Musk during Tesla's third-quarter earnings conference call.  Whether that is true remains to be seen. After all the other iterations of the solar roof tiles have failed to take off with the masses. At the same time that its residential energy business has failed to take off, its powerwall installation business has been growing.

Bears have more to worry about than Tesla's energy aspirations, even if nothing comes of earmarking billions of dollars to a business line that may not prove successful. There's also a lot of good news coming out of the electric-car business it pioneered. For the third quarter, Tesla reported a surprise profit and provided an upbeat outlook about the remainder of the year. Adjusted earnings came in at $1.86 a share, blowing past Wall Street's expectations of a loss of $0.42 a share. Revenue of $6.3 billion was in line with views.

Most of Tesla's sales came from its lower-priced Model 3 sedans. Nevertheless, gross margins increased by nearly 23% thanks to a decline in operating expenses. Tesla sold 97,000 electric vehicles during the quarter.  It's Smart Summons feature, which lets Tesla owners call their cars to them from parking spaces, has been a huge hit since it launched during the third quarter. Tesla said it's already been used more than a million times.

Tesla also revealed its Gigafactory Shanghai is ready for production, taking only 10 months to build. Tesla said it was 65% less expensive to build than its manufacturing production facility  for the Model 3 in the U.S. "Gigafactory Shanghai will become a template for future growth," Musk said on the call. "We're planning to build model-wise in Shanghai as well of course, and build a Gigafactory in Europe." Musk said Tesla will announce the location for the European Gigafactory before 2019 is over.

To add even more potentially positive news to the mix, Tesla also said it's Model Y crossover is ahead of schedule, with a launch expected in the summer of 2020. Musk thinks the Model Y will outsell the Model S, Model X, and Model 3 combined. On top of all that, Tesla plans to roll out a limited number of its Tesla Semi trucks in 2020.

Lots of "ifs" Tesla has to overcome

With Musk setting Tesla's future course and with the company having a strong third quarter, it's not surprising investors are rewarding the green-car maker. Since Tesla reported earnings in late October, the stock has been climbing, with shares up around 30%. The day after Tesla released its earnings report, its shares gained more than 16%.

Shorts could be on tap for more losses if Tesla is able to deliver on its vision of the future. There are a lot of "ifs" for a company that has a track record for disappointing and a CEO who has been known to make claims that never come to fruition. In order for the stock to continue its upward trajectory, Tesla will need to launch the Model Y with nothing in the way of production snafus -- and consumers are going to want to have it as much as the Model 3. At the same time, Tesla has to keep electric-truck competition at bay, continue to add innovation to its software, and grow its energy business. That's a tall order, but one that could reward bulls if Tesla is successful.