Please ensure Javascript is enabled for purposes of website accessibility
Free Article Join Over 1 Million Premium Members And Get More In-Depth Stock Guidance and Research
By Andrew Barber - Nov 13, 2019 at 9:22AM

A slowing global economy and trade war concerns have weighed heavily on US paper producers, who depend on demand for consumer product packaging from abroad against the backdrop of e-commerce shipping at home. As if that weren't enough, volatile materials costs have put additional pressure on major players like International Paper ( IP -0.65% ), Packaging Corporation of America ( PKG 0.10% ), and Domtar ( UFS 0.02% ). The question facing investors is whether now is the time to buy into the sector as troubles fade and valuations are attractive — or whether another shoe is likely to drop. 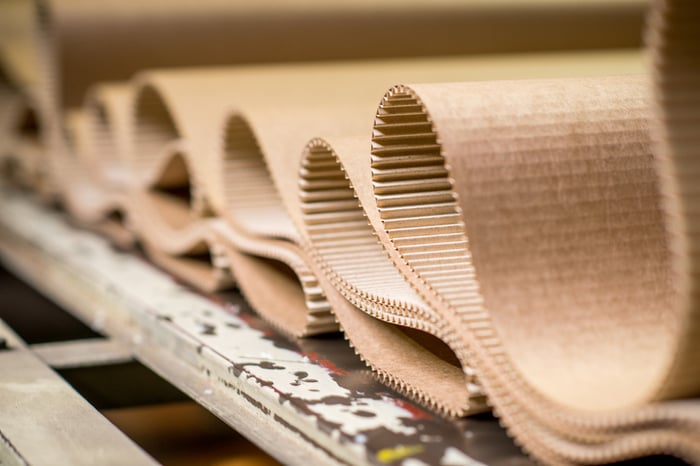 Beaten to a pulp

The past few years have seen extreme price volatility for the raw wood pulp used to make paper products.

Pulp costs began climbing sharply during the second quarter of 2017, owing in part to to temporary tariffs imposed on Canada by the Trump administration as well as plant closures, reaching a peak roughly 40% higher by the final months of 2018.

But in recent quarters, surging inventories drove these prices back down, according to data compiled by RISI. Statistics from the Pulp and Paper Products Council (PPPC) show that producer stockpiles rose to a high of 50 days' worth of supply during the second half of 2018, versus long-term averages in the low 30 days range during the run up in prices.

The latest PPPC data for September indicates that inventories have kept shrinking, if more slowly. With pulp inventory levels normalizing, a short-term bottom for pulp prices appears to be forming roughly $300 a ton below the peak in 2018 -- good news for paper producers who have been forced to ride out this volatility.

Recent third-quarter releases by three primary US market players show that, while they agree that pulp price volatility has abated, each is taking a different path forward.

International Paper's third-quarter results were disappointing despite besting analyst expectations, with adjusted earnings per share 30% lower than the same quarter in 2018 and lower than forecast top-line sales. While pulp pricing played a role, the major driver of this weakness was the industrial packaging segment, which declined in both sales and operating profits.

While concerns over an expected softer upcoming holiday season for Amazon.com and other e-commerce giants hang over the retail sector, it is worth remembering that Amazon accounts for less than 10% of total containerboard customer mix for International Paper. Other segments, such as white paper, have continued to see profits hold up in recent quarters despite sluggish demand, suggesting that International Paper's running its operations efficiently.

Critically, IP management announced a 10th consecutive annual increase in dividend payout this year, with up to 50% of free cash flow earmarked for shareholder yield going forward, and remaining inflows directed toward debt reduction. Although these are bullish developments, this move to keep dividends growing and leverage shrinking means less money left for IP's buyback program, which has reduced shares outstanding of more than 5% since the start of 2018.

Domtar bounces back with buybacks

Like IP, Domtar also experienced a drag on performance in recent quarters as pulp prices declined and a stronger dollar weighed on overseas sales. Third-quarter earnings handily exceeded Wall Street's estimates by 50%, but remained far below the same period last year, when pulp prices were higher. In response to falling prices, Domtar streamlined inventory by 20,000 tons.

The company also continued to aggressively repurchase shares at stock prices that dipped more than 20% below trailing one-year average levels in recent months. The brisk pace of share buying is slated to continue with the Nov. 6 announcement of a $300 million increase in capital earmarked for the repurchase program. That will bring the total available to spend to $478 million – a good omen for the coming quarters.

Packaging Corp stays lean in the face of pressure

Packaging Corp of America's third-quarter results registered slightly stronger than forecast, at $1.92 EPS versus expectations for $1.90. But company management cautioned investors that problems for containerboard markets remain. With a PE ratio that, at over 14, is higher than peers, IP does not look cheap on a relative basis, and there are no buybacks planned for the coming months.

As such, PKG may be more vulnerable to selling pressure driven by trade fears or weakness in online holiday shopping than some competitors. That said, impressive execution in white paper segments during the third quarter indicates that company management remains focused on containing fallout from declining prices.

As Q4 kicks off, paper producers find themselves in a somewhat precarious position. Although there are signals that fundamentals are shoring up after the sudden sell-off in pulp, further price declines are possible. Any unwelcome softness in holiday online sales would add to the paper industry's headaches. Finally, management at Domtar, International Paper, and Packaging Corp have managed to successfully navigate difficult macro terrain in the first three quarters under the shadow of China US trade negotiations. But as uncertainty over a successful deal lingers, investors may choose to wait for more confirmation that the worst is over before buying paper stocks.

4 Stocks to Buy With Dividends Yielding More Than 6%