Shares of Luckin Coffee (OTC:LKNC.Y) spiked more than 13% on Wednesday after the coffee chain reported a smaller-than-expected loss and surging sales. The company continues to open stores at an impressive pace as it builds out its footprint in its native China.

Luckin, which held its initial public offering in May, on Wednesday reported a third-quarter adjusted loss of $0.32 per share, better than the $0.37 loss analysts had expected. Revenue, at 1.493 billion yuan ($208.9 million), was $3 million shy of consensus but up 558% year over year, and average monthly total items sold climbed 470% from the same three months of 2018 to 44.2 million. 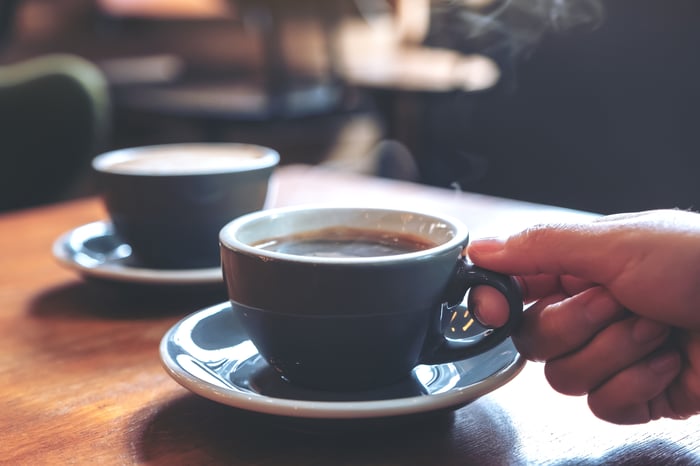 The company opened about 700 stores in the quarter, taking its total in China to 3,680. That's still fewer than the 4,000-plus stores Starbucks operates in China, but Luckin is quickly closing the gap.

"During the third quarter, sales from freshly brewed coffee drinks continued to maintain very strong growth, and we believe we will reach our goal to become the largest coffee player in China by the end of this year," CEO and co-founder Jenny Zhiya Qian said in a statement. "China's coffee market remains highly underpenetrated so we are very excited about the growth potential ahead of us."

Luckin said it expects net revenue to come in between 2.1 billion yuan and 2.2 billion yuan in the fourth quarter, which would continue the pattern of impressive quarter-to-quarter growth. The company also reported a store-level profit margin of 12.5%, compared to a loss a year prior. Qian said in the statement that she expects the margins to grow along with sales volume.

"These achievements follow a clear trend: an increase in volumes, efficiency and, as a result, profitability," Qian said.

The market loves a good growth story, and for now at least, Luckin is delivering.