It's no secret that global economic growth is slowing right now, and many investors are worried that a downturn is coming. While it's important to note that most economists are not forecasting a recession, investors may still want to position themselves for one, or at least increase the weight of defensive stocks in their portfolios. In this context, here are three investment themes and stocks to prepare for a recessionary scenario. 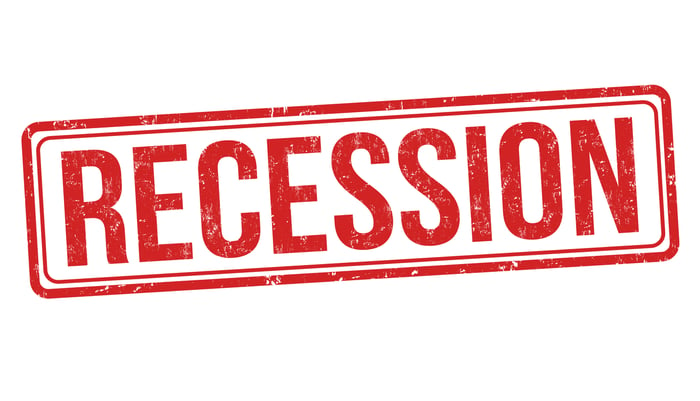 First, let's consider a few types of businesses, and the attributes that position them to outperform in a recession.

Now, let's review some of the details behind these assertions.

Auto-parts retailers do well in a slowdown

You'd be hard-pressed to find many groups of stocks that grew both revenue and earnings through the last recession, but that's exactly what the auto parts retailers did, as the chart below shows. Trailing 12-month (TTM) revenue and earnings rose in the 2007-2011 period and it's no coincidence that U.S. light-vehicle sales declined over the period. Simply put, declining sales of new cars mean more miles driven by older cars -- which is music to the ears of those whose business it is to keep those vehicles on the road. 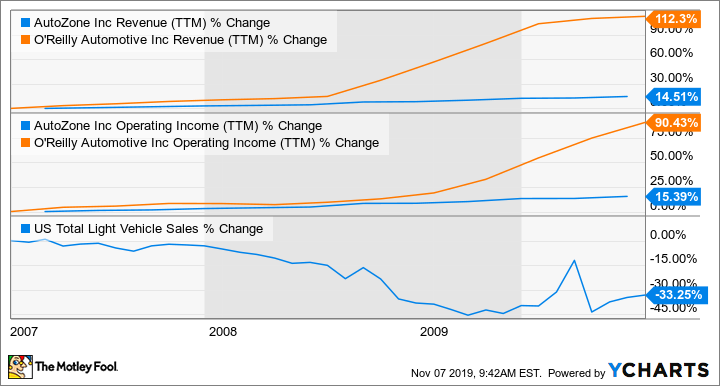 Indeed, a similar pattern has been occurring in recent years, as first a slowdown and then an actual decline in light vehicle sales has been accompanied by sales growth for the auto parts retailers. 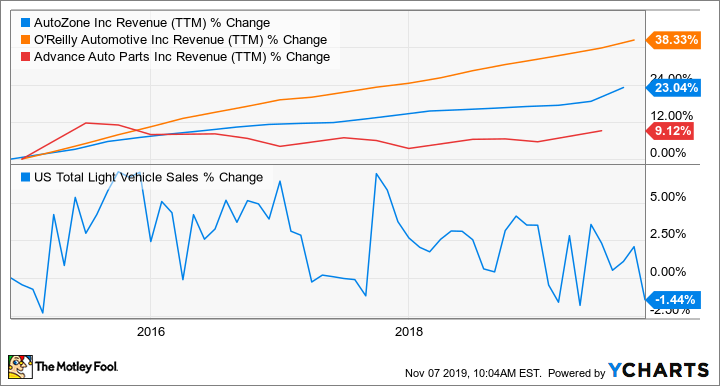 When the next recession occurs, it's a safe bet that automobile sales will decline further, and auto parts retailers will benefit accordingly. The pick of the bunch is probably O'Reilly Automotive. Its relatively high exposure to the "Do It For Me" (DIFM) market (around 43% of total sales) means it's less exposed to threats from online competition. Professionals in the DIFM segment usually require their parts immediately, and will buy in-store if they can, as opposed to the Do It Yourself (DIY) crowd, who may have more time flexibility and willingness to wait for an e-tailer's delivery.

During the last recession, Zoetis was still the animal healthcare segment of pharmaceutical giant Pfizer (NYSE:PFE). It has since spun off publicly, but to get an idea of how it might do as a stand-alone business in a downturn, let's focus on how it performed when it was part of Pfizer.

The picture is complicated further by Pfizer's merger with Wyeth (which added animal health solutions) in 2009, so I've used the figures for the legacy Pfizer animal health operations. Its flat growth in 2009 was a fairly commendable performance in a year when U.S. GDP shrank by 2.5%. 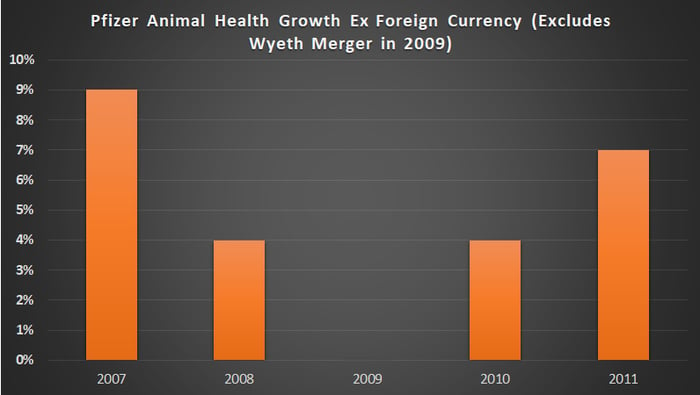 After a near 42% stock price rise so far in 2019, Zoetis now trades at 30 times its estimated 2020 EPS of $3.98 -- hardly a superficially cheap stock. There's little doubt it's been bid up by the market in part for its recession-resilient qualities. That said, if you are worried about a protracted slowdown in the economy, Zoetis is probably a good place to park some of your money.

Ball Corp. is arguably the most interesting investment opportunity in this batch. It currently derives around 90% of its earnings from beverage packaging -- the rest comes from its aerospace operations. And here too, the evidence from the last recession suggests that Ball has the ability to grow its earnings during a downturn.

One reason for that is that the consumption of canned beverages -- and thus, demand for Ball's products -- isn't particularly tied to the cyclical behavior of the economy.

In addition, its costs are heavily exposed to the prices of raw materials, principally aluminum. If a protracted recession causes a slump in demand for aluminum then the decline in Ball's cost of sales due to lower aluminum prices could more than compensate for any revenue lost, even as it passed through those some of those lower prices to its customers.

A good example comes from 2009, in the heart of the Great Recession.

Beverage can packaging sales volumes in the Americas and Asia were up 2%, but sales revenues were down 3% "primarily as a result of the impact of lower aluminum prices" according to SEC filings. However, Ball's overall cost of sales fell in 2009, more than compensating for any lost revenue -- as shown by the fact that earnings grew in 2009 and 2010.

Fast-forward to today. The company has divested itself of its more-cyclical food and aerosol container packaging businesses, and is in the middle of ramping up capacity to meet the demand growth generated by the trends toward preferring aluminum packaging to plastic. Consequently, CEO John Hayes said he now believes long-term unit volume growth is more likely to be 4% annually, rather than the previously forecast 2%.

Ball has already proven it can grow earnings in a recession. With its enhanced growth prospects in place, it could do so again.