Please ensure Javascript is enabled for purposes of website accessibility
Free Article Join Over 1 Million Premium Members And Get More In-Depth Stock Guidance and Research
By Evan Niu, CFA - Nov 14, 2019 at 6:00AM

Chromebooks might be cheap, but they don't help students succeed, according to Schiller.

Apple ( AAPL -1.17% ) has been trying for years to pitch the iPad as the ultimate computing device for educational markets, but the tablet has faced stiff competition from Alphabet ( GOOG -0.87% ) ( GOOGL -0.68% ) subsidiary Google. Thanks in large part to affordable price points, Chromebooks have taken off in the K-12 education market, even as MacBooks remain incredibly popular for college students and higher education.

In connection to announcing the 16-inch MacBook Pro this week, Apple marketing chief Phil Schiller sat down for an interview with CNET, and took a jab at Chromebooks in the process. 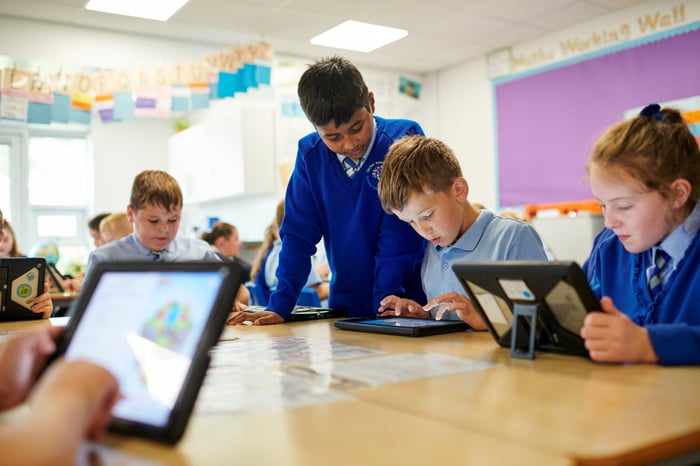 In the interview, Schiller said the iPad does well in lower grades. Apple has been advocating for coding to become a standard part of educational curriculums, with CEO Tim Cook saying earlier this year that coding is "the most important second language you can learn." The company offers its Swift Playgrounds app as a way to introduce young students to Apple's programming language, for instance.

Schiller argues that young users on Chromebooks aren't really all that engaged, which is more important in educational settings.

"We did a study, many many years ago in education, about the importance and the role of technology in the classroom, how can it help with the education process," Schiller told the outlet. "The result of this education research we did was that the students who succeed are the ones who are most engaged, which is really simple."

Chromebooks aren't engaging for students, Schiller insists, claiming that the only reason why Chromebooks are popular in the educational market is the low cost. The marketing chief said:

Chromebooks have gotten to the classroom because, frankly, they're cheap testing tools for required testing. If all you want to do is test kids, well, maybe a cheap notebook will do that. But they're not going to succeed.

Chromebooks dominate the K-12 market in the U.S.

Schiller is right that low-cost Chromebooks appeal to school districts with limited budgets, but it's also true that many schools simply can't afford iPads that cost twice as much (or more) as Chromebooks. Even if schools prefer the iPad, Apple's tablet isn't an option in many cases.

Chromebooks have steadily grown their share of the K-12 market in the U.S. over the years, representing a dominant 60% of total shipments in 2018, according to Futuresource Consulting, while the iPad saw K-12 shipments decline. Apple is growing in a handful of educational markets in Europe, but overall Chromebook is taking over the classroom. The rise of hybrid and convertible devices is also eating into tablet demand.

Apple will need to justify the value that it can deliver at those higher price points. "Moving forward, as the penetration of mobile devices continues to expand, there will be increasing focus on what the OS supplier can offer beyond device functionality and price point," says Futuresource analyst Ben Davis.