In its fiscal fourth-quarter 2019 report released on Wednesday, Energizer Holdings (NYSE:ENR) reaped expected tangible benefits from its two separate acquisitions of battery and auto business lines from Spectrum Brands in January of this year. Yet the battery giant also chalked up surprisingly vigorous organic growth, and provided a stable financial outlook for the upcoming fiscal year.

The results certainly charged shareholders' batteries, as Energizer's stock soared 15% on Wednesday, and ascended by an additional 1.5% by midday on Thursday.

As we review results below, note that all comparative numbers are presented against the prior-year quarter.

Essential highlights of the report 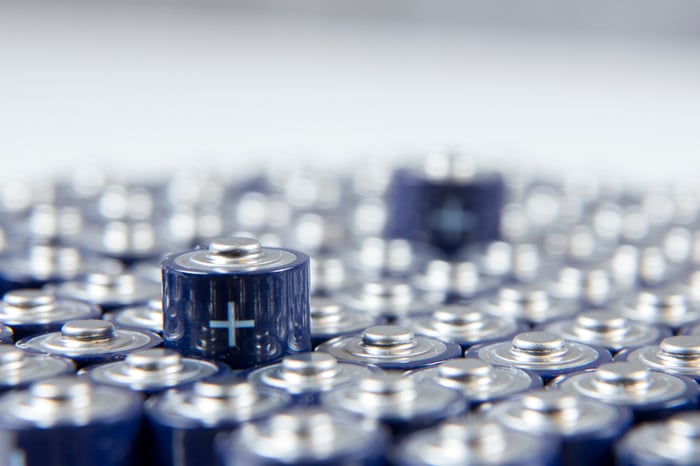 In Energizer's press release, CEO Alan Hoskins reflected on the Spectrum transactions, which expanded the company's position as a consumer staples stalwart in 2019, and he shared overarching goals for 2020:

Fiscal 2019 was an important year in transforming Energizer into a diversified household products leader in Battery, Lights and Auto Care which will create significant value for our shareholders. Our organization did a terrific job achieving our full year financial objectives while making tremendous progress integrating the acquired battery and auto care businesses. Looking forward to fiscal year 2020, we expect a fifth consecutive year of organic revenue growth and a significant increase in our adjusted EBITDA and free cash flow, allowing us to continue investing in our business and reduce debt.

A solid outlook for fiscal 2020

Following the company's unexpectedly healthy organic growth in the fourth quarter, investors likely hoped to avoid a letdown in its 2020 guidance. Energizer didn't disappoint on this front, either. For the upcoming year, management anticipates that net sales will increase by 9% to 10% against the $2.5 billion booked in fiscal 2019, with organic growth set to rise in the low single digits.

As the company laps its January 2019 acquisitions, gross margin is also expected to improve. The company sees a 10 to 40 basis point advance over the 40.2% gross margin achieved in 2019, as cost synergies and operational efficiencies will be somewhat offset by tariff impacts and foreign currency headwinds.

As for earnings, adjusted EBITDA is projected to fall between $610 million and $640 million, while diluted EPS is anticipated to land in a range of $2.20 to $2.53. Hitting this range will represent a considerable improvement over 2019 earnings per share of $0.78, which were weighed down by significant acquisition and integration costs throughout the year.