It's been a complicated year for investors in Stanley Black & Decker (NYSE:SWK), with a lot of moving parts having affected 2019 earnings and 2020 guidance. That said, the company's underlying progress is good -- not least with the rollout of the Craftsman brand -- and there are plenty of positive catalysts for next year and beyond. In short, the stock remains attractive, but to buy it, you are going to need a long-term view. Here's what you should know first.

Stanley's earnings this year are a mishmash of moving parts. Let's start with the headline guidance and analyst expectations. Management expects to earn $8.35 to $8.45 in adjusted EPS in 2019, and analysts expect $8.97 in 2020 accompanied by 3.4% revenue growth. 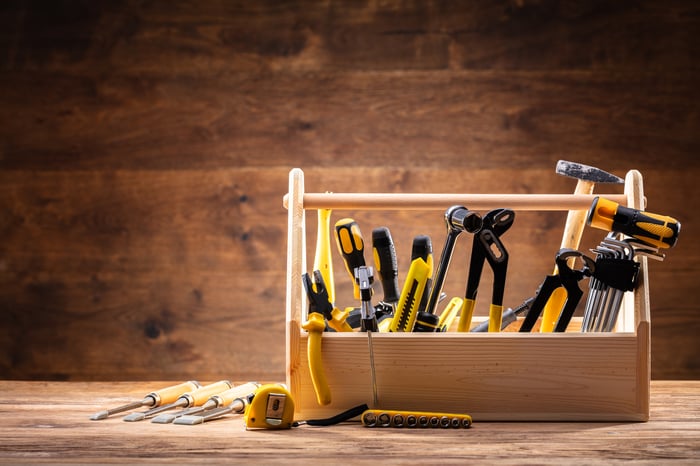 Investors can immediately do the math and conclude that the stock (about $160 at the time of this writing) trades at around 18 times 2020 earnings -- a valuation that doesn't look particularly exciting for a company generating just 6.7% earnings growth from 2019 to 2020.

But looking at it this way is far too simplistic in order to understand the investment proposition -- investing in stocks is rarely that easy. To better see what's going on, the table below shows revenue and earnings in 2018 and the trailing 12 months to the third quarter of 2019.

With this as a base, let's look at the key points around the company's earnings expectations for this year, next year, and beyond.

First, the most optimistic scenario sees that those $445 million in headwinds are likely to dissipate in the future -- currencies won't always move against the company, trade tariffs can't rise indefinitely, and commodity costs are already starting to come down. In fact, they could turn into tailwinds given the right circumstances.

Third, although the margin improvement plan includes an assumption of 4% to 6% organic revenue growth, the company looks capable of hitting it given some more-favorable end markets -- particularly in the automotive and industrial sectors. For example, the tools & storage segment (75.2% of year-to-date profit) is still on track for mid-single-digit organic growth in 2019. In a nutshell, the company is growing where it matters.

Fourth, during the recent earnings call, CFO Donald Allan said that 95% of the tariffs/currency/commodity headwinds hit the tools & storage segment in the quarter -- indicating that if and when they reverse, the positive impact will be seen in the company's most-important earnings driver.

Fifth, management also confirmed it was on track with its exciting growth initiatives in tools & storage, including growing revenue from the Craftsman brand (bought from Sears Holdings) to $1 billion by 2021 from around $600 million in 2019.

Sixth, note that the higher tax rate in 2020 is reducing the EPS outlook, so the forecast 6.7% EPS growth rate isn't entirely reflective of the company's underlying earnings growth potential.

Stanley Black & Decker is currently generating $1.9 billion in operating income despite suffering external cost headwinds of $445 million in 2019, and it plans to improve operating profit by $430 million to $640 million in a few years. All the while, it will be consolidating the tools industry and developing acquired brands like Lenox, Irwin, and Craftsman.

Clearly, there's plenty of ongoing growth potential with its initiatives, and the possibility of a boost to earnings because the earnings headwinds can turn into tailwinds at some point. It's an attractive investment scenario and makes Stanley Black & Decker look like a decent value for its growth potential.