Please ensure Javascript is enabled for purposes of website accessibility
Free Article Join Over 1 Million Premium Members And Get More In-Depth Stock Guidance and Research
By Taylor Carmichael - Nov 14, 2019 at 6:30AM

It might morph into an incredibly valuable financial services company, or even a super-bank.

Almost a decade ago, Marc Andreessen, the co-founder of Netscape who went on to start venture capital firm Andreessen Horowitz, wrote an essay in the Wall Street Journal, "Why Software Is Eating the World."  His arguments seem prophetic today. When he said "software companies are poised to take over large swathes of the economy," he nailed it.

The dominance of technology is perhaps most obvious when we look at the stocks that are the most valuable. 15 years ago, the top 10 stocks included General Electric, Walmart, various banks and oil companies. There were only two tech companies in the top 10: Microsoft and Intel.

Now our economy is dominated by internet mega-caps. There is one sector that has not yet been devoured by tech companies: financial services.    This situation is very likely to change over the next 10 years. Stock analysts have coined a term for the software and technology  that might start eating the banks: fintech. And the software company with the largest appetite is Square ( SQ -2.75% ). 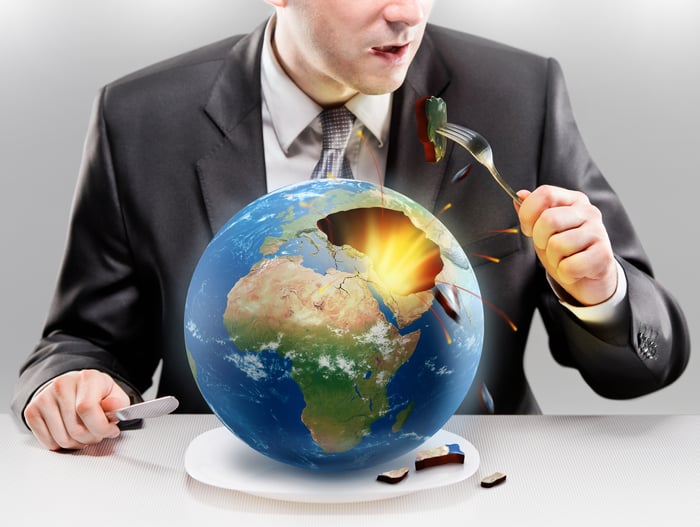 At its investor day conference early this year, JPMorgan Chase ( JPM 2.44% ) CEO Jamie Dimon mentioned Square. "They came up with this little dongle to process stuff and it was a great idea." Of course, the dongle Dimon is referring to is Square's tiny square device that can be inserted into a smartphone to make it a credit card reader.

Dimon went on to talk about all the growth Square has achieved in financial services by providing tools that allow a small business to keep track of its sales, inventory, and other financial data. "We didn't give them that opportunity," Dimon said. "Square did. Square said, 'You know what, since we know this company and they might need an advance this time of year, we might advance them $10,000 or $15,000 or $100,000.' They did all this stuff that we could have done that we didn't do."

Dimon probably has Square on his mind because the latter is making a move into actual banking services. Indeed, Square Capital has been making online loans to small businesses since 2014. Right now, the money is issued by Celtic Bank, but Square is looking to go into this business for itself. It's waiting for the federal government to approve it as an industrial loan company, allowing it to start providing capital and deposit services to its small-business clients.

Why does Square want to take the financial risk of loaning money? Consider how much information and knowledge Square has about the merchants in its network. When Square tracks your company's sales, sales growth, inventory, and expenditures, it gains a deep understanding of your business. There's no real need for a credit check or other personal information on the owner. In short, Square has information that ordinary banks may not have.

One of the more powerful advantages that a lot of tech companies enjoy are network effects. This year, Square introduced the Square Card, a debit card for small businesses. This card gives small businesses a 2.75% rebate on purchases made with other Square merchants. This is creating an ecosystem of value. Banks don't do this, and that puts them at a disadvantage.

The future of Square Cash

While Square Capital is providing financial services to over 2 million small businesses, that's nothing compared to the growth possibilities of Square Cash, its payment app for individuals. Square Cash allows people to transfer dollars online, similar to the Venmo service from PayPal. Square has even introduced a debit card called the Square Cash Card, so you can use Square Cash out in the real world.

In 2018, the company had 15 million active Square Cash accounts, twice what it had in 2017. "The biggest driver for us is the product has inherent network effects," CEO Jack Dorsey said. Dorsey talks about seeing a big spike in Cash App downloads on Friday, otherwise known as payday for a lot of workers, and that these people are sending cash to "friends, family, landlords, causing another download and another."

Square Cash is already doing a half-billion dollars in revenue. A big revenue driver is the wildly successful Square Cash Card. In a little over two years, it's gone from zero to 3.5 million card users.

Square has been very active with cryptocurrencies for a couple of years now. Via the Cash app, people are able to buy and sell bitcoin. Analysts at Nomura Instinet discovered that over half of the retailers they surveyed that use Square's technology at checkout would accept bitcoin as a form of payment. If and when Square starts introducing bitcoin payments into its ecosystem, a whole new growth driver will emerge.

Where will Square be in the next ten years? Consider that Square is already a bank to a lot of people. The company is transferring cash, issuing debit cards, providing loans, dealing in currency exchange. Over the next decade, Square might actually become a bank -- with a big advantage over existing banks, because of its vast knowledge of its clients and their needs, and the powerful networking effect the company enjoys.