Please ensure Javascript is enabled for purposes of website accessibility
Free Article Join Over 1 Million Premium Members And Get More In-Depth Stock Guidance and Research
By Jennifer Saibil - Nov 14, 2019 at 8:40AM

The luxury accessories company still has a lot of work to do before it can really see growth.

Luxury goods is a growing global retail segment, and some of the best-known brands in the industry -- Coach, Kate Spade, and Stuart Weitzman -- are owned by luxury goods company Tapestry ( TPR -3.09% ). But while the Coach brand continues to see revenue growth, the other, newly acquired brands have been creating a financial headache for the parent company.

The company, originally called Coach, changed its name to Tapestry with the $2.4 billion buyout of rival Kate Spade in 2017. It had already acquired high-end shoe brand Stuart Weitzman in 2015 for $574 million. While the company continues to tout the benefits of working through a sum of parts, it's not so clear that these acquisitions are working in its favor.

Total sales were down in the first quarter of fiscal 2020 to $1.36 billion from $1.38 billion in the prior-year period. While that's a blow, it doesn't tell the whole story. 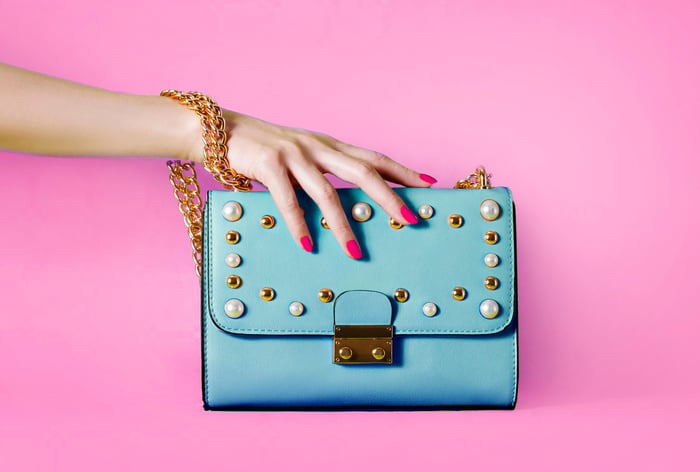 Some of the reasons thrown around for Kate Spade's sales slump were China tariffs and quick promotions. The company has tried to scale back sales and stimulate full-price sales, but customers are not yet biting. So while a better-than-expected quarter helped Tapestry's share price rise, there's no reason to predict that investors are going to see similar results in the next quarter without management rolling up their sleeves and getting their hands dirty.

Part of the problem is that Kate Spade targets millennials, but millennials may not like it back. Coach is an older company with a medium (for luxury goods, anyway) price point that targets a more gentrified crowd. Kate Spade, however, has been an up-and-comer that is focused on new and chic, a step out of old-money. It electrified audiences in the 1990s when it first came out with its revolutionary fabric handbags and clean, simple designs, a wholly American look that was a radical departure from classic European luxury goods.

Today, the market has become wealthier, and the HENRYs, or high-earner, not-rich-yet prospective customers, are willing to spend more for high-end luxury goods. Kate Spade may not be up to speed for their liking. A Deloitte study found that the luxury goods market is growing at double-digit rates fueled by the HENRYs, who embrace technology and love to shop online.

The brand has seen falling sales since it was acquired by Coach, and the company has been trying to refurbish the brand's image to keep up with the times. The installation of creative director Nicola Glass in January 2018 was meant to polish its style, but the company is still trying to unload previous merchandise.

Both Kate Spade and Stuart Weitzman brands have been struggling with changes in U.S. retail that have seen the closing of mall stores and the growth of online shopping. Coach's struggle has been less so as it has successfully expanded into Europe and China.

However, Tapestry still sees the Kate Spade brand as a popular name that will eventually cash in. Newly appointed CEO Jide Zeitlin told Fortune magazine that he has "no regrets. ... [There is] no problem with the brand's core equity."

He also noted that Coach went through a similar struggle a few years ago when it closed mall stores and scaled back huge amounts of sale inventory. It was able to turn itself around and emerge as a leader in luxury retail.

Coach accounts for more than two-thirds of Tapestry's sales, and even with its failing brands, the company comes in at No. 13 on Deloitte's list of top global luxury goods companies.

With sales continuing to fall at Kate Spade and Stuart Weitzman, it's not likely to see Tapestry's earnings results rebound anytime soon. But it might be a good time to lock in on a low stock price as the company works to improve its bottom line.

Why Tapestry Stock Jumped 33% in February