Please ensure Javascript is enabled for purposes of website accessibility
Free Article Join Over 1 Million Premium Members And Get More In-Depth Stock Guidance and Research
By Billy Duberstein - Nov 15, 2019 at 8:00AM

These two stocks sport sky-high dividends and are screamingly cheap.

When a dividend-paying business falls on hard times, the sell-off can lead to some very attractive yields, just by virtue of the stock going down. If such headwinds prove temporary, courageous investors may not only benefit from some very nice payouts, but also reap the gains from stock appreciation.

Here are two high-quality stocks that currently sport very high dividend yields due to near-term headwinds, but which have a good chance of turning things around. 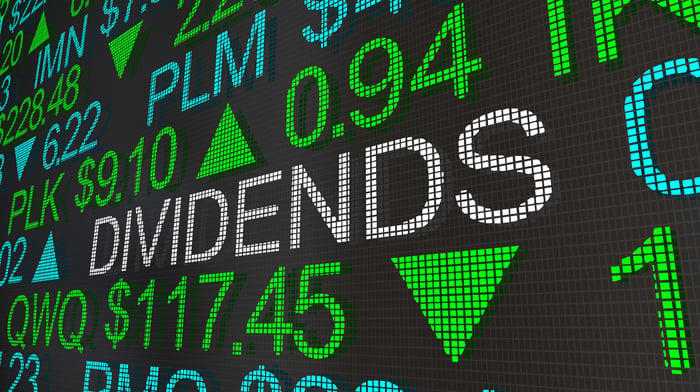 Crestwood had been on a tear this year, with shares up over 45% for 2019 as of mid-September. However, recent events regarding a key customer have caused shares to fall, halving the year's gains. 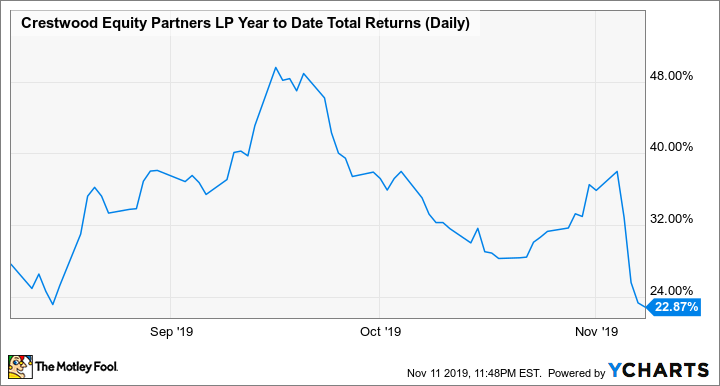 The current concern is due to Chesapeake Energy ( CHKA.Q ), Crestwood's main customer in the Niobrara formation of the Powder River basin. Chesapeake just warned shareholders in its recent quarterly report that if oil and/or gas prices don't improve, Chesapeake may violate its debt covenants, which could affect its ability to meet its financial obligations in the agreement.

Looking at the impact this could have on Crestwood, last quarter, its Jackalope system in the Powder River Basin accounted for about 15% of the company's gathering volumes. Crestwood had actually just bought the other 50% of the Jackalope system back in April (it had previously been a joint venture), essentially doubling down on the area. Not only that, but Crestwood is investing in an expansion there, which is set to come online in the first quarter of 2020.

However, these concerns are likely overblown. In 2017, Crestwood restructured its contract with Chesapeake to provide minimum revenue for 20 years until Chesapeake achieves certain volumes. It's also unlikely that Chesapeake would stop producing in the basin or void the contract there with Crestwood. Crestwood's systems are essential for Chesapeake to bring oil and gas to market, and the Jackalope system actually lowers Chesapeake's overall costs, versus trucking oil and gas from its well sites.

If the worst happens and Chesapeake files for bankruptcy, debt holders would then take over and likely utilize Crestwood's assets. Finally, in its recent quarterly report, Crestwood indicated it was in "late-stage discussions" with third parties in the Powder River basin to utilize Jackalope outside of Chesapeake, diversifying its customer base there.

Crestwood's stock has fallen about 15% since the announcement and is down over 20% from its 52-week high. That's caused the company's dividend yield to increase to a whopping 7.6%, which is well covered by Crestwood's distributable cash flow almost two times over, leaving plenty of room for Crestwood to maneuver around Chesapeake's troubles.

Given the fear-driven sell-off, now may be a good time for investors to pounce on the opportunity.

The world's largest movie theater chain AMC Entertainment ( AMC 7.81% ) has suffered from concerns over the future of movie going, due to the rise of online streaming services. The company's sizable debt load, which was amassed after AMC bought three other theater chains in 2016 and 2017, is another concern. A huge sell-off over the past three years has caused AMC's dividend yield to skyrocket to 8.3%. 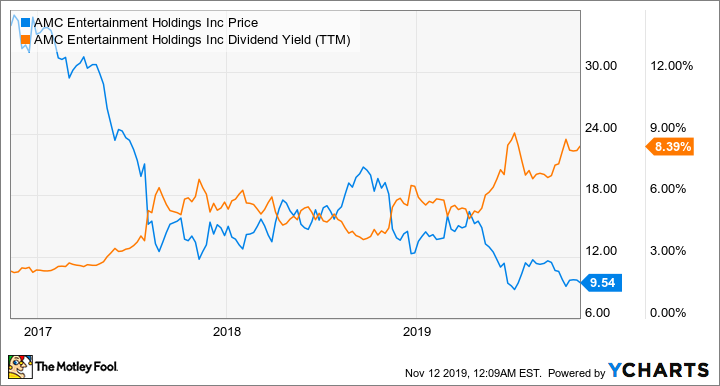 Beyond these general concerns, AMC shares have been especially affected in 2019 by the implementation of accounting rule ASC 842. The new rule forces companies to count operating leases as debt, which has the effect of doubling AMC's already-high debt levels. At the same time, the new standard doesn't allow companies to add back rent expense to its EBITDA (earnings before interest, taxes, depreciation, and amortization). In fact, it reclassifies some finance lease interest as rent expense, actually decreasing reported EBITDA. Many companies are judged on debt-to-EBITDA levels, so the accounting change makes AMC's leverage ratios look especially ugly.

Of course, none of this affects AMC's overall cash flow or actual debt levels, but the effect could lead computer algorithms used by large investment firms to think AMC's financials and balance sheet are far worse than they are.

Meanwhile, AMC has been an innovation leader. Its A-list subscription program, launched in the summer of 2018, seems to be a hit, recently exceeding 900,000 subscribers -- approximately double the company's initial expectations. In addition, AMC has a number of ongoing growth initiatives, including showing football games in its theaters and launching a digital streaming service for rental downloads.

AMC is also the exclusive partner of the government of Saudi Arabia and will open 40-50 theaters in the country over the next four to five years. AMC has only opened one theater so far in Riyadh, but management says it does 11 times the revenue of AMC's average theater due to pent-up demand in the country.

And of course, AMC is still installing luxury recliners in theaters, especially in Europe, where it continues to see returns of 50% or more on those investments.

All of this enabled AMC's admissions to outperform the rest of the industry by a whopping 560 basis points last quarter, and AMC's food and beverage revenue was also up strongly. This all added up to constant-currency revenue growth of 9.3% and adjusted EBITDA growth (adjusting for ASC 842) of 33.1% in Q3 -- pretty good for a "declining business." And this was in a quarter when the overall Q3 domestic box office only grew 3.6% over last year.

Though AMC's economics are hidden due to ASC 842 and its investment on luxury recliners, according to its April investor presentation, AMC generates around $300 million in adjusted free cash flow per year, based on only maintenance capital expenditures.

At today's stock price, AMC only trades for about 3.3 times that adjusted free cash flow number. So though the company has a high debt load, mere stability from AMC going forward could make today's stock price look like a bargain a few years out.