Investors are optimistic heading into the upcoming earnings report from TJX Companies (NYSE:TJX). The off-price retailer isn't seeing record growth like some retail peers such as Target. But it has won consistently rising customer traffic in 2019 through strength across its Marshalls, T.J. Maxx, and HomeGoods franchises.

On Tuesday, that positive shareholder outlook will be tested when the company announces fiscal third-quarter results and issues its forecast for the all-important holiday shopping season.

Let's look at what investors can expect to hear from the retailer. 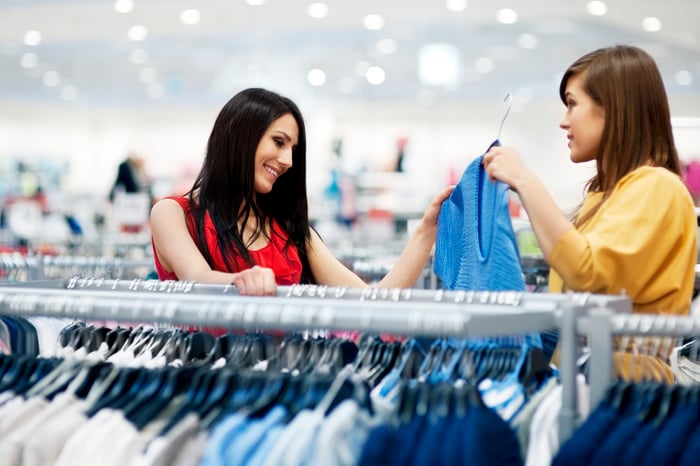 Most investor focus will be trained on the core growth metric of comparable-store sales. That figure slowed for the second consecutive quarter in Q2, landing at 2%, compared with 5% in the first quarter. The deceleration put the retailer behind discount giants like Target and Walmart, which posted 3% gains. But TJX's business isn't exactly struggling. Comps are looking strong across each of its brands, thanks to increased customer traffic. In fact, shopper volumes have improved for 20 consecutive quarters in the U.S., which is a streak that neither Walmart nor Target can claim.

The company has predicted another slowdown for the third quarter, with comps rising 1% to 2%. That boost would translate into a modest win for the business, given that comps soared by 9% for the core Marshalls and T.J. Maxx franchises and by 7% overall in the year-ago period.

TJX has an attractive expansion opportunity, thanks to a small store base compared to management's long-term ambitions. The company has stores spread across key markets including the U.S., Canada, Europe, and Australia. CEO Ernie Herrman and his team believe TJX ultimately has room to operate more than 6,000 stores just in these geographies, up from around 4,400 today.

This week, we'll get another key update on that expansion outlook. Watch for the consumer discretionary company's store count to rise by about 30 locations, which would keep TJX on track for its 4% annual increase in square footage. Herrman will likely comment on the financial strength of TJX's latest store launches, too, in addition to the efficiency of well-established locations that have matured for decades in many major metropolitan areas.

Executives said back in late August that they were entering the third quarter with plenty of financial resources. They also claimed that there were tons of buying opportunities to scoop up discounted clothing and home goods from vendors. Investors will find out whether the company was able to take advantage of that situation. Success here would show up most directly in gross profit margin. Look for that figure to hold roughly steady with the prior-year period's 28.9%.

As for the outlook, the chain's Q2 update called for moderate sales growth in the second half of the year, with full-year comp sales growth expected to come in between 2% and 3%. Profits should rise at a faster clip, thanks to steady margins plus reduced tax expenses. With the start of the peak holiday season just a few days away, management will be in a good position to update these forecasts, but the new outlook will still reflect uncertainty in predicting how customers, competitors, and suppliers might behave during the crucial fourth quarter.