This week, T-Mobile (NASDAQ:TMUS) announced that CEO John Legere would be stepping down at the end of April following an "enormously successful run." Legere will have served seven and a half years as T-Mobile's chief executive when he departs. Over that time, Legere transformed T-Mobile from a struggling No. 4 player into the third-largest wireless carrier in the U.S., addressing numerous customer pain points with over a dozen Un-carrier initiatives.

With its proposed merger with Sprint in the final stretch, T-Mobile is about to get even bigger. Here are the three most disruptive moves that T-Mobile has pursued under Legere's leadership. 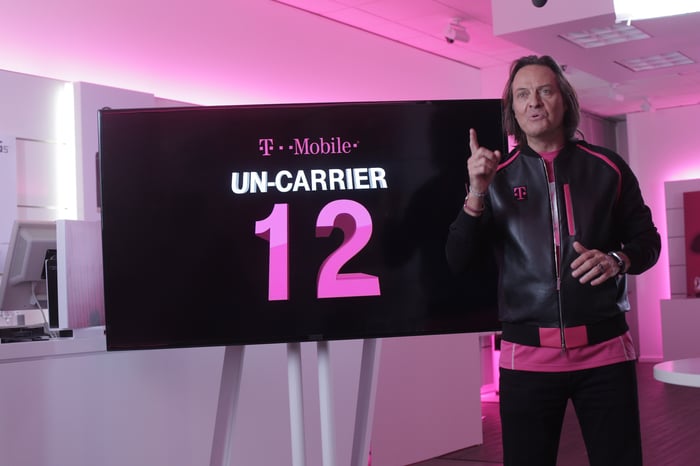 T-Mobile made 12 Un-carrier moves over the years, and is starting back at Un-carrier 1.0 for the New T-Mobile. Image source: T-Mobile.

First and foremost, Legere is widely credited with ushering in the subsidy model's demise with Un-carrier 1.0 back in 2013. Once upon a time, cellular customers had to sign two-year service contracts in exchange for huge subsidies from carriers to help pay for the latest and greatest smartphones. However, the subsidy model was rife with flaws.

The subsidies masked the true cost of smartphones to consumers, and it took a few years to become accustomed to the sticker shock. The model contributed to price obfuscation within the smartphone market, and varying prices also meant that the subsidies were worth different amounts to different consumers. Consumers that were buying high-end handsets would often realize more value from subsidies than those buying cheaper devices, which doesn't seem fair. Consumers also didn't like the contractual commitments and the hefty early termination fees they faced if they wanted to switch service providers.

In contrast, there is much greater cost transparency with installment plans. People know exactly how much their phones cost, reinforcing the perceived value of smartphones while recognizing how much they owe in financing. The tethering effect is the same: Canceling service results in a cash outlay as the remaining balance becomes due. But paying a balance that you owe feels better than paying a punitive "fee."

The flip side is that installment plans may be contributing to upgrade cycles getting longer. Under the subsidy model, consumers would upgrade like clockwork every two years when their contract was up and they were eligible. Under installment plans, consumers realize that they don't need to upgrade as often and instead choose when an upgrade is worth spending the money. The average upgrade cycle in the U.S. is now approaching three years, according to Strategy Analytics.

Technically, these were two separate initiatives, but they are closely related. Un-carrier 6.0 was announced in 2014 as "Music Freedom" and exempted data consumed by certain music-streaming services. All of the biggest services, including Spotify and Apple Music, participate in the program.

The following year, T-Mobile would detail Un-carrier 10.0, "Binge On," similarly not counting video data toward data caps. Binge On is a bit more complicated, as video content is far more bandwidth intensive than audio content. T-Mobile downgrades the video quality in an effort to reduce the bandwidth requirements.

Binge On attracted various forms of controversy. The Electronic Frontier Foundation (EFF) argued that T-Mobile was indiscriminately throttling all video, a charge that Legere shot back at on social media in characteristically profane fashion. More broadly, net neutrality proponents also contend that zero-rating data programs harm competition, as they inherently favor larger companies that can pay to sponsor that data usage.

The wireless industry was ripe for disruption, and Legere saw an opportunity to make his mark. With T-Mobile shares up over 620% since naming Legere CEO, it's safe to say the Batman-loving, magenta-donning, slow-cooking exec has done just that.