Please ensure Javascript is enabled for purposes of website accessibility
Free Article Join Over 1 Million Premium Members And Get More In-Depth Stock Guidance and Research
By Mark Prvulovic - Nov 19, 2019 at 11:04AM

Could this tarnished pot stock possibly stage a turnaround? Most don't think so.

Like the vast majority of pot stocks, MedMen Enterprises ( MMNFF -2.15% ) has been taken to the proverbial cleaners, so to speak. The company has lost almost four-fifths of its market value since the beginning of the year and has become one of the worst-performing pot stocks in the entire industry. While other cannabis stocks have seen similar declines and have now become potential value investments, there's still a lot to question about MedMen Enterprises before anyone should even consider buying its shares.

Whether that be the company's ongoing financial losses, its recently suspended PharmaCann acquisition, or high executive turnover, Wall Street has more than enough reasons to be bearish on MedMen. Let's go through a few of these reasons and decide for ourselves whether this pessimism is justified. 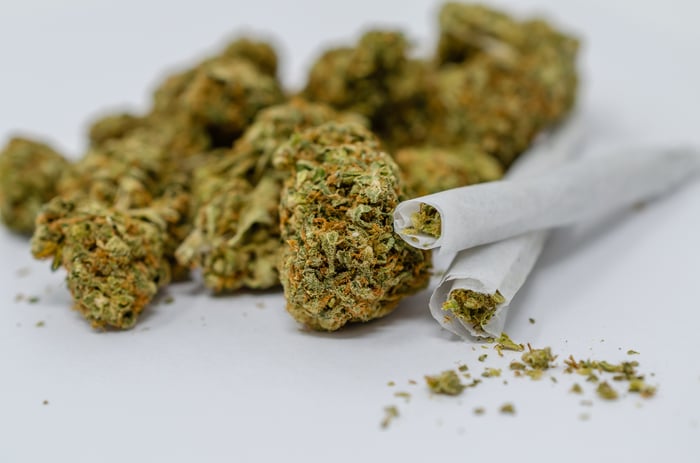 In short, MedMen is spending far more than it's making. Its fiscal Q4 2019 revenues came in at $42 million, while its losses increased to $83 million. While it's common for cannabis companies to be unprofitable -- although investors are getting increasingly tired of it -- MedMen's losses are extreme. The company's market cap is just $683 million, but it has only $33.7 million in cash on hand. Unlike other companies such as Canopy Growth, which has billions of dollars of cash to help cover future growth expenses, MedMen has frighteningly little financial breathing room.

Investors need to ask themselves where this money is going. In contrast to other unprofitable pot stocks that are growing via acquisitions, MedMen seems to be spending its money on non-value-adding expenses. The company spent over $244 million in general and administrative expenses in fiscal 2019, with more than $95.3 million of that going to salaries and benefits. Considering that MedMen made only $130 million in total sales for the fiscal year, the company is spending almost twice its revenues just on G&A expenses, let alone any acquisitions.

This is also a case of excessive executive compensation. The company paid out $32.1 million in share-based compensation to its executives (primarily to its two co-founders, Andrew Modlin and Adam Bierman). Taking all this into consideration, it's easy to see how investors and analysts alike are flabbergasted by how the company has been run.

MedMen Enterprises would have run out of money and hit a liquidity crisis earlier in the year if it hadn't received $280 million from Gotham Green Partners a few months ago. While the company bought itself some breathing room, now it's clear MedMen will have to do something about its remaining $34 million in cash, whether that be looking for another financing round or a drastic reduction in expenses.

Raising money in the cannabis market is much more difficult now than it was a year ago. First, investors are more hesitant about putting money into the market now that the industry has seen major losses. At the same time, MedMen's falling stock price makes it harder to raise money, as pot stocks tend to accomplish this by raising more equity. Now that MedMen is trading at around $1 rather than the $4 range it used to trade at, the company would have to issue many times more shares to raise the same amount of money, something that would further dilute existing shareholders.

As for the latter option of reducing costs, this doesn't seem likely. MedMen's former CFO Michael Kramer made it his mission to cut costs, and he was terminated in October. This adds to a worryingly long list of executives who have left the company, including COO Ben Cook, General Counsel Lisa Trager, and MedMen's previous CFO James Parker, who ended up suing MedMen and accused the company of wasting the shareholders' money.

As such, it might be a good thing after all that MedMen canceled its $682 million acquisition of PharmaCann. This is especially true considering that a number of PharmaCann's retail and cultivation assets would have required major capital expenditures, something that MedMen can't afford right now.

If the PharmaCann deal had gone through, MedMen would have expanded its operational presence across the country, becoming one of the larger multistate operators. However, now that this isn't a possibility, the company will need to figure out what to do with its current operations. MedMen's main territory is in California, with a secondary presence in Florida, Nevada, and New York. Currently, the company owns 17 retail licenses for California, but since it already operates 13 stores in the state, MedMen has only limited room to add dispensaries in the area.

Even with the stores MedMen already has in place, revenue growth has been slow. Sales have risen by 15% in the past quarter, a figure that isn't that impressive in the high-growth world of pot stocks. California, in particular, doesn't have enough dispensaries to meet demand, leading to a growing black market for cannabis that has now eclipsed its legal counterpart. Coupled with the already hefty taxes businesses face in the state, cannabis companies like MedMen are struggling to grow in this environment.

What could be MedMen's best hope lies in Florida, where the company opened its seventh store recently, with an additional five more planned for 2019. However, while cannabis use in the state is skyrocketing, entrenched competition could be a major hurdle for MedMen. When compared to companies like Trulieve Cannabis, which has captured 50% of all cannabis sales in Florida, MedMen faces an uphill battle even in this highly growing market.

In short, no. The only people who are making money with MedMen seem to be its management team, which has pocketed tens of millions collectively while the company continues to hemorrhage capital.

If this were any other cannabis company, one could make an argument that shares have fallen enough to potentially be a value buy. In this case, however, there are just too many problems. This is one stock investors should stay away from.