One of the higher-profile cannabis companies in the U.S. is MedMen Enterprises (OTC:MMNFF). MedMen is definitely the most "Hollywood" of U.S. cannabis operators, as the company has spent big on branding and advertising in its home city of Los Angeles -- even hiring a famous Hollywood director to make a promotional commercial for the company this February.

However, there's danger in investing in companies based in Hollywood, especially highly promotional ones. That's true of both the entertainment world as well as the cannabis space. When someone talks a big game, investors need to make sure it's backed up by fundamentals.

Last Tuesday, MedMen had two incidents heaped on top of each other that once again reminded investors of the big dangers lurking in the cannabis space in general, and MedMen specifically. 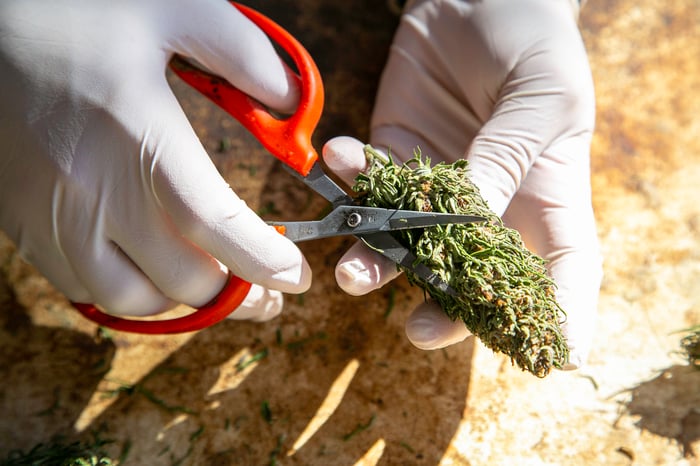 On Oct. 8, MedMen announced that it would be canceling its all-stock, $682 million acquisition of PharmaCann, a deal that would have greatly expanded MedMen's footprint to several states in the mid-Atlantic coast. The deal, which had been announced exactly a year ago, was supposed to transform MedMen from a primarily California and West Coast-oriented cannabis company into a national player. So what went wrong?

More than MedMen could chew

While several reasons were given for dropping PharmaCann, most boil down to MedMen having expanded too far, too fast. Although the company would have acquired several retail locations and cultivation facilities from PharmaCann, MedMen also revealed that several of these assets would have required "significant capital expenditures."

MedMen also pointed out that the value of cannabis stocks had materially declined across the sector since the deal was announced. That actually shouldn't affect the deal directly, as it appears the number of shares to be issued to PharmaCann was fixed, no matter what the stock price -- though this may have soured PharmaCann's side of the deal.

More importantly, if MedMen needed to raise money to invest in these acquired assets, the decline in MedMen's stock price would have made things difficult. Cannabis companies tend to fund operations and acquisitions by raising money through the issuance of equity or convertible debt, both of which become more expensive when stock prices are down. Thus, MedMen found itself more capital-constrained going forward with a stock price of $1.20 than it did this time last year when its stock was around $7.50.

CEO Adam Bierman said, "We don't want to be raising money at the stock prices, which are overly diluted, in order to go fund projects that aren't going to be near- or mid-term accretive."

When examining MedMen's financials, it's easy to see why the company preferred to scrap a capital-intensive deal. As of its last reported quarter, MedMen had about $100 million in debt versus just $22 million in cash, and is also burning through that cash at a rapid rate.

It's perhaps not encouraging, then, that in conjunction with the PharmaCann cancellation, MedMen also announced it would be replacing CFO Michael Kramer -- the second CFO to go in less than a year (and MedMen's prior CFO is actually suing the company). MedMen didn't give a reason for Kramer's departure, only saying that it was promoting Corporate Development Officer Zeeshan Hyder to the CFO role. The move follows a wave of additional executive departures earlier this year, which is never a good sign.

MedMen isn't coming up totally empty-handed in the PharmaCann deal, though. It's actually receiving some PharmaCann assets, despite the cancellation. Usually in a canceled transaction, the acquiring company has to pay some sort of breakup fee, but in this case, MedMen is receiving one retail license, one retail location, and a cultivation facility in Illinois, along with a vertically integrated facility in Virginia from PharmaCann.

The company isn't getting these assets for free, however. MedMen had recently lent PharmaCann about $21 million in preparation for the merger. So, the company is essentially buying the above assets for this amount, as the loan will be forgiven upon the transfer.

The canceled acquisition and CFO change are, unfortunately, just more symptoms of the same problem, which is that MedMen seems to have expanded too quickly for its own good. The company has a growing debt pile, which doesn't jibe well with last quarter's whopping $53.3 million operating loss. That's a pretty good summation as to why MedMen's stock has plummeted by about 80% over the past year, it's canceling major acquisitions, and senior executives are fleeing in droves.

Management now claims it is pivoting toward executing for greater profitability in the company's home market of California. But whether the new "refocused" MedMen can be profitable anytime soon is a dubious proposition. After all, California is dealing with a huge black market problem at the moment.

All of these factors add up to why investors should steer clear of this fashionable stock, at least until the company proves it can back up its big talk with actual financial results. Investors will get their next opportunity to analyze MedMen's financials when it reports its fiscal fourth quarter on Oct. 28.